This exhibition features more than 160 artifacts on loan from more than 20 museums and private collections across Europe and North America. Rare and evocative objects include a caribou antler war club, waterproof bear gut parka, and dall sheep horn bowl collected by Captain Cook’s 1778 expedition. Here are just a few examples of objects visitors will see in the exhibition. 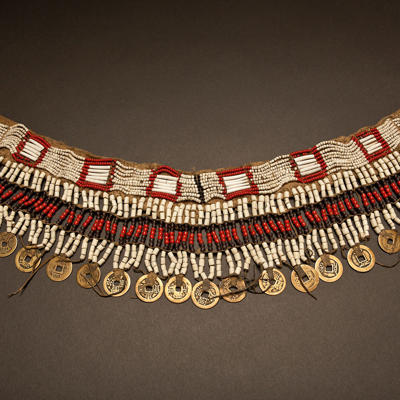 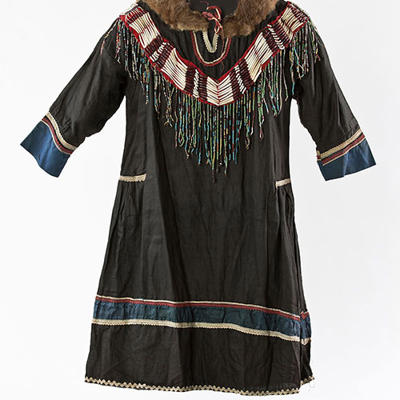 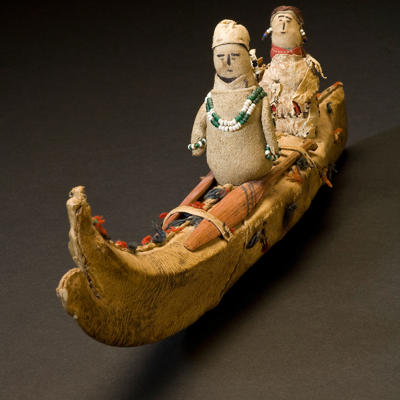 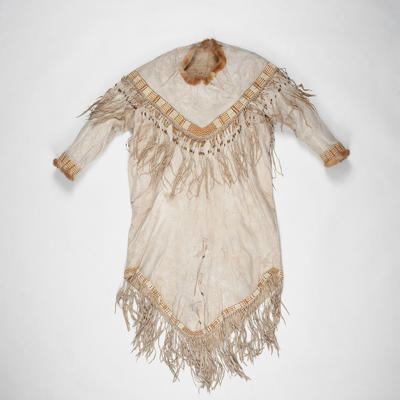 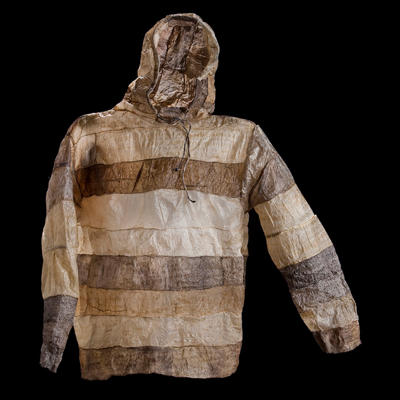 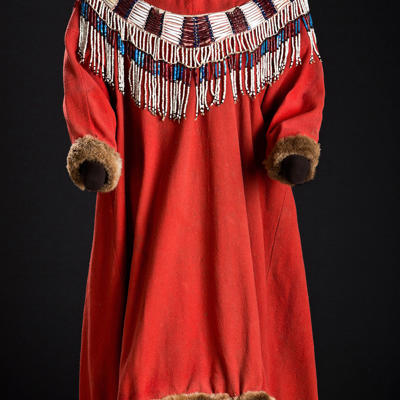 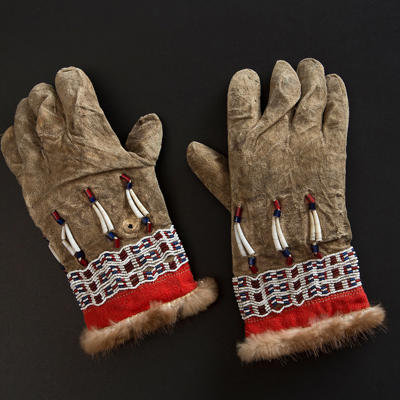 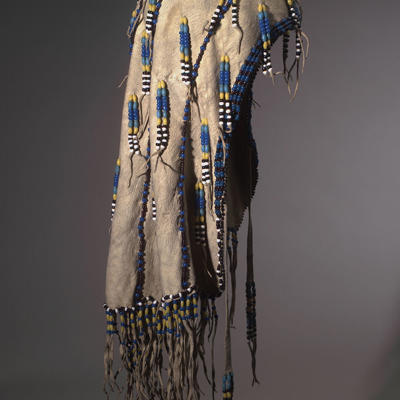 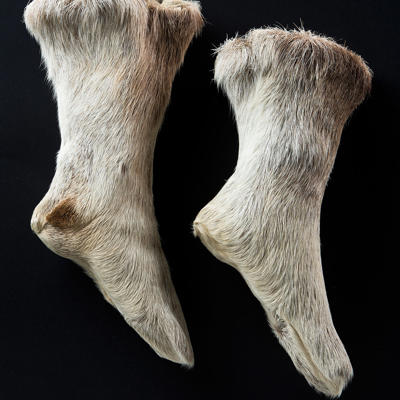 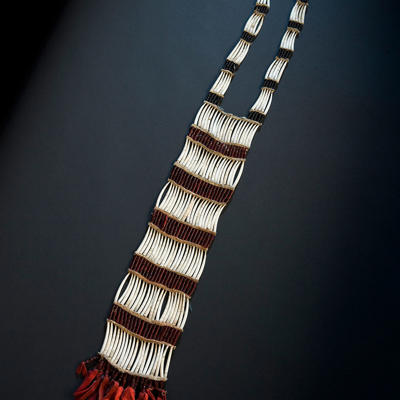 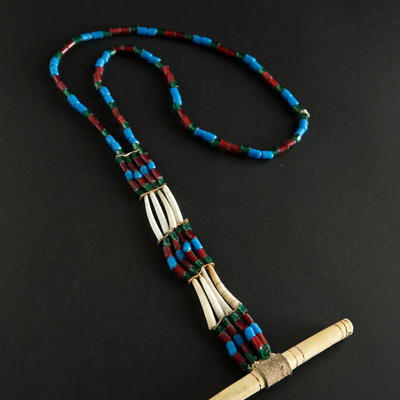 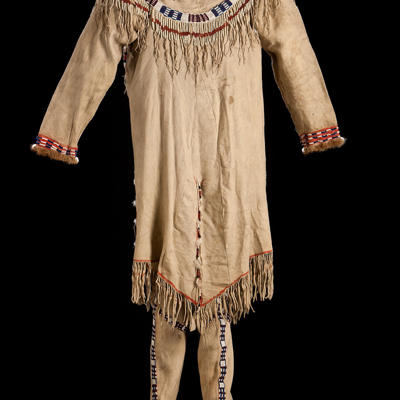 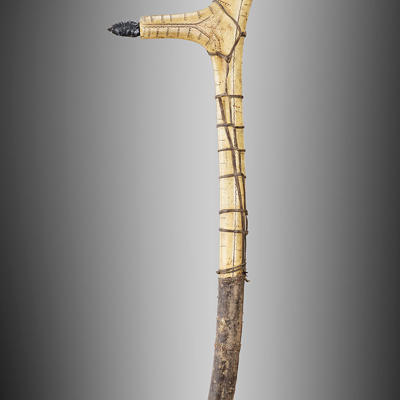 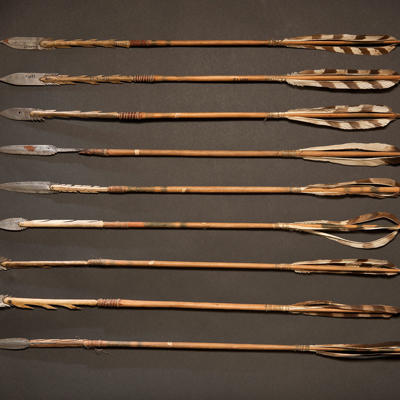 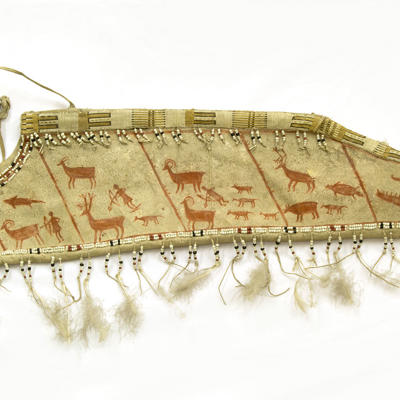 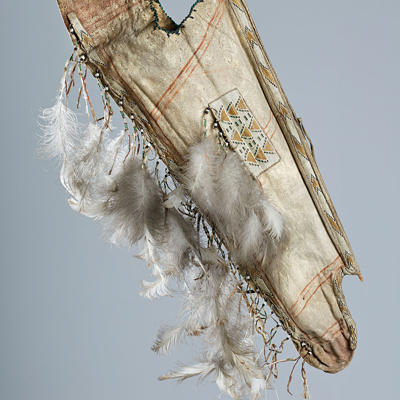 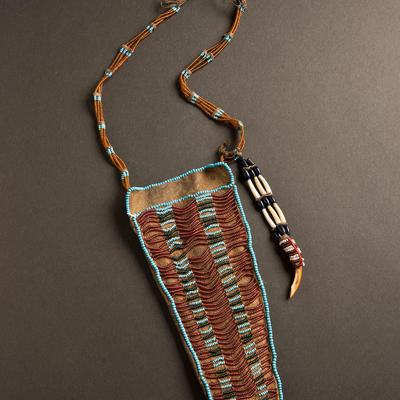 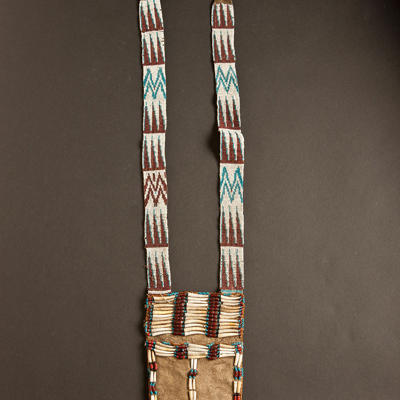 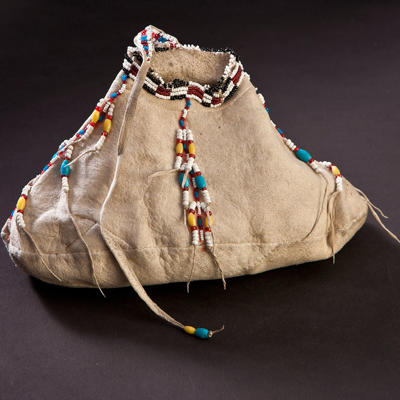 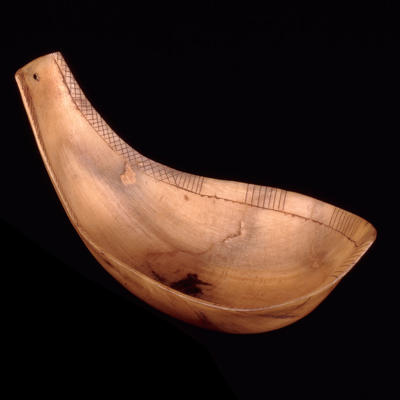 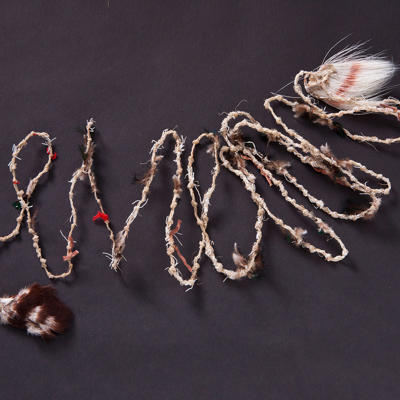 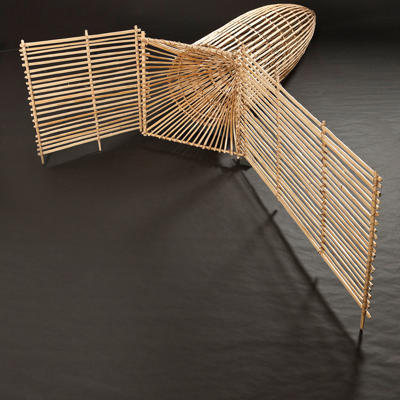 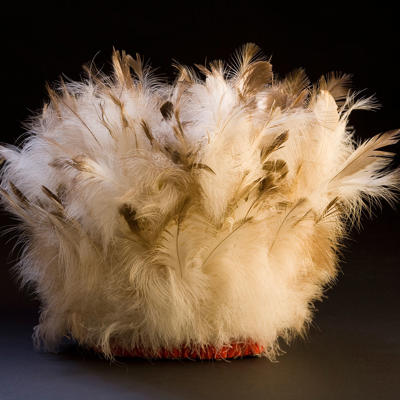 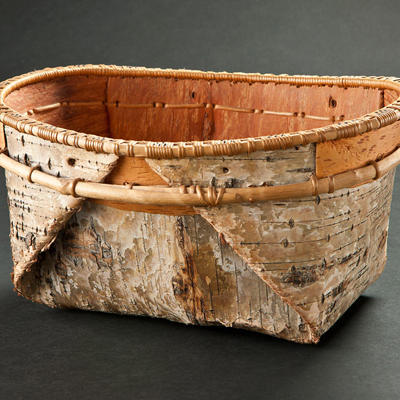 The item represents the trade that was occurring with Dena’ina during the 19th century. It is highly decorated with signs of status and wealth through its use of beads, Chinese and French coins and dentalium shells. Although it is listed as a belt, it may in fact be a band of ornamentation for a tunic or dress. It was likely owned by a qiy’u, or rich woman.

The elaborate use of beads and dentalium shells adorning this dress suggest it was worn on special occasions such as potlatches. The beadwork was originally sewn onto a strip of red wool. When beaded garments wear out, the beadwork often is saved and reattached to new garments. Collection: Private collection, on loan to the Anchorage Museum

The Dena’ina likely learned to make seal skin baidarka or biqidin (kayaks) from the Alutiit of lower Cook Inlet. Men made the birch frames and women covered them with seal skins. One- and two-holed baidarkas were used for hunting, while those with three holes carried a passenger in the center. These kayaks were used for travel and for hunting sea mammals on Cook Inlet and the lower portions of major rivers.

The man’s tunic, cut to a point in front and back and high on the sides facilitated easy, unencumbered walking while providing an extra layer where needed for windbreak and warmth. The back, cut generously with wide sleeves at the armholes, allowed for unrestricted arm motions with a bow and arrow or spear. Neck and wrist openings were small and lined with fur, keeping out insects and cold air.

Helen Dick had wanted to make a bear gut raincoat since she was a young girl. She had promised her grandmother she would make one. Helen made this parka in 2008, noting it was made from intestines of four different bears. The darker strips of intestine are from bears taken during berry season. Completing this parka gave Helen a great sense of accomplishment for having kept her promise to her grandmother and having this rare item preserved by the Anchorage Museum.

This dress has been passed down through five generations of the Rickteroff/Roehl family and originally may have been made of hide.

These gloves, decorated with dentalium shells to signify rank, were once owned by Gabriel Trefon, qeshqa in Nondalton. Trefon (1897-1964) is remembered as a leader with great foresight who could “see into the future.” An innovator who was the first inland Dena’ina to own an outboard motor, Coleman lamp, and snowmachine, he lived with respect for traditional Dena’ina values.

Collection: Private collection, on loan to the Anchorage Museum

This stunning hood is part of a complete matching outfit of tunic, moccasin trousers, gloves, small bag and quiver.

These Caribou skin socks would have been worn inside a set of boots. Caribou hair is hollow and is considered an excellent insulator that kept the wearer’s feet warm even during the coldest part of the winter.

This dentalium necklace was used by a qeshqa (the traditional leader) at potlatches as part of the dancing outfit. The earliest known owner of this particular necklace was Big Chilligan. It was potlatched to Simeon Chickalusion in 1930 and to Shem Pete in 1957. Dentalium, or k’enq’ena, are the shells of a mollusk that were traded through tribes all along the northwest coast of North America as a form of wealth.

While a girl was secluded at puberty, she used a bone tube for drinking. The tube was on a beaded necklace and was often decorated with incised lines. Puberty seclusion continued in some Dena’ina communities into early 20th century. In the early 1930s, when anthropologist Cornelius Osgood collected this piece in Old Iliamna, many Dena’ina women still knew of the practice from their own girlhood experiences.

The extensive use of dentalium shells on this outfit suggests it was owned by a man of high status. These clothes are an excellent example of Dena’ina craftsmanship.

Dena’ina war parties were led by particularly skillful and powerful warriors known as ezhge’en, which Billy Pete translated as “heroes” or “champions.” They wielded clubs of caribou antler which were soaked in oil to add strength and weight. Den’aina traditional narratives include factual histories of wars waged with other Dena’ina groups, with the neighboring Yupiit, the Alutiit and the Russians. These stories provide a perspective on the history of the region that was once the exclusive and vigorously defended homeland of Alaska’s most populous group of Athabascans.

Arrows were the principal weapon for taking game. The shafts of various lengths were made from cedar driftwood, spruce or birch and were fletched with the feathers of eagles or other raptors such as hawks. Before contact with Europeans, the arrow points were made of stone, bone, antler or, more rarely, copper. Post-contact, use of metal points became more common. When these arrows were collected in 1883 from Tyonek, the Dena’ina were already moving toward using guns as the primary weapon for hunting big game animals.

Quivers for carrying arrows were made from tanned caribou or moose hide. Many were highly decorated with fringe, quillwork, beadwork and painted images of hunters and prey. They also served as a record to tell a story of particular hunting accomplishments. This particular quiver features images of oceangoing skin boats and kayaks as well as two hunters on snowshoes.

Before firearms were widely available, a Dena’ina man almost always had a bow and arrows that were carried in a quiver wherever he went. The bow was his main weapon for hunting and self-defense. Because every man had his own quiver, he would want to personalize it. This usually meant decorating it with feathers and porcupine quills or beads, and drawings made with red ochre paint.

The beaver tooth attached to this knife probably had both spiritual and functional purposes. The beaver tooth as an amulet would represent the spirit of an animal that is known to be a hard worker and good wood gatherer. On a functional level, this beaver tooth was used to sharpen the knife the hunter carried.

Fire bags were used to carry fire-making materials, including fire sticks for strap drills. Fire bags were also used to transport fire in the form of burning embers.

The Dena’ina made several kinds of bags from caribou skin for transport and storage of various objects. For example, a hunter might carry sinew thread and a needle in case he needed to repair his clothing while hunting. The Upper Inlet Dena’ina used the skin from the legs of caribou and Dall sheep for making bags. Dena’ina also made bags from bear intestines.

This bowl was collected during the 1778 voyage of Captain James Cook. Dena’ina artifacts from the Cook expedition are the oldest known artifacts collected from the Dena’ina. To make a sheep horn bowl, the Dena’ina placed the horns in hot water to soften them before carving them into spoons and bowls.

Credit: © The Trustees of the British Museum

Traditionally, Dena’ina used counting cords as a type of calendar, tying knots or beads to count days or record special events. In the exhibition, visitors can make their own counting cords.

This whitefish trap commissioned by the Anchorage Museum involved three generations of the Dick family. Helen is a well-respected Dena’ina elder, and she and her husband Alan Dick supervised the construction by their son, Wayne, and Wayne’s son, Bryan. Whitefish were once an important food source in the spring, helping people avoid starvation before the arrival of the salmon. In the exhibition, visitors can see the trap as well as a short documentary film about its making.

This feather headdress was said to have been used only by Dena’ina shamans. The earliest known owner was Big Chilligan. In 1931, it was potlatched to Simeon Chickalusion and, after his death in 1957, to Shem Pete (1900-1989), a gifted storyteller and the last lead singer of the Upper Inlet Dena’ina.

Birch bark was a versatile material the Dena’ina used for a variety of purposes. The Dena’ina highly valued birch bark since it is flexible, waterproof and does not rot easily. Some of its uses included roofing material, a variety of containers and coverings for canoes. Also, birch bark is one of the best fire starters found in nature, as it will burn easily even if it is completely wet.