Created and produced by Alexis Anoruk Sallee, Jenny Irene Miller and Native Movement, Dear Kin is a storytelling project highlighting individuals from the Alaska Native Two-Spirit and LGBTQI+ community through video and portraiture.

Each person featured in Dear Kin shares personal experiences in a short video format, reflecting on who and what has informed them, and from where they draw strength. Dear Kin is a letter to past, present, and future Indigenous queer relatives.

Join Native Movement, the creators of Dear Kin, and several individuals featured in the project for its Alaska premiere, including a panel discussion and Q&A.

Dear Kin is made possible by Native Movement. Native Movement is a non-profit organization formed in 2003 out of Alaska, with a vision of grassroots-led movements and healthy Indigenous nations building strong, healing, and sustainable communities for all and Mother Earth. Their work focuses on ensuring Indigenous Peoples’ rights, the rights of Mother Earth, dismantling patriarchy, and ultimately shaping healthy and sustainable communities for all. Created and produced by Alexis Anoruk Sallee, Jenny Irene Miller and Native Movement.

Alexis "Alex" Anoruk Sallee grew up in Anchorage, Alaska of Iñupiaq and Mexican descent. Her love of filmmaking found its start in sound. After years in audio post-production working on feature films and television shows, her move to directing and producing was after feeling the need to see Alaska Native representation in film, where Indigenous filmmakers make up less than 1% of the industry. She served as co-director and producer of the 2018 documentary Definition of Resilience, highlighting the dynamic stories of Indigenous hip-hop MCs. Sallee’s work is focused on breaking down misconceptions and stereotypes of Indigenous peoples.

Charlene Aqpik Apok, PhD, is Iñupiaq. Her family is from White Mountain and Golovin, Alaska. She is mother to Evan Lukluan. Charlene has served in many spaces as an advocate for Indigenous womxn, Indigenous sovereignty, climate justice and Indigenous rights to health and wellbeing.  Charlene gratefully resides in Anchorage on the territories of the Dena'ina peoples. She has taught the Iñupiaq language and is part of Kingikmuit dance group with her son.

Bernice Oyagak lives in Anchorage, after moved from Utqiagvik two years ago. Oyagak and her wife were the second same-sex couple to legally wed in Alaska in 2014. Oyagak enjoys fishing and subsistence hunting and hunts whales, walrus, seals, ducks, geese, and caribou.

Jenny Irene Miller is Inupiaq, originally from Nome, Alaska. Jenny employs photography, video, and sound in her art practice. She has also been exploring the mediums of sculpture and textiles. Her practice is grounded in storytelling and her identity, from Indigeneity to queerness, as well as familial and community relations.

Quinn Christopherson is an Ahtna Athabaskan and Iñupiaq songwriter who is born, raised and based in Anchorage, Alaska.

Will Kusiq Bean is an Indigiqueer activist and Anchorage Community Organizer, born in Utqiagvik and raised in Anchorage, Alaska.

Golga Oscar, a Two-Spirit Yup’ik artist, was born and raised in Kasigluk, Alaska. As a Two-Spirit and a fluent Yup'ik speaker, Oscar is dedicated to keeping his culture and traditions alive and relevant by teaching future generations about taking a role in both gender, language, and art. A strong cultural identity is evident in his work. Through his knowledge of traditional art forms and sewing skills, he creates cultural attire that becomes a strong visual element in his photographic imagery. 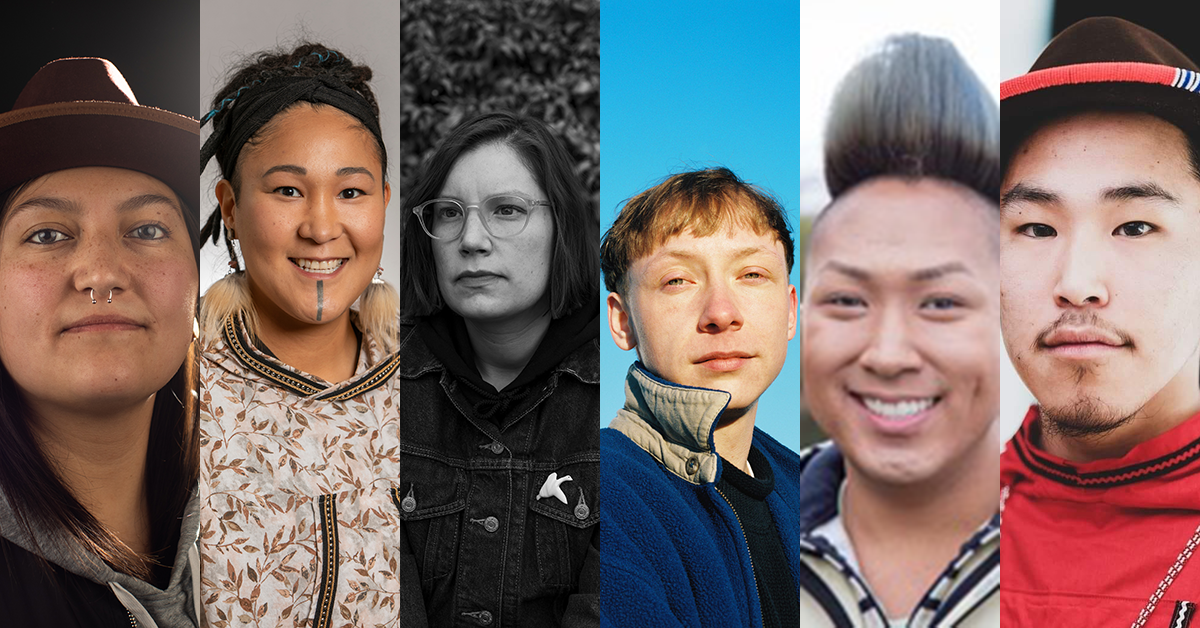