Talk & Book Signing: Can a Reindeer be Communist: Ideas, Ecology and the Nature of History with Bathsheba Demuth

Environmental historian, professor and author Bathsheba Demuth discusses US and Russia economic and social systems by examining their relationship with Arctic space, species and peoples. She highlights the attempts by Russia and the U.S. governments to make the Bering Strait land and Indigenous peoples part of a modern productive culture by farming domestic reindeer. Capitalist and communist ways of organizing animals, people and land got in the way turning the Bering Strait tundra into a comparative experiment. Did it matter if a reindeer was socialist or capitalist? She will sign her book, Floating Coast (available for purchase onsite), after the presentation. Included with museum admission (free for museum members).

Bathsheba Demuth, assistant professor of History & Environment and Society at Brown University, is an environmental historian specializing in the lands and seas of the Russian and North America Arctic. Her interest in northern environments and cultures began when she was 18 and moved to the village of Old Crow in the Yukon. For more than two years, she mushed huskies, hunted caribou, fished for salmon, tracked bears and learned to survive in the taiga and tundra. In the years since, she has visited Arctic communities across Eurasia and North America. From the archive to the dog sled, she is interested in how the histories of people, ideas, places and non-human species intersect. 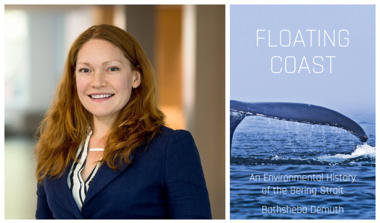