Polar Nights: Friday After Hours at the Anchorage Museum

Open galleries. Open minds. Open late. Launch your weekend at the museum with music, art, films, tours, food and more on Friday nights. Tonight: Take in the opening of the exhibition Snow Flyers, learn more about the museum’s collection, watch a sci-fi film, view the film ATTLA and immerse yourself in the planetarium’s Pink Floyd: The Wall. Muse restaurant and atrium cafe open.

Exhibition Opening: Snow Flyers
6 p.m. West Wing, Third Floor
Fatties, boondockers, freestylers, ditchbangers, freeriding, jibbing, shredding, telemarking. Slang, sub-culture and clever examples of innovative equipment are all part of this exhibition on how we “go” on snow. The objects on view in this exhibition, from snowmachines (motor sleds) and kick sleds to snowboards and fat tire bikes, span decades of climate-inspired creativity. Join us for discussions, films and activities. Included with museum admission (free for museum members).

Docent Gallery Tour
6:15 p.m. Meet at the West Wing stairwell
Take a closer look at the museum’s collections and exhibitions and engage in conversation on a 45-minute guided tour. New focus weekly. Included with museum admission (free for museum members).

3D Acoustics: Live Music with Tubas, Electronic and Euphonium
6 p.m. Friday, Nov. 22 Atrium
Geir Davidsen (Tromsø, Norway) and Christopher Jette (San Francisco, California, US) present an array of euphonium/tuba and electronic works. Blending acoustic and electronic worlds, this 4,800-mile collaboration investigates a shared interest in exploring how the acoustics of performance can blur of the lines between recordings and live performance. 3D printed tuba drivers provide an interface between the computer and live euphonium. A cornerstone of this collaboration is a meditative work of prerecorded tones with live euphonium and a monochord. In addition to their collaborative works, they will each present a solo work investigating time as a sonic tool, exploring range of each instrument. A SEED Lab program.

Film: ATTLA
6:30 p.m. Auditorium
Join us for a screening of ATTLA, a film that tells the gripping but little-known story of the late George Attla, an Alaska Native dog sled racer who, with one good leg and a dream, dominated the sport for five decades. He won 10 Anchorage Fur Rendezvous Championships, eight North American Open championships and nine International Sled Dog Racing Association unlimited class medals. Director Catharine Axley in attendance for a Q & A session after the film. Included with museum admission (free for museum members).

NORDTING/The Northern Assembly
7 p.m. Atrium
NORDTING/The Northern Assembly is a multi-media performance by an artist collective led by Amund Sjølie Sveen with the assistance of Erik Stifjell and Liv Hanne Haugen, all of Norway. This conceptual piece combines lecture, performance and music mixed with a marching band, a powerpoint presentation and some political analysis. The performance investigates and questions the historical narratives of the North. With this performance, Nordting/The Northern Assembly asks questions like: “Are the people of Alaska ready for a United North? What are the most urgent political questions for the North today? Should the US buy Greenland? Who owns the fish? Would Alaska be better off without the lower 48? Will the dream of a United North, Circumpolar Pan-Arctica, become reality? The Nordting/The Northern Assembly has presented more than 48 performances or “assemblies” in the Arctic. Sveen describes the performance as a “nomadic people’s parliament of the North, a party for the periphery, and a separatist movement for an Arctic colony. After visits to Iceland, Finland and Sweden, the time has now come for Anchorage. There will be political analysis, PowerPoint, singing, dancing, voting and vodka.”

Pink Floyd: The Wall
7:30 p.m. Planetarium
Lose yourself in Pink Floyd’s “The Wall.” This full-dome music and light show interprets this classic album through mesmerizing HD graphics. This is not a laser show, but the next generation of computer-generated imagery. Audience advisory: Adult subject matter. $10 per person/$8 members; plus museum admission. (66 minutes) 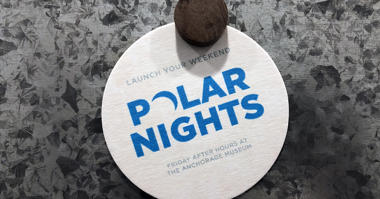