View a selection of feature-length and short films. Included with admission.

Family-Friendly Film: Tia and Piujuq
11:30 a.m. Sunday, May 5 Auditorium
Directed by Lucy Tulugarjuk
Tia, a 10-year-old Syrian refugee living in Montreal, finds a magic portal and travels to
the Arctic where she befriends an Inuk girl with who she immerses herself in a world of
Inuit myth and magic. 80 min, Canada. English/Arabic/French/Inuktitut with English
Subtitles

SGAAWAAY K’UUNA (Edge of the Knife)
1:30 p.m. Sunday, May 5
Directed by Gwaai Edenshaw and Helen Haig-Brown
100 min, Canada. Haida with English subtitles
In a 19th-century summer, two large families gather for their annual fishing retreat on
the far-removed island of Haida Gwaii. Adiits'ii, a charming nobleman, accidentally
causes the death of his best friend Kwa's son and hastens into the wilderness. Adiits'ii is
tormented by what he has done and spirals into insanity, becoming Gaagiixid, a
supernatural being crazed by hunger. He unexpectedly survives the winter, and at next
year's gathering, the families try to convert Gaagiixid back to Adiitst'ii.

Edge of the Knife (Haida: SG̲aawaay Ḵ'uuna) is a 2018 Canadian drama co-directed by
Gwaai Edenshaw and Helen Haig-Brown. It is the first feature film spoken only in
dialects of the Haida language. The film was created primarily by indigenous people,
including the co-directors, a mostly amateur crew, and the Haida cast. In 2017, Edge of
the Knife actors were taught to speak Haida at a two-week training camp and
throughout the five weeks of filming. Edge of the Knife made its public premiere at the
Toronto International Film Festival, which named the film in its annual Canada’s Top
Ten list. This is the first Alaskan screening.

Bjarne vil ikke på film (Bjarne Hates the Camera)
Documentary. Directed by Weronika Nitsch, 2018. 40 min
“Bjarne Hates the Camera” is the story of a foreign filmmaker who invades the life of
her neighbour Bjarne. Who is he? She asks him about life and death, hopes and
dreams. He asks if she ́s going to stop anytime soon. But when the woman behind the
camera refuses to stop, a relationship rarely caught on film is born - full of absurdities,
warmth and humour. And mostly just a bunch of unanswered questions.

Mobil
Narrative short. Directed by Truls Krane Meby, 2018. 9 min.
Walid (17) has fled from Syria to the Arctic Circle. As his family is stuck in the Balkans,
on the border of the EU, Walid has to help them cross it, over the phone, from the
streets of a northern Norwegian fishing village.

Velkommen til oss (Welcome Home)
Narrative short. Directed by Armita Keyani, 2017. 16 min.
Set in the North of Norway, an Iranian refugee couple invite two Jehovah's Witnesses in
when they knock on their door. Welcome Home explores culture clashes,
misunderstandings and the assumptions we make based on background and
appearances.

Bygdehomo (When Pride Came to Town)
Documentary short. Directed by Julie Lunde Lillesæter, Julia Dahr, 2018. 17 min.
The story of Norway's first rural Pride parade. We meet 52-year old Bjørn-Tore, who
fled to the big city in order to escape the everyday homophobia he experienced in his
rural hometown. When the very same village is hosting Norway's first rural Pride
parade, Bjørn-Tore is filled with mixed emotions about returning to take part in the
parade. Tension rise as a local church group organize an anti-LGBTQ rally, just weeks
before Pride. 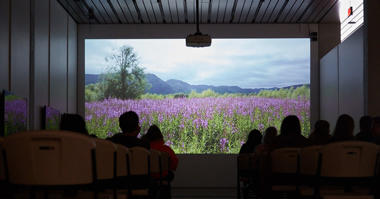