New York-based artist and educator Pablo Helguera finds it remarkable that there is a scarcity of books available in Spanish despite the millions of Spanish speakers in the US. In response, he created Librería Donceles, an itinerant bookstore and meeting space carrying more than 10,000 books in Spanish.

Named for the historic street of used booksellers in Mexico City, Helguera’s Librería premiered in Brooklyn, New York, in 2013. It has since traveled to Phoenix, San Francisco, Seattle, Chicago, Indianapolis and Boston, where, in each city, it has been the sole Spanish-language bookstore.

Although the books within it are Spanish-language specific, Librería Donceles reflects on issues pertinent to all people who speak languages other than English: access, equity and inclusion.

The Museum is interested in the idea of literacy as encompassing not only reading and writing, but also skills that enable meaningful participation in society and in life. Librería Donceles provides a platform for doing just that: a space where teaching and learning can occur, where different narratives about our city can be explored, and where people can connect, relax and enjoy each other’s company. 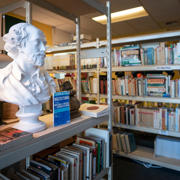 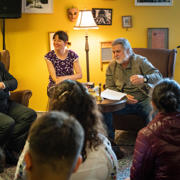 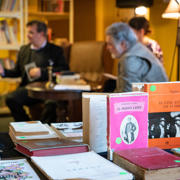