These Alaskans weathered the pandemic together and grew life-changing bonds 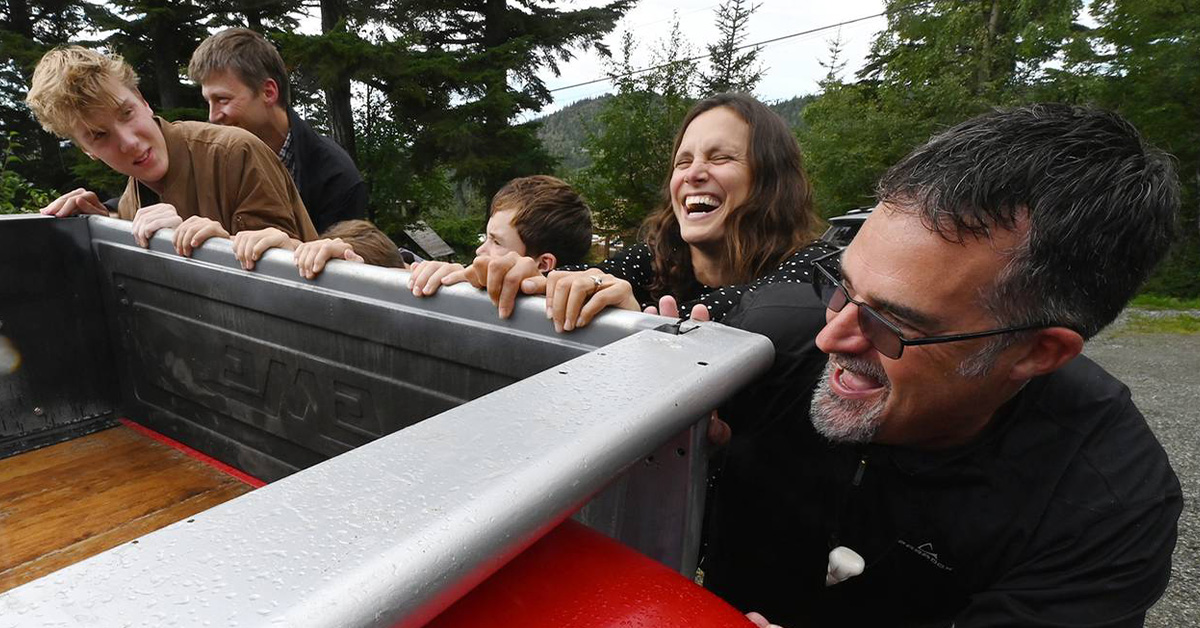 Annette Rearden discovered she had Hodgkin lymphoma in February of 2020. Within a few weeks, pandemic news turned regular life upside-down. Rearden faced a tidal wave of problems and decisions.

Her life was already full and busy. Her son, Atticus, was 9 and her daughter, Saoirse, was 4. She had been teaching in the nursing program at UAA. Very little was known about COVID-19. She learned she faced months of chemotherapy followed by radiation. She would lose her ability to fight infection. Then, schools closed.

That’s when her sister-in-law, Jessica Clarkson, proposed that her family and Annette’s family become a bubble, isolating together. Clarkson offered to take her children every other week while she underwent treatments. Everyone would isolate.

“I was like, you have got to do this and you can’t do this and be a parent while the kids are home and be a teacher,” Clarkson said. “You have to do you and only you right now. This is the only thing that I can do, Annette.”

Plenty has been written about isolation suffered during the pandemic. But on the other side of that, many people built tight “bubbles,” micro-communities with friends and family that helped them minimize COVID-19 exposure. More than two years later, many of those bubbles have blossomed — deepening family bonds and growing into life-changing friendships. People’s stories and recollections about the friends and family who supported them are full of gratitude. 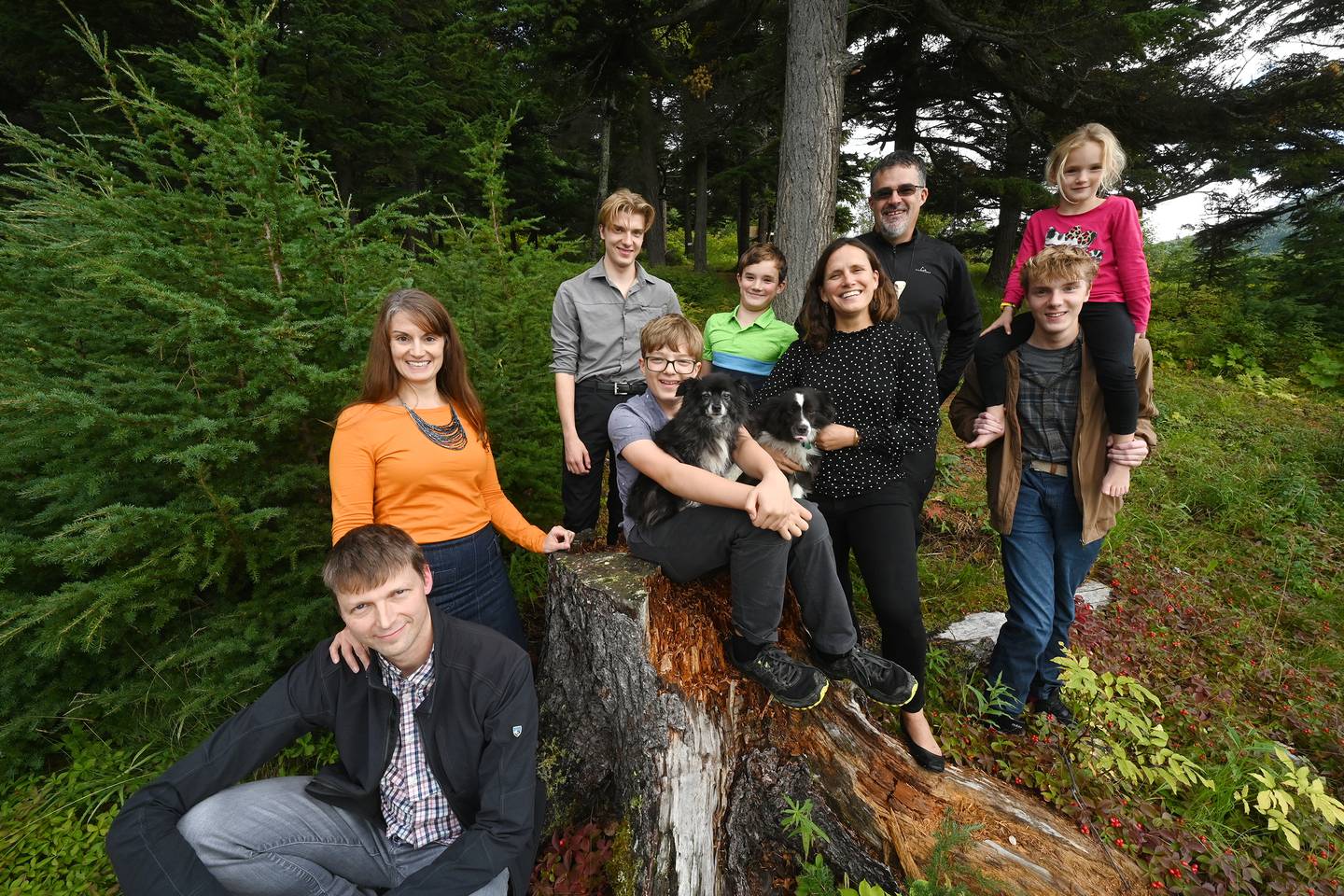 When Clarkson approached her, Rearden remembers she agonized over what all the disruption and being away from her would do to her children. Eventually, she agreed.

“I am used to handling my own business, and also there was just immense fear of the unknown. Having to turn over and say, she’s right, because she was right,” Rearden said. “It was very, very hard.”

In the very beginning, Clarkson was alone with her own three children — a set of twins in eighth grade and a third-grader — along with Rearden’s kids. Her husband, Uriah, a pharmacist, rented an apartment because it was unclear whether his work with the public would make him too much of a risk.

“For the first six or eight weeks all I was doing was delivering groceries and talking on the phone,” he said.

Jessica spread the home-based school throughout the week, taking Sundays and Wednesdays off. She spread her workload over the week as well, getting up early to sneak in extra hours. The kids picked what they’d like to eat for dinner. The twins helped with the younger cousins.

“There was more food at the table. I just lumped them in,” she said. “It’s just what you do.”

That went on for four months. Next, Rearden went to Seattle for radiation. Her kids went to stay with a second set of in-laws in Montana. When the kids look back on that time, Rearden said, somehow they remember it as fun.

“In the end, it turned out amazing because my kids were thriving in a pandemic environment where other kids were struggling,” she said. “That relationship with family was intense and strengthened. You know, our children became their children.”

And, the family support helped Rearden reclaim her health. She celebrated her second year of remission last month with a sushi party with her neighbors. 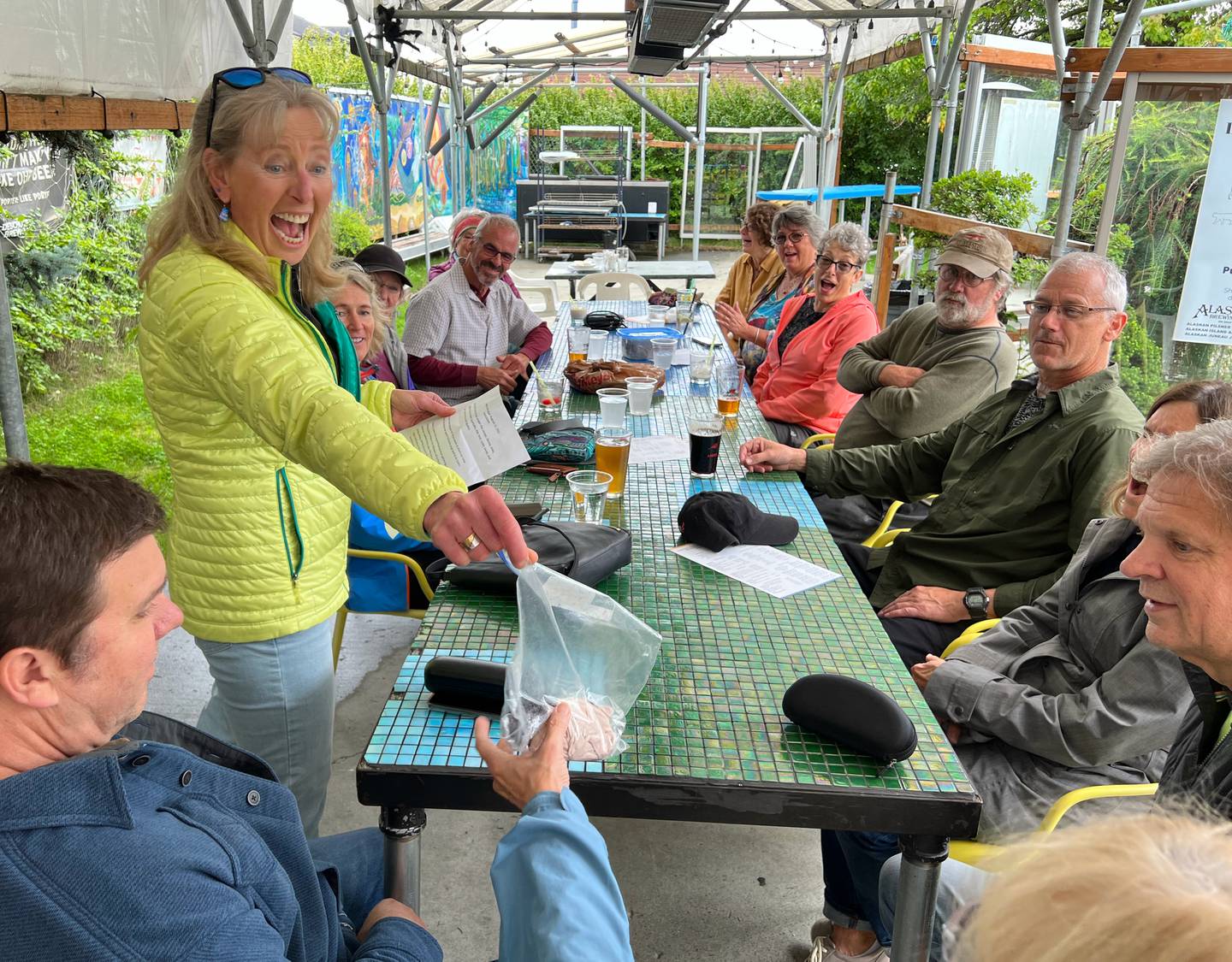 Linda Lozanoff hands back a baggie with something she borrowed as she gives an invocation as the bubble she is part of meets at Bernie's Bungalow in downtown Anchorage on Saturday, August 13, 2022. She laughed and said they are washed. (Bob Hallinen Photo)

The “gym friends,” as they call themselves, came from all walks of life — among them a corrections worker, a special education teacher, a software analyst and a warehouse manager — brought together years ago by weekly Zumba and Pilates.

Occasionally they gathered after class for a drink. They organized hikes and invited other gym friends to join. When the pandemic rolled around, they were a core group of four or five of them along with 15 or so others. With a few exceptions, many were mostly all approaching retirement age.

In spring of 2020, just after the lockdowns started, they met for a walk at Finger Lake in Wasilla. Linda Lozanoff, a retired special education teacher from Palmer, brought some lambic beer to share.

“We were going to make a toast to our friendship, the people here and the people who aren’t here, to the future,” she said. “We were all so paranoid about catching COVID, we were like, ‘How are we gonna pour? Are we gonna touch glasses?’ It was such a hoot.”

On that walk, they decided to make a bubble that would keep up their regular meetings, albeit outside. Isolation and a lack of activities was no good for people their age. They joked they should start a band and call it “Amigos de Gimnasio.”

They kept up bike rides and hikes. They gathered for concerts at Palmer Alehouse and held a drag bingo in a backyard. Their politics weren’t all the same, but they made a point of not letting it get in the way of their friendships.

“It’s hard to get old in a lot of ways,” said Diana McKenney Bailey, 63. “But one of the great things about it is that, you know, like we were talking about our ability to have discussions and our ability to lose a lot of the judgment ... kind of looking at things and saying, you know, this is just not going to bother me anymore.”

There were, of course, lots of pandemic ups and downs. But the gym friends never felt alone. Lozanoff started hand-writing quotes like “Kind words are short and easy to speak, but their echoes are truly endless” or “Life itself is a challenge, rise to it,” and then taking a photo of them and sending it out to the group. Her list has now grown to more than 20.

“If she missed a day, somebody would text her, ‘Is everything OK, where’s my inspiration?’ said Denise Summers, 63. “We’ve kind of come to expect it now.”

Lozanoff said having the community has helped them all get accustomed to the roller coaster of pandemic life. She knows people who let negativity get to them, but not the gym friends.

“They mean several things to me. They mean acceptance and honesty. Nobody’s judgmental. They just like to have fun,” she said.

Roxanne Chan noticed Corrie Whitmore and Erik Carlson when both their children were in the same child care program. Like her and her husband, Michael Aanavi, they were older parents. Her son Zev, who was a toddler at the time, seemed to show a special fondness for their son, Craig. They had a few successful play dates. Most of their friends did not have children and Chan was eager to meet some parents.

But then the pandemic came and upended everything.

Chan and Aanavi, both acupuncturists, spent nearly a year mostly isolated, piecing together child care. It worried them that Zev, who is an only child, wasn’t able to socialize with other kids. They tried a few FaceTime calls with Zev and Craig. Zev brightened with each.

“He made a little leap where he was doing things that he wasn’t before,” Chan said. 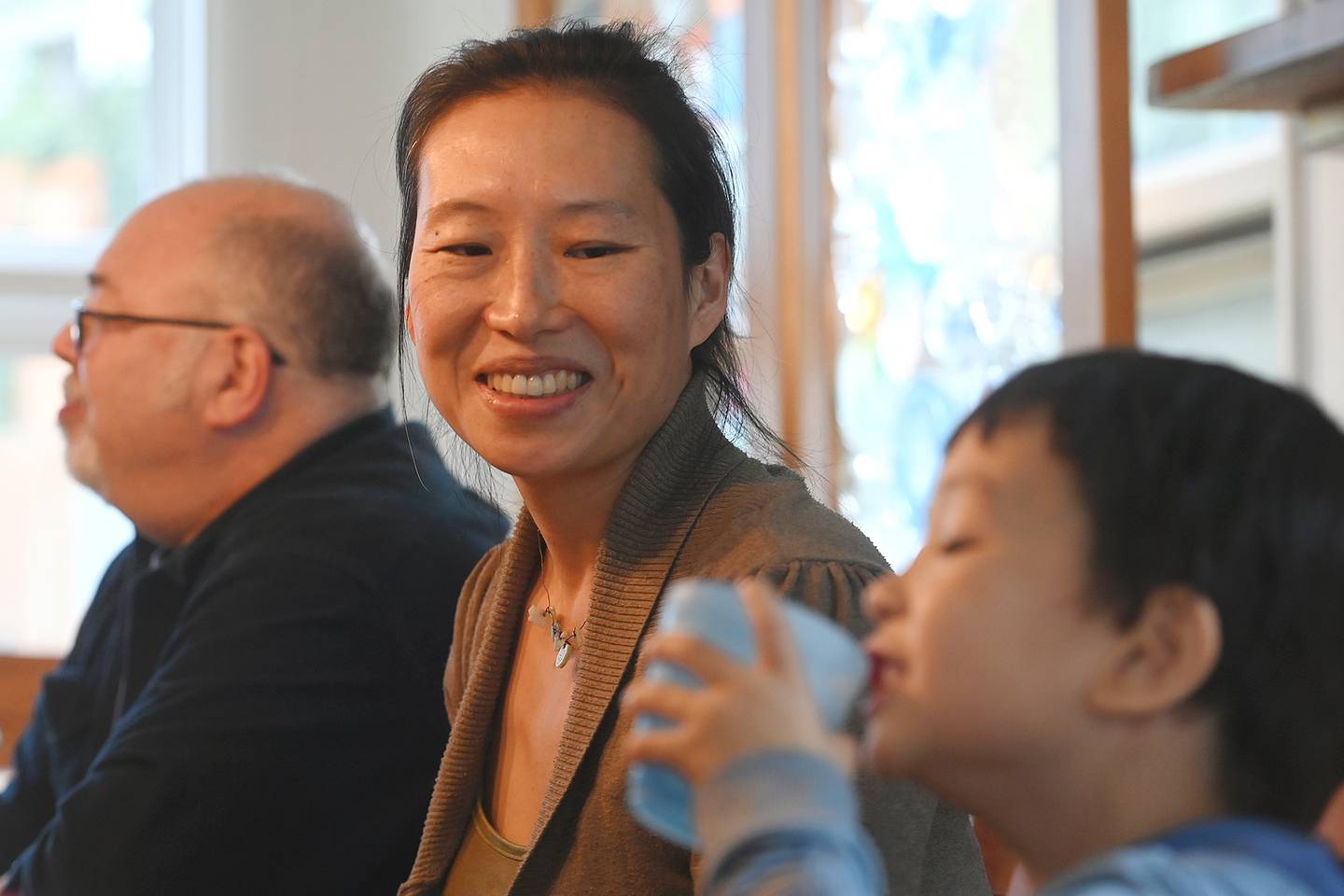 In February of 2021, Whitmore invited them to share child care at her home as part of a pod school with a preschool teacher. The families all had children too young to be vaccinated and continued to be careful about virus exposure. When they told Zev, who was then 3, his whole body relaxed.

“He was like, ‘I can go there every day and not have to wear a mask? Be with my friend Craig? Yes!’ ” Chan said. “It was just such a big relief. He really felt it.”

Looking back, Chan realizes Zev’s feeling of wanting to connect with a friend was something she and Aanavi were experiencing as well.

“I think that’s the first time I realized, like, outward signs of loneliness,” Chan said. “You know, like really acknowledging: This is loneliness.”

Every day, when she picked up Zev, Chan made an effort to talk with Whitmore a bit. Trying to make a new friend in midlife, after a year of isolation, felt awkward.

“I even talked with my counselor, like, how do I do this?” Chan said.

What she didn’t know was that Whitmore and Carlson were feeling the loneliness too. Losing the community of their child care program had been unexpectedly isolating.

“We suddenly went from being part of that community, where we weren’t especially close to anyone but our kids were together every day and we all saw each other, to it just disappearing in a heartbeat.” 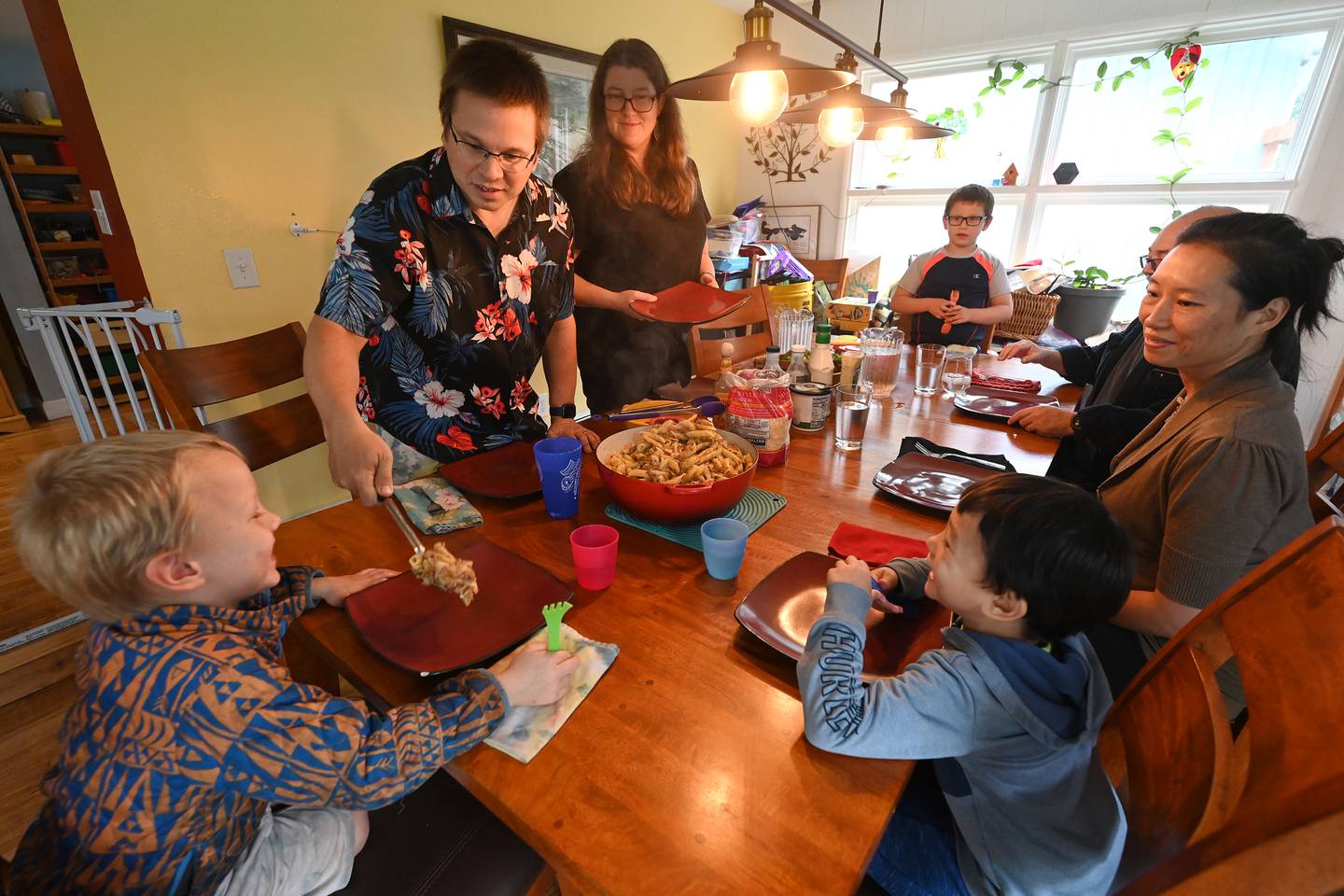 Erik Carlson and wife Corrie Whitmore, center, have dinner in their College Gate home on Wednesday, Aug. 24, 2022. Their family and another family Michael Aanavi and Roxanne Chan, right, formed a bubble to share childcare during the pandemic. (Bill Roth / ADN)

The couples started meeting for dinner and playdates. And then, last September, Carlson asked Aanavi to go hunting. Whitmore said one thing she learned about friendships, when everybody is busy with work and kids, is that it helps to have regular plans to see each other. Chan and Aanavi realized that it would be easier for the boys and the couples to be friends if they lived on the same side of town. And so they started looking for a new house. This summer they found a place on the same street in College Gate. They’re in the process of moving in.

The pandemic years made the value of close friends very clear, Whitmore and Chan said.

“I’ve been waiting for this sort of relationship to finally happen because of COVID,” Chan said. “You know, it really means the world to us.”

Their kids will attend the neighborhood elementary school. It’s their plan for their children to grow up together.

“I love that we have this space somewhere between friends and family — for me, friends that I can co-parent with a little bit, friends who I can catch up with their kids and they can walk my dog and we sort of create that middle space together,” Whitmore said.

Already, Chan said, Whitmore seems to have magical timing. Every time they are at their new house lately, she notices the cars and drops by to ask if Zev can play.