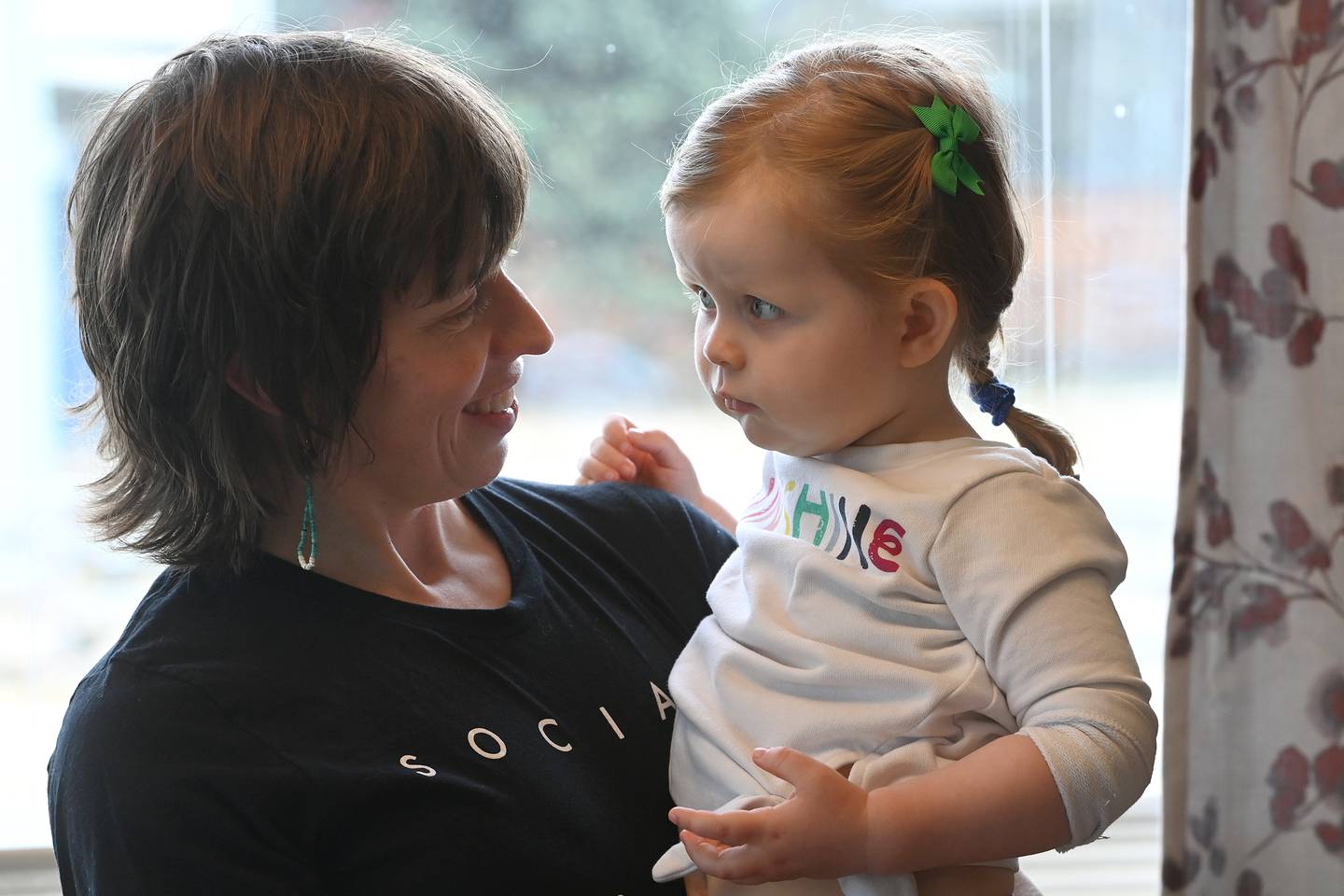 It was five days before Anchorage shut down in March 2020, in a room at Providence Alaska Medical Center, when Tiffany Hall says she first understood what it meant to be a mother.

She was in labor, having a baby as a single person. Pain filled her with dread. Exhaustion scrambled her thoughts. Friends had tickets to fly to Anchorage to help out, but COVID grounded them and made the world feel upside-down and scary. Hall was allowed only two people in the room aside from hospital staff: a doula, and her sister Lisa. She told Lisa she couldn’t keep going.

“I know,” her sister said. Then Hall looked around the room at the nurses and the doula. All of them had been through this before.

Hall got a burst of motivation. The pandemic had filled everything with uncertainty, but baby Margaret made her entrance anyway.

Parts of motherhood are a sojourn, especially in the beginning, with pregnancy, birth, certain middle-of–the-night scenes only a mother knows, like when she’s beyond tired, nursing in the dark. You can’t anticipate the grit that’s required until you find yourself in the middle of it with no choice. Some women who gave birth to pandemic babies in Anchorage hospitals say their transitions to motherhood were quieter, harder, more anxious and lonelier. They also say dealing with all that uncertainty clarified priorities, strengthened bonds with family and showed them they were more capable than they imagined.

“These women, they had to dig deep and continue to have to dig deep to get through something that is hard,” said Natalie Ward, an obstetrician at Anchorage Women’s Clinic. “You know courage is not the absence of fear, right? It’s being scared to death and doing it anyway. The pandemic has made us do that in multiple areas, but particularly in becoming mothers.”

Ward said the biggest change the pandemic brought was isolation, especially during birth. The policy of limiting people who attended births reduced risk, but the isolation that came with that created other hardships. Lack of child care has also been a problem.

“People who had toddlers at home, and especially ones who were here that don’t have family in the area, it’s been a huge struggle for them to figure out what to do with their little kids when it’s time to have a baby,” she said. “So we’ve had moms come in where the dad actually didn’t come for the birth but stayed home to take care of the other children. They may have come in to deliver alone, which is not that usual.”

Alaska’s seven-day new case rate per 100,000 is still high, but it fell from fifth highest in the nation to 10th highest over the last week. All three hospitals in Anchorage continue to limit the number of birth attendants to two, according to their websites. Earlier in the pandemic, when cases were surging, hospitals limited that number to one.

Before scientists understood the disease well, even Ward isolated herself, separate from her husband and four children. Decisions about vaccination and worry over getting sick stressed her patients in new ways. She found that women were more often coming to appointments alone. They were also more often alone in tragic situations, like when a baby didn’t have a heartbeat on a scan. She called the pandemic a magnifying glass for all of the things that come with the transition to motherhood. It made the hard parts harder and also, when women came through, it heightened the joy.

“This whole living through a pandemic has really sharpened our focus on so many things,” she said.

Elana Habib had been a really social person ahead of the pandemic. She met her partner five months in and got pregnant unexpectedly, something they both welcomed. All of that made her turn inward, she said, which was rewarding and needed. The pregnancy and the pandemic connected and refocused them, she said. They both wanted a family.

“Honestly, my experience with being pregnant during COVID was amazing because I didn’t have to be around people who judged me. I mean, I don’t know if you’ve been pregnant, but it is insane,” she said.

It was also lonely. She missed spending Christmas with family. Her partner and her dad came to her birth, with a doula rotating in because of the two-person limit.

“My mom was also in town, but we had to end up in the hospital for five days due to a C section,” she said. “I think that was hard on the family because, you know, we didn’t know when I was actually going to have a baby and so my mom was basically in town for quite a while without seeing any of us.”

Katie Cueva gave birth in August of 2021. She missed the community and ceremony of having an in-person baby shower, she said. But, she liked working remotely on Zoom because she could choose whether to tell co-workers about her pregnancy. Working remotely also made things easier postpartum. Cueva gave birth in the hospital with only a doula and hospital staff. The sense of accomplishment afterward was incredible.

“The nurse was amazing. My midwives were amazing. My body, it turns out, is also amazing,” she said.

COVID complicated the time directly after birth for many women as well. Doctor and lactation consultant visits often happened over Zoom.

“My lactation consultant was on my phone while, like, I have Margaret in one hand, my phone kind of nestled somewhere, my boob in another hand,” Hall said.

Hall’s parents moved in with her for a while after she gave birth. Her own mom helped her hold the phone during that appointment with the lactation consultant. Many of the women said they relied heavily on their parents, in particular their mothers. 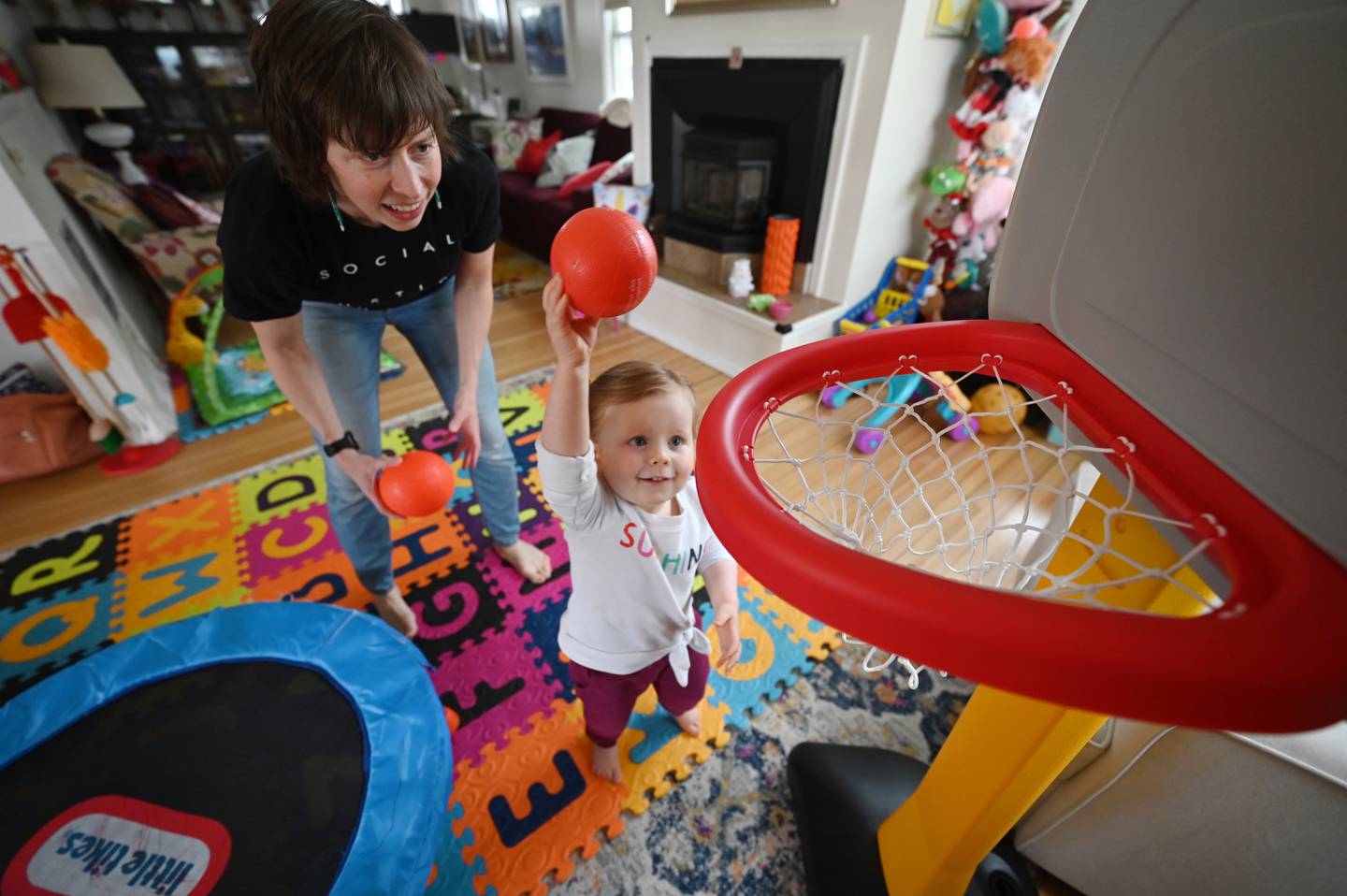 Tiffany Hall and her 2-year-old daughter Margaret play basketball in the living room of their Anchorage home. (Bill Roth / ADN)

Ty Roberts, a longtime doula, said the pandemic put a dent in important support for women before, during and after birth. Many women couldn’t use doulas during their pandemic pregnancy and birth due to the attendant limits. Because they didn’t have that relationship in place, they didn’t use them postpartum. Many also didn’t feel comfortable gathering with other mothers because of virus concerns.

“Moms, they want to go meet the other moms for lunch. You know, they want to do these things and just talk about life and what they’re experiencing, which is a good outlet for their emotional needs, and their mental capacity,” she said.

That’s only now easing back, she said. Doula work in hospitals is also getting easier.

Sarah Wilcox, who had her baby in March 2021, said she missed just being around other mothers parenting their kids. Wilcox spent a lot of time researching conflicting advice online for things like feeding and sleeping and then gave up.

“I was like, ‘OK, never mind. I think I can just figure this out.’ She’s a human. I’m a human. We can connect and figure out what she needs and how I can be her mom,” she said.

Robin Echols had her first child in February of 2020 and soon became pregnant again. Her second pregnancy was complicated, and she was put on bed rest. Doctors urged her to move to the hospital and finish her pregnancy there. She would have been unable to have visitors for weeks.

“I have a son. I have a husband,” she said. “I was like, there’s no way I will survive living in a hospital isolated.”

She gave birth to her daughter, Saoirse, in February. Saoirse was born without kidneys or a bladder. Doctors told her the newborn wouldn’t survive. The hospital can make exceptions to the visitor policy in certain circumstances, like end-of-life visits. It allowed her pastors, Saoirse’s grandparents and her son in to see the tiny girl. After that, doctors told her that they’d need to take her daughter off life support. Echols was grateful she and her husband were alone.

“The doctor said, ‘OK, it’s time. You have to make that decision now.’ I said, ‘I just want to hold her,’ ” she said. “It was the toughest mother decision I’ve had to make.”

The pandemic became irrelevant at that point, she said, but the experience cemented her belief that time with her children is precious. She vowed to make time with her son a priority. 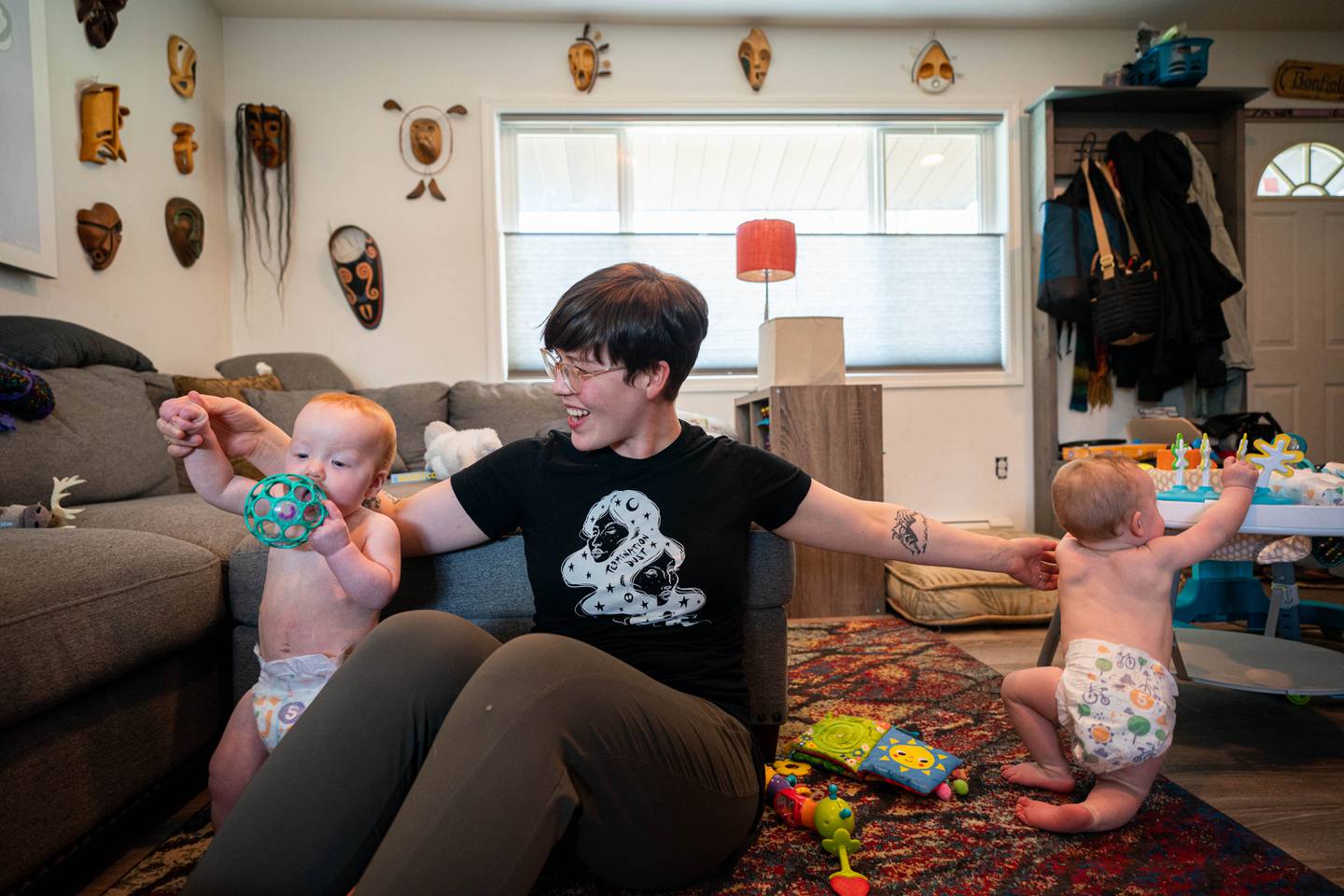 Savanah Bonfield plays with her twin boys Francis, left, and Simon on Friday at their home in Campbell Park. (Loren Holmes / ADN)

Savanah Bonfield was pregnant with twins over the winter and spring of 2020 and 2021. Her husband, Colin, was away in Seward in July 2021 when she started having signs of labor early. She ended up needing an emergency C-section. A friend accompanied her while Colin raced home.

That was hard on both of them, but Savanah also said she was glad to have her friend’s support. What came next was a month-and-a-half stay for the babies in the neonatal intensive care unit, with limited visitors. The Bonfields also have an older son who needed care and had to wait to meet his siblings. They took all kinds of precautions to keep everyone healthy, but Savanah ended up getting infected with COVID-19, as did Colin, and she’s fairly certain the babies did as well. She also lost two relatives to COVID. The whole experience was hard and frustrating beyond measure, she said. She learned to make peace with what she couldn’t control.

“I think that I found a lot of joy and just feeling thankful that the twins were here and well and getting better all the time,” she said. “It was a rough few years. … You know, I think, though, that now I feel like, ‘Life: Try it, try me. I can take it.’ ”

Originally published by Anchorage Daily News on May 8, 2022