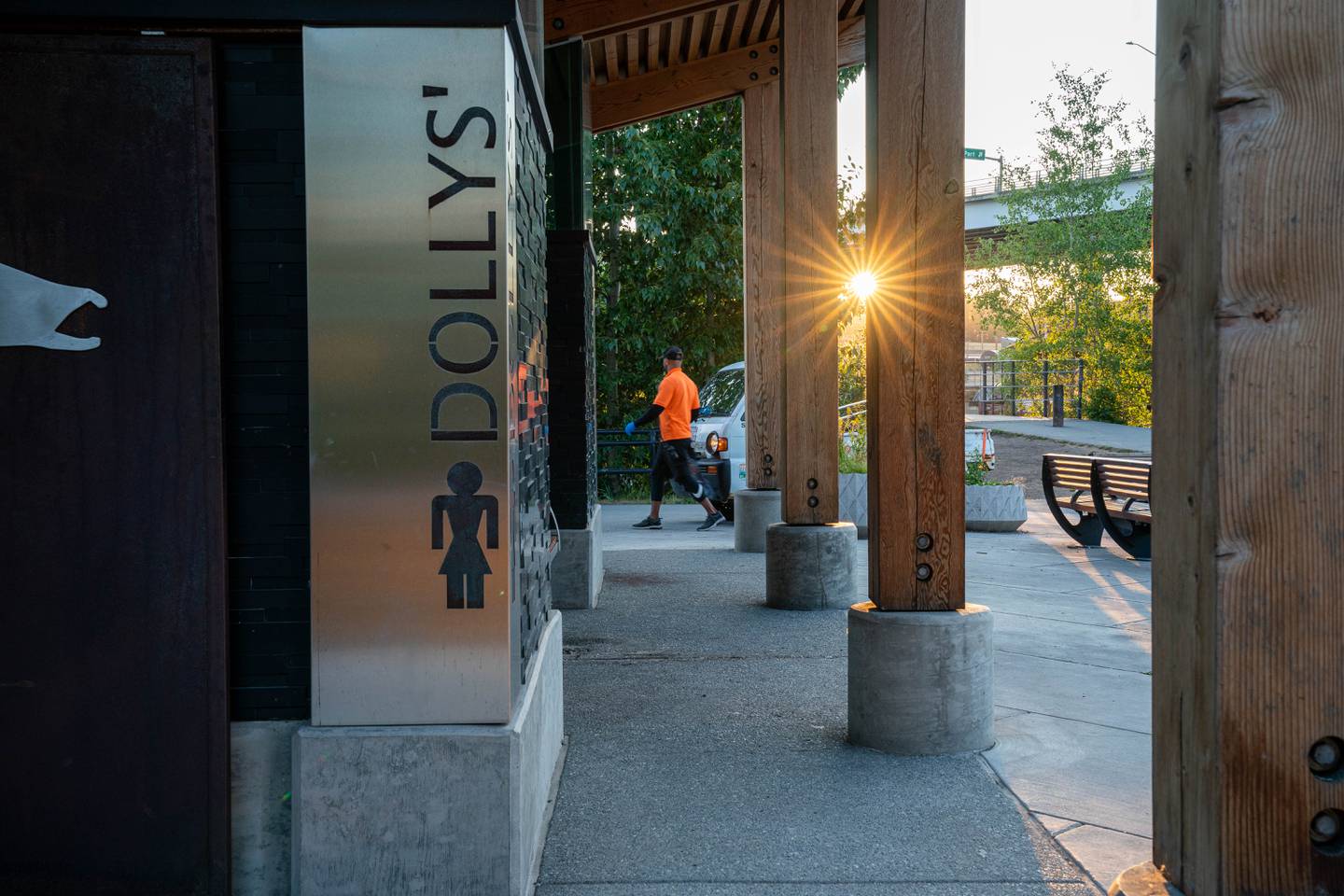 Brendan Haviland and Ray Gilkey, two ambassadors with the Downtown Partnership, set out before 6 a.m. Tuesday to wake the people who sleep on Fourth Avenue.

Maybe 30 people had bedded down along the quiet buildings and under trees in Peratrovich Park. Feet jutted out of doorways and bodies lay under piles of blankets. An older woman sat on the sidewalk outside the 4th Avenue Market Place in her stocking feet. She was soaked with urine. A pair of shoes sat nearby.

“Anchorage Downtown Partnership. Do you think you’re able to get up? Ma’am?” Haviland said gently. “Ma’am?”

“We got tourists coming down,” Gilkey said.

The woman started hollering. Her words melted together. She mentioned health problems, but they couldn’t make out the details. They dialed 311 to get her a ride to the sleep-off center with the hope that safety officers would take her to the hospital if she needed it. Then, they waited. This was their routine.

Downtown Anchorage is the historic heart of the city, a center of commerce, a significant source of property tax revenue and an entry point for tourists. The ambassadors are its guardians, a group of 21 people in neon vests and yellow jackets who take care of the neighborhood on behalf of the businesses. They give directions, remove snow, clean public restrooms, pick up trash and hose away all manner of bodily fluids. Some spend so much time interacting with the unhoused population, the regulars greet them with a fist bump. The jobs start at $16 an hour with benefits. The last few years, their work is increasingly complex.

Even before the pandemic, there were signs of decline downtown, in particular in its retail sector. Nordstrom closed in fall 2019, which was a significant blow. Lots of land sat vacant, awaiting redevelopment. (At present, there is more open land downtown being used as parking lots than in the 1980s, according to the Anchorage Economic Development Corp.) The number of people living in the city’s core, a key part of a healthy downtown, dwindled to about 1,000. Problems associated with homelessness were a constant strain, though the city was poised to open several new shelters and treatment centers. Tourism remained a bright spot.

Then the pandemic hit. The ambassadors walked their daily patrols on mostly empty sidewalks outside of shuttered businesses. As shoppers, tourists and office workers receded, groups of homeless people grew, and incidents of violence, property damage and crime ticked up. Some of the problems became more serious than what the ambassadors had dealt with before. They aren’t officially trained to de-escalate conflicts or intervene in criminal behavior. The Downtown Partnership suspended some of their safety-related duties.

This summer, tourists fill the sidewalks by midday. Restaurants and hotels are busy. Office workers are trickling back. But the city’s plans for sheltering people experiencing homelessness fell apart. Mayor Dave Bronson’s administration closed the large emergency shelter at Sullivan Arena at the end of June and directed some of its residents to a campground in East Anchorage. Others scattered elsewhere. The campground, which appears to be slated for temporary use in this capacity, has been fraught with problems. It’s unclear what happens next.

It didn’t take long for the chaos in the city’s homeless population to ripple into downtown’s fragile recovery. The last few weeks, there have been more homeless individuals on the streets than ambassadors have seen in years, occasionally outnumbering tourists. More new faces show up every day.

“Basically it’s the same people (downtown). You know the violent ones, and the ones that are just mild,” Gilkey said. “The last few weeks, there are different people down here.”

Haviland approached a woman sleeping under a nearby awning, speaking softly. She nodded, stretched and gathered her purse. Most interactions go that way: people wake up and move along. Many are either intoxicated or mentally ill. Lots have health problems and disabilities.

The ambassadors learn to move slowly, announce when they are going to approach and to be patient. When people don’t respond, they make sure they’re alive by gently shaking their shoulders and then they determine whether to call an ambulance or the van for the sleep-off center. Depending on what else is going on, the ambassadors could wait an hour for a transport.

“If we know they are intoxicated and passed out, we just roll them on their side so they don’t vomit,” Haviland said.

Gilkey started working for the partnership after he was laid off from a job as a prep cook at Simon & Seafort’s during the pandemic, he said. A father of four, he grew up in Anchorage and had worked at the restaurant for 20 years. Haviland graduated from Bartlett High School in 2020. He also works at Red Dog Mine. He spent years homeless and couch-surfing when he was growing up so he relates to what people are going through, he said. It’s hard just to take care of regular things, like keeping clean. You worry all the time about somebody hurting you.

“There’s not really a formal way to learn this job,” he said. “You just got to not be a jerk.”

Both the men have been assaulted over the last few years. Haviland had his glasses broken by a man who appeared to be psychotic. Gilkey was punched while doing a wake-up. Their colleagues have faced knives and machetes. A couple have found bodies. One interrupted a suicidal person on the Government Hill bridge.

“It’s kind of a dangerous job,” Gilkey said. “But somebody got to do it.”

The van for the sleep-off center pulled along the curb and two men got out, wearing rubber gloves. They lifted the woman to her feet and walked her to the van. Haviland reminded them to take her shoes. The ambassadors know it’s a revolving door, sending people to sleep off, shelters, the hospital and occasionally jail. Many cities have transitioned away from large emergency shelters and used strategies to stem the costly use of emergency services, instead beefing up treatment and housing options. All of that was part of Anchorage’s pre-pandemic shelter plan discussion.

Rahi Mejia, one of the most senior ambassadors, buzzed up in a tiny work truck filled with garbage bags. He’d been doing the job for five years, beginning shortly after he immigrated from the Dominican Republic. He’s seen lots of people go to shelters, even move into transitional housing, but then end up back on Fourth Avenue.

“You put the guy in there, two, three weeks,” Mejia said. “Then he leaves again.”

It’s hard to get off the streets if people don’t find help for addiction, he said. Once people are homeless, even if they’re not addicted, it’s just hard to climb back out, Gilkey said.

Gilkey and Haviland continued their rounds down the avenue, turning toward the corner of D Street and Fifth Avenue, where a woman dozed in a soiled sleeping bag.

“You need help?” Gilkey asked. She opened her eyes and blinked vacantly. A semi truck roared by. Gotta wake up, said Haviland. Tourists coming, Gilkey said. They’d come around in a few minutes to check on her.

The alley nearby smelled of urine. Feces smeared the sidewalk near a bloody pair of underwear. Eventually ambassadors would get to cleaning all of it. The issue of where homeless people might use a restroom is a major one right now downtown. Ahead of the pandemic, people could go to Brother Francis Shelter or Bean’s Cafe on Third Avenue to eat, rest and use a restroom. The Sullivan Arena shelter also offered those options. With the shelters and the large soup kitchen and day shelter closed, more people appear to be going outside, according to businesses.

Gilkey and Haviland wondered about the practicality of sheltering people who are homeless in a campsite miles away from hospitals and other services.

“I just wish there was someplace around here where people could sleep,” Gilkey said.

They passed Peratrovich Park, where early morning gardeners switched on the sprinklers in the grassy area mostly unoccupied by sleeping people. Bodies under blankets and garbage bags stirred. A drowsy woman ambled by, wrapped in a dusty comforter. The ambassadors tend to leave the people in the city parks alone unless there’s an event or they’re causing a problem.

“Anyone can enjoy the park,” Gilkey shrugged.

It was getting close to 7 a.m. A city water truck inched along, soaking hanging flower baskets. Gilkey and Haviland peeked down D Street, checking for the woman in the sleeping bag. She was gone. A pair of tourists rounded the corner just then, wearing clean, white shoes and likely looking for breakfast. Gilkey and Haviland gave them a nod and raised their palms to say hello.