Alaska’s child care sector is in crisis, but market conditions are great for small entrepreneurs 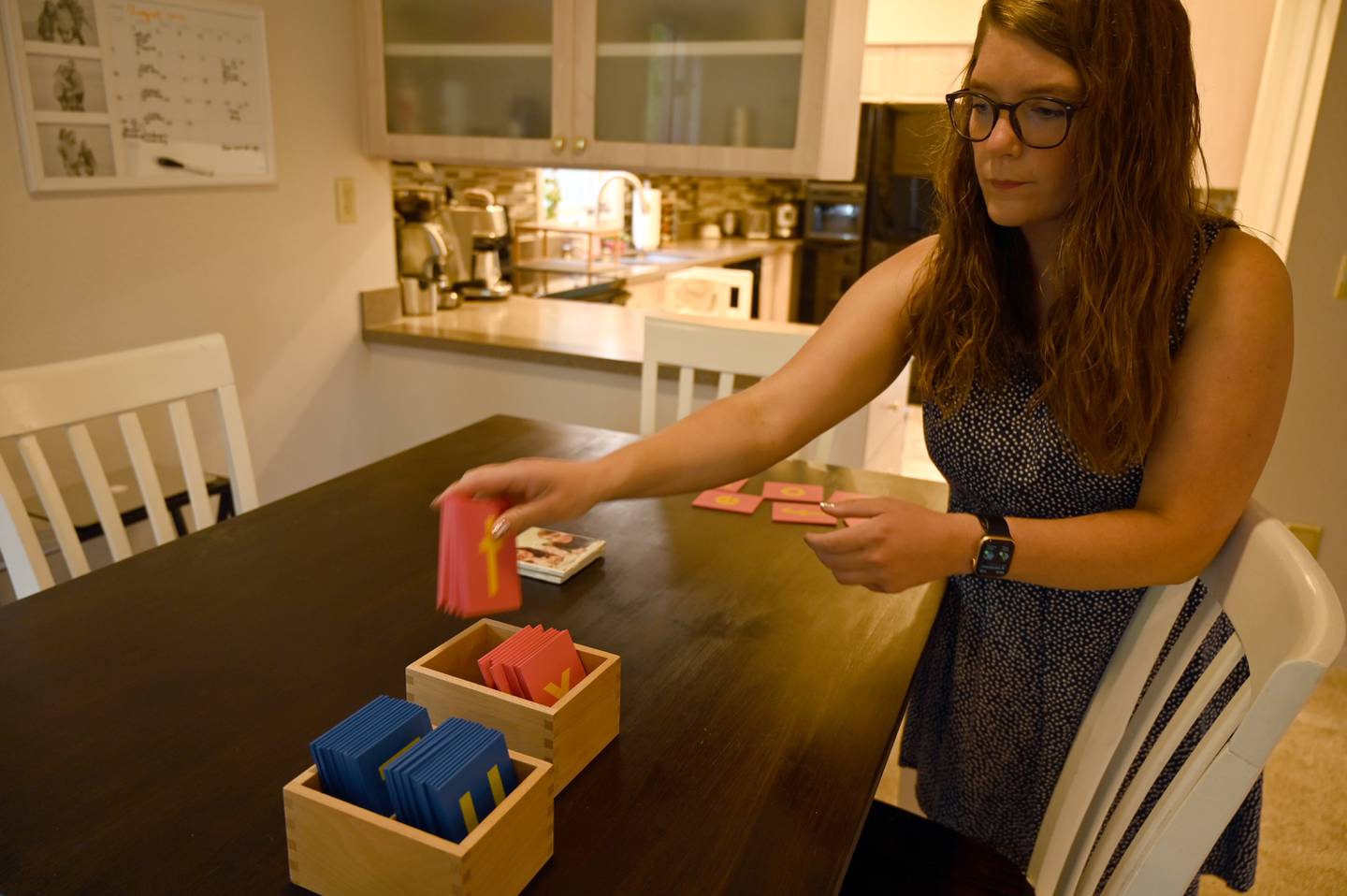 For Koula Zajac Rodosthenous, the decision point came when the child care program she was working for changed so much during the pandemic she couldn’t recognize it.

For Julia Musser, it was when she realized teaching a COVID-19 pod school could be a permanent job.

For Lisa Stratford, it was after a year of feeling she couldn’t meet the needs of kindergartners who’d missed important socialization.

The longtime educators of young children in Anchorage all left their jobs at larger organizations to become independent operators. They were all immediately flooded with interest.

Child care in Alaska is in crisis. It has never been affordable or easy to find, but demand in the state and in Anchorage is at an all-time high. Roughly half the people who need care for young children in the city cannot find it, according to thread Alaska, which tracks child care availability. Because of that, some are choosing to stay home with kids part or all of the time. That’s adding to a persistent labor shortage that costs the economy millions.

“There’s a huge gap between supply and demand in Anchorage and across the whole state right now,” said Stephanie Berglund, CEO of thread. “Every day we’re getting calls from families in tears, super stressed, super frustrated, they cannot find any care.”

It isn’t easy to gauge how many, but high demand has made conditions right for some longtime early childhood workers to quit their jobs and work on their own. This isn’t good news for larger centers losing workers, but some experienced workers say two years of pandemic conditions were grueling and without a change they would have left the sector altogether as many others have. They say self-employment improves pay, keeps overhead low and increases the quality of the care they provide.

It’s not a solution to everything that plagues the troubled and essential sector, but in a part of the economy that’s experienced a rash of closures, it’s a bright spot, Berglund said.

“Everyone runs their business differently, but we have seen that as an economic model, it seems to be less of a market failure,” Berglund said.

The economics of child care operate under a principal Berglund called the “iron triangle.” There are three things that have to be in place for it to work, she said. The centers must have full enrollment, they must be able to charge enough to cover their costs and they must be able to collect all the fees owed to them.

“It’s rare to find a program that is successfully able to do all of those things,” she said.

Right now, many larger centers are hemmed in, enrollment wise, because they can’t find enough staff. While other industries like retail can entice workers by raising wages, child care wages remain low, an average of $12 to $14 an hour. There’s downward pressure on wages to keep the cost of care relatively affordable for parents. Even so, the cost of child care — $1,100 monthly for full-time care in Anchorage — is more than many people can pay. Government subsidies for lower-income and single parents often fall short, Berglund said. And, because of that, centers that take subsidies often have a hard time collecting all the fees.

Independent operators and small child care businesses have an easier time balancing expenses, but they also face their own set of risks and complications. Without employees, there isn’t backup if a provider gets sick. And, as for all small business owners, there’s the issue of retirement, paid sick leave and health insurance. For small businesses, taking on a client on subsidies may also be riskier, because those fees represent a larger portion of their income than a large child care facility.

Loss of productivity from child care issues costs Alaska’s economy an estimated $165 million a year, according to a U.S. Chamber of Commerce report from 2021 on Alaska’s child care shortage. Other states have done things to shore up the child care market in the interest of helping more parents return to work. They have increased the amount of child care subsidies and made more people eligible for them. Some states also have child care workers’ organizations that allow them to buy health insurance. They have also incentivized large businesses to provide on-site or adjacent care. Berglund said it has been very difficult to get Alaska lawmakers interested in child care legislation.

Like many workers, Zajac Rodosthenous, Musser and Stratford started to think critically about their jobs during the pandemic. They wanted better compensation or more control over their working conditions and what they were teaching kids.

Stratford was a kindergarten teacher at Winterberry Charter School. When she returned to in-person teaching last year, she found that her 19 students were not in the same place as incoming students pre-pandemic, she said. They were emotionally fragile and lacked social interaction skills.

“I felt like a lot of what we were doing was not really meeting them where they needed to be met. So I decided to kind of fast-track that dream that I had of starting the home program,” she said.

She’s going through the process to get licensed to serve eight children in a mostly outdoor classroom on her South Anchorage property. Her school will open in September and was mainly advertised by word of mouth. She has two families who have committed, two more that are interested, and a fifth that would enter in the spring.

“I am not completely full but feeling like I’m on my way to being full,” she said.

Health insurance was a big factor for Stratford, whose husband is a commercial fisherman. They decided to purchase insurance in the marketplace. What she gives up in benefits is worth it, if she can set her own guidelines, have a small class size and have honest conversations with families if the program isn’t working for a child, she said. She’ll charge $950 a month for Monday-Thursday preschool, from 9 a.m. to 3 p.m.

“I think I will be able to at least meet what I was making with the district,” she said.

Zajac Rodosthenous left a large program recently after many years. She worked throughout the pandemic and saw the workers around her change, she said. Pre-pandemic, people had been drawn to the job because they were interested in children. But then programs shut down and it was very hard to restaff. New hires didn’t have the same attitude she was used to, and tended to be younger and less experienced.

“They were mostly there for the paycheck,” she said. “And when you work in daycare, you need to love kids. If you don’t, it’s gonna ruin the quality, which leads to an unhealthy environment for children.”

She decided to go out on her own and put a profile online. She has been deluged with interest from people wanting child care more than full time, but has yet to find the right match for the lighter schedule she’d prefer. Leaving the large child care operation means less stability, but she was so unhappy, it’s worth it to make a change. She’s lucky to have health insurance through her husband.

The hardest part for her was watching the way the pandemic impacted the kids, she said.

“The kids, they were struggling a lot and they needed support, mental and emotional support. And that was like the last on the list,” she said.

It took a lot of time to clean, sanitize and keep the children distanced, making it hard for caregivers to focus on other things.

“The priorities changed and many kids, they didn’t want to be there anymore, but they had to,” she said. “It was heartbreaking.”

Musser, who worked at a Montessori child care center for more than six years, left her job early in the pandemic and went to work for three families as part of a small “pod school” designed to limit a group of preschoolers’ virus exposure. Teaching in the smaller environment gave her the idea of setting off on her own.

“It took me a long time to really even believe that I could do this,” she said.

“Julia’s Schoolia” opened in June. Musser has four children and is working on getting the city license to have as many as eight. She’s Alaska Native and so has access to health care through the Indian Health Service. She charges $1,250 a month for full-time care, Monday through Friday. She’s given a lot of thought to why child care wages are low, she said. Part of it is there’s a limit on what parents can pay.

“I just think it can be really challenging on both sides,” she said.” But for child care workers, yeah, I think that it’s just that they’re undervalued.”

The challenge on both sides is especially hard for low-income parents right now, Berglund said.

There is data to show many are choosing to leave a child with a family member or friend, or, in some cases, they are leaving school-aged children home alone, she said.

Parents who can afford care are finding the smaller programs have benefits for kids. Wendy Moe found it was a good fit for her son Leo, 3, who is in Musser’s program.

“Not only does it help with the germs and stuff like that, it’s just the connectedness of all the kids, and the ability for more one-on-one time,” she said.

Beth McLaughlin, whose daughter Ivy, 8, is in the Backyard Adventures program, a small, owner-operated summer day camp that opened during the pandemic, said Ivy also feels more comfortable with something small. Big camps swallowed her up, McLaughlin said.

“They are so invested in what they’re doing,” McLaughlin said. “That’s part of the value of what they offer ... like other programs, where it’s someone working for someone, maybe those people wouldn’t be quite as invested.”