After 2 pandemic years, these Anchorage seniors are reclaiming their community 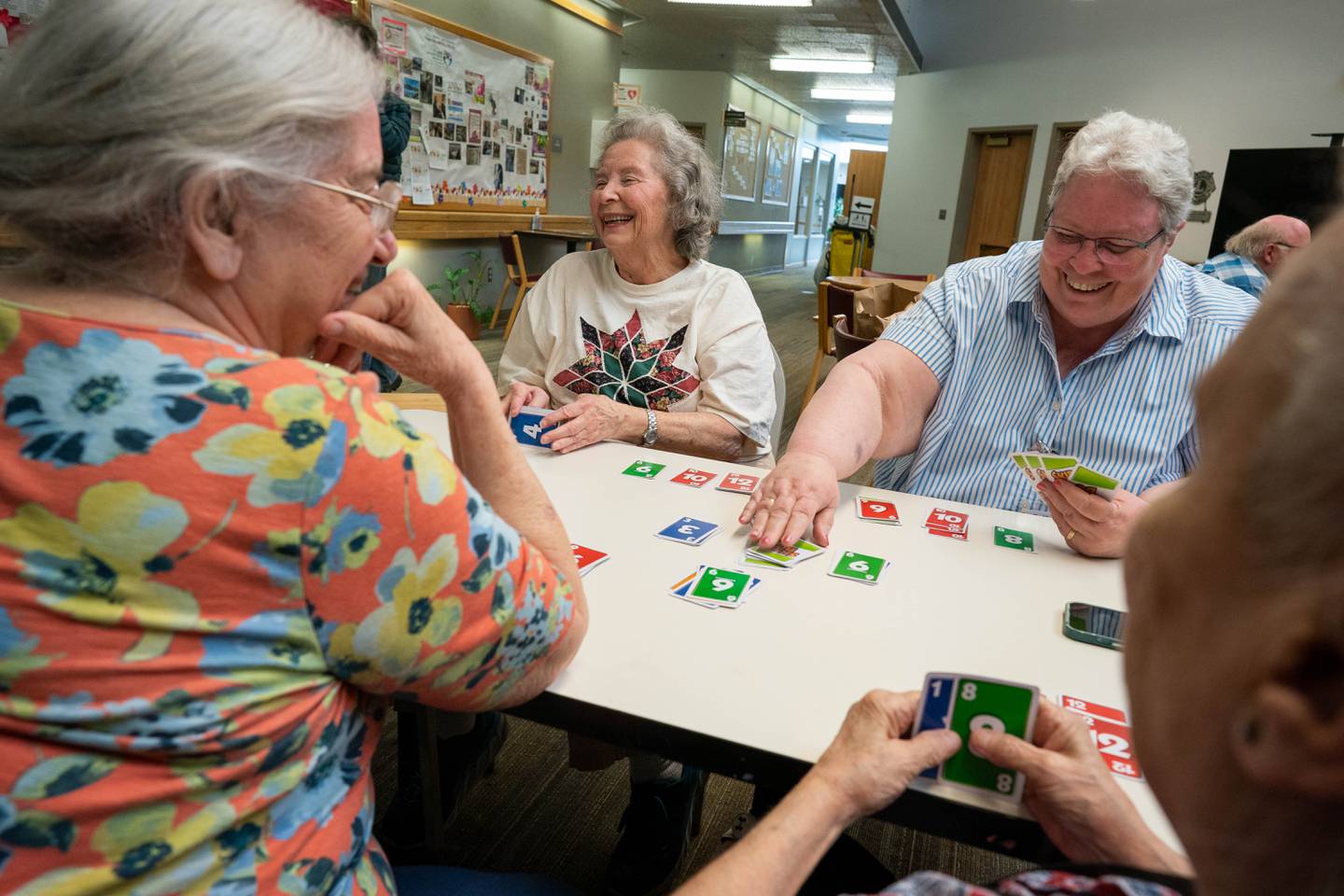 Just after lunch on weekdays at Anchorage Senior Activity Center, a group of women settles into a cluster of tables in the lobby to play Skip-Bo, dominoes and canasta.

There might be 40 of them on a given day. Most of the women are over age 70. A few are over 90. The card game is their pandemic comeback story.

COVID-19 shut down their in-person gatherings at the center, a social hub for 1,700 senior members, in 2020. After vaccines became available, the women campaigned to come back in person, calling daily to check if the center had reopened the tables. In January, the center finally did. The players flooded back, leading the in-person return to the facility. The games are more popular now than ever — an early sign, staff say, of hunger among Anchorage seniors to get together in person, despite the risks.

The card players have lived through a lot: the Great Depression, the polio epidemic, various wars, the civil rights movement, the tech revolution. Most of the COVID deaths in Alaska and the nation occurred among people in their age group, and social isolation hit them hard. The pandemic closed down their churches and sent their book clubs onto Zoom screens with frustrating technical requirements. They missed holding their grandchildren. They lost relatives and friends and couldn’t attend their funerals. Just about all of them worried that the virus would kill them. They’re still at higher risk.

They play cards, they’ll tell you, because that’s how people used to connect and pass time before they were all staring at TVs and smartphones. And if the last two years have taught them anything, it’s that connection is precious.

“They were like, ‘We’ve been stuck in our homes, we’ve lost loved ones, we’re vaccinated, let us get back together because tomorrow isn’t promised,’ ” said Tabitha Karpow, communications and development director at the center. “They were done with what the pandemic had taken from them.”

Interest in senior activities has never been so strong, Karpow said. The center’s membership, which dipped during the pandemic, is back up to 1,750 people. A regular social hour that used to draw 30 to 40 attendees is now drawing 70 to 80.

“It’s especially this last month, a combo of snowbirds coming back and word getting out that we’re open,” she said. 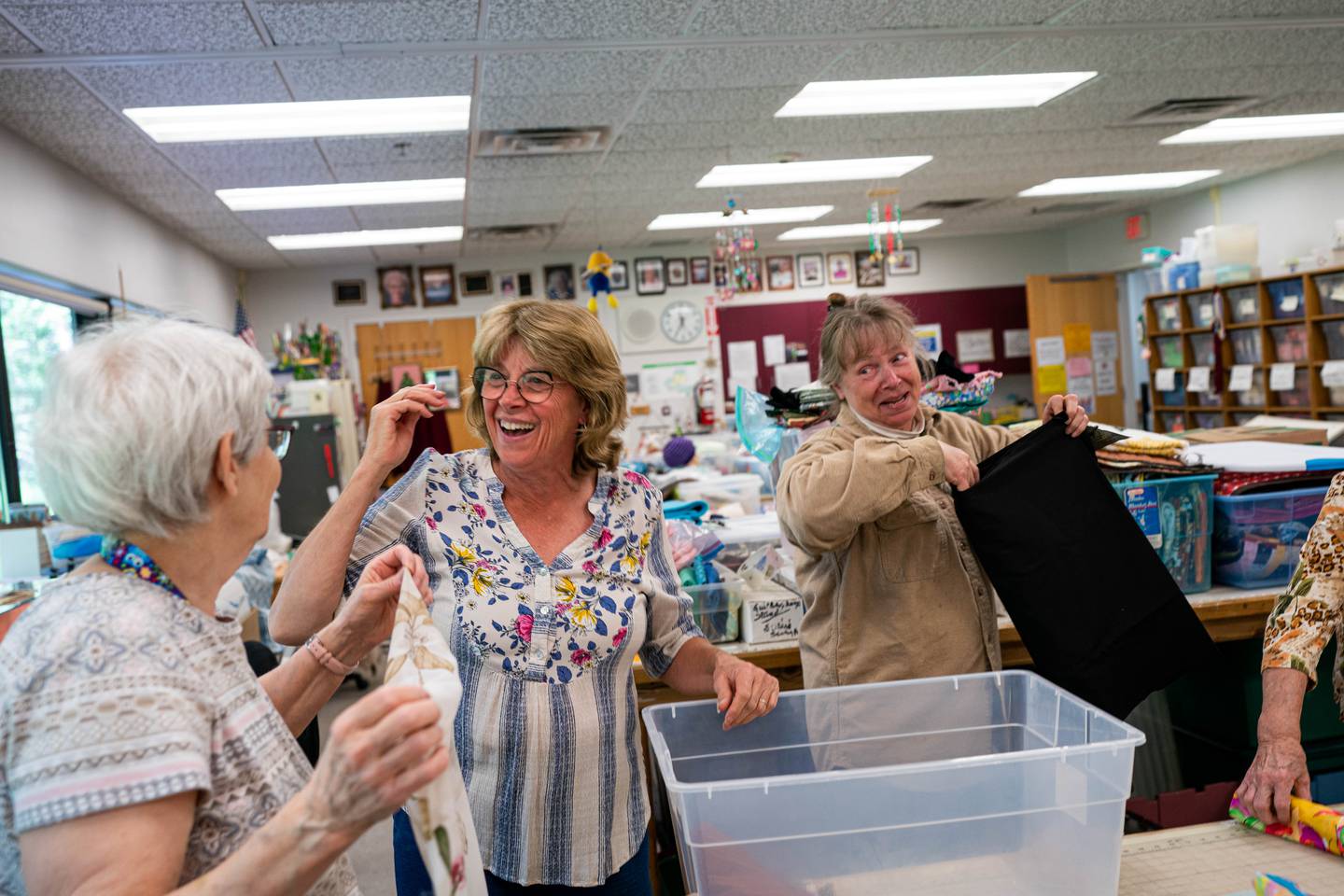 The center has a small staff and relies on volunteers to run many of its programs. It lost those during the pandemic as well, Karpow said, so it’s a challenge to recruit and train helpers to keep pace with demand. At present, the library and restaurant, central features for the center, are open during limited hours. The fitness center needs more volunteers. The master gardener, who oversaw the center’s impressive grounds, recently passed away.

“All of these things are for people who, if they are not here, are often home alone,” Karpow said. 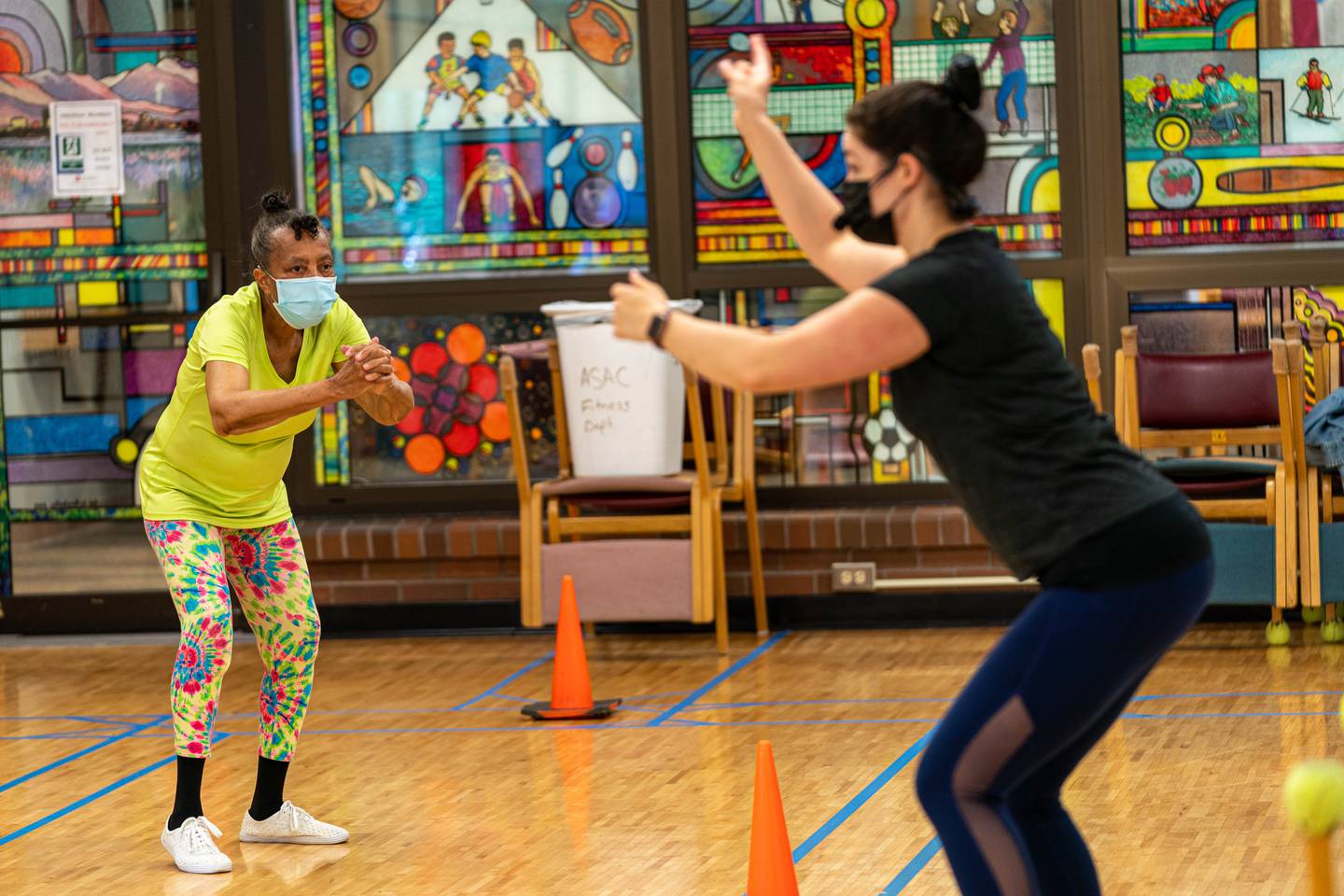 Masks are a touchy subject, Karpow said. Some people won’t return to the gym, for example, until masks aren’t required. Non-mask wearers can book specific times, but that isn’t satisfactory to some. The center follows municipal guidelines in the building, meaning masks are not required, but that makes some people uncomfortable. Many of the programs and classes are offered over Zoom.

“We try to balance that as best we can,” Karpow said.

Donna Delancey, 82, squinted at her Skip-Bo hand on a recent afternoon. She’s been coming to cards since the tables reopened. It isn’t the same crowd as pre-pandemic.

There are so many people who used to come, but don’t now, she said. It could be because they have health problems and masks aren’t required anymore or, maybe, their health took a turn.

The hardest thing about the pandemic for her is not being able to see loved ones who are immunocompromised. She’s always been healthy, she said, and she’s vaccinated. She isn’t married and lives alone, and the isolation has been tough. So is the ever-present risk.

“Two friends have died, they were both out of state. It happens. People don’t want to think that it will,” she said. “I have friends at my church that have lost family members. It’s there and most of the time we’d rather forget it.”

There’s always been an existential undercurrent to the social scene at the senior center, but the last two years intensified it. Executive director Rebecca Parker reads the obituaries to keep track of members who pass away. When she recognizes a name, she always writes a sympathy card, mentioning something specific about the person. She came to Alaska at the beginning of the oil boom, she said. She’s lost so many friends in the last couple years who made a difference in the community. It’s not just COVID that’s harming seniors’ health, she said.

“Some of it I think is that it hurts people’s hearts to be so isolated, to miss their families or to not get to be with their friends.” she said. 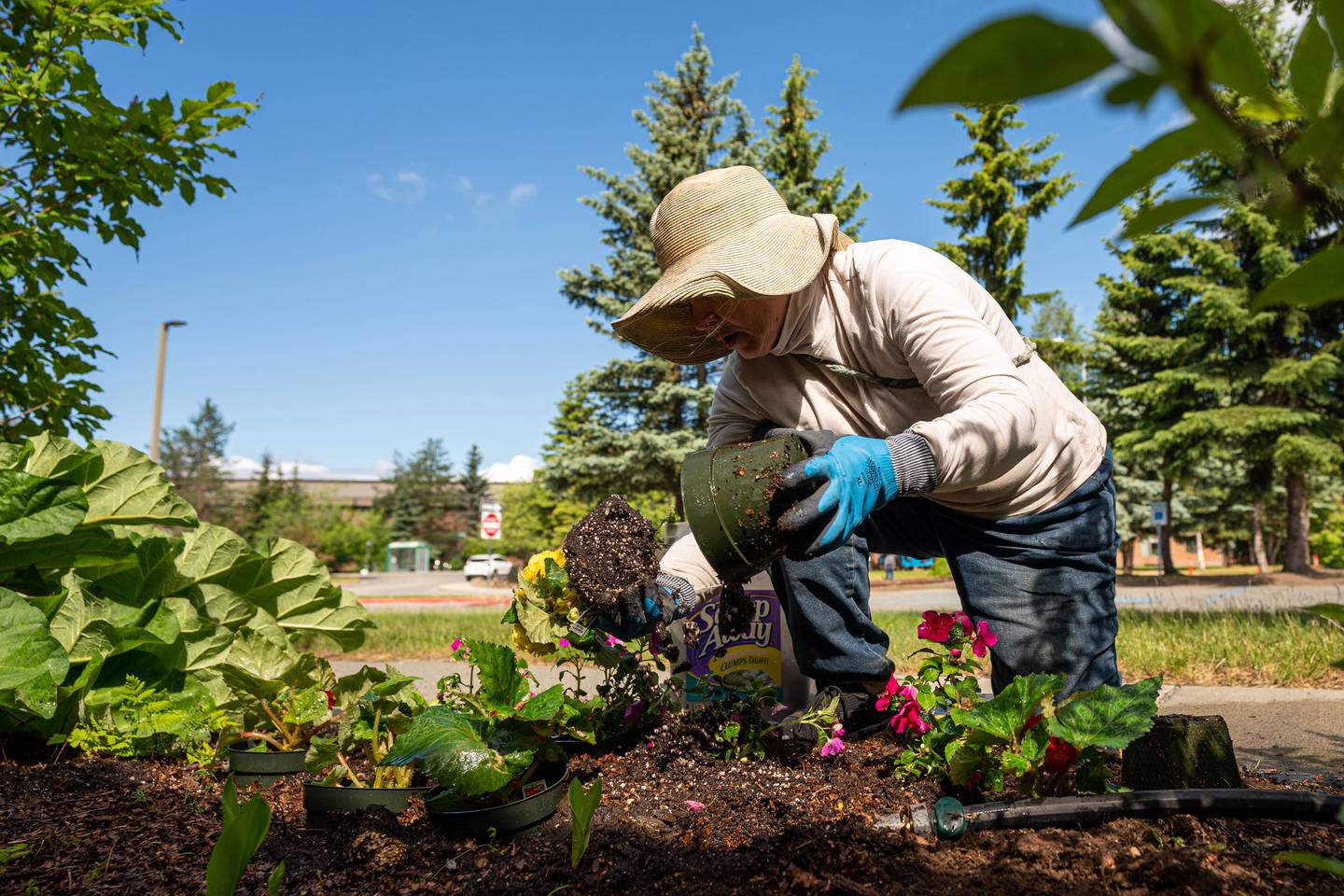 The center will hold a memorial next month for members who have died over the last two years. The center tracks deaths by imperfect means like obituaries and email bounce-backs. Many memorials were postponed because of the pandemic, which has made it harder than usual to get a good count. It’s unclear how the number of deaths compared to regular years or whether COVID increased the number. So far, they have confirmed about 300, Karpow said.

Delancey has been playing cards all spring with Sandra Harp, who is 69. On a recent Tuesday afternoon they waited as another player ran their Skip-Bo cards through a shuffler.

Delancey has lived in Alaska since 1975. She grew up in Indiana, and came up with her ex-husband, who had lived in Alaska when his family was stationed here. She worked an administrative job at GCI for 19 years.

Harp is originally from Arkansas and moved to Alaska with her husband in 2001. When they were buying their house, she grew interested in real estate. She still runs a little company out of her home. She’s raising four of her grandchildren.

Delancey comes to cards to be around people. For Harp, it’s a break from family responsibilities.

Both women are outspoken and their politics couldn’t be further apart. Delancey worries about getting the virus or passing it on to someone more vulnerable. Harp thinks it’s no different than the flu and has her doubts about masks. Both were vaccinated. But Harp wonders if it matters. They sit next to each other several days a week.

Both have given thought to the way the sharpness of the politics around the pandemic stressed people’s relationships. There isn’t a card table that didn’t have someone dealing with division in their family, Delancey said.

“We all have families that are split. I have some that are far right. And I have others that are the opposite,” Delancey said. “So for someone like me, it’s hard. But I have learned I have to keep my mouth shut. Most of the time.”

There’s actually something to that, Harp agreed. It used to be that people didn’t talk about religion or politics. Those were the rules. It tended to shift the focus to other things they might have a shared interest in, she said.

“People got along better and we didn’t have all the anger that’s going on now,” she said.

There are occasionally people who come to play cards who later find out they have COVID, but so far, Harp and Delancey have avoided infections.

The health risk and the discomfort of political conversations aren’t enough to keep Delancey home.

“If you want to stay home and avoid being around anybody who is dumb, then you could do that. But it’s pretty isolating,” she said. “When you’re as old as I am, you don’t have another two decades to look forward to. It’s not going to be there. So if I’m going to do anything, I need to do it now while I’m still able to.”

Karpow said the way the seniors value being around each other is a lesson for everyone.

“They’ve lived their lives, had jobs, families, and they are very comfortable with who they are and what they believe,” she said. “But they see there’s things that unite all of us, it’s OK to have different lifestyles and opinions and still share community, you know?”