Acts of kindness multiply: The story from one Midtown Anchorage drive-thru 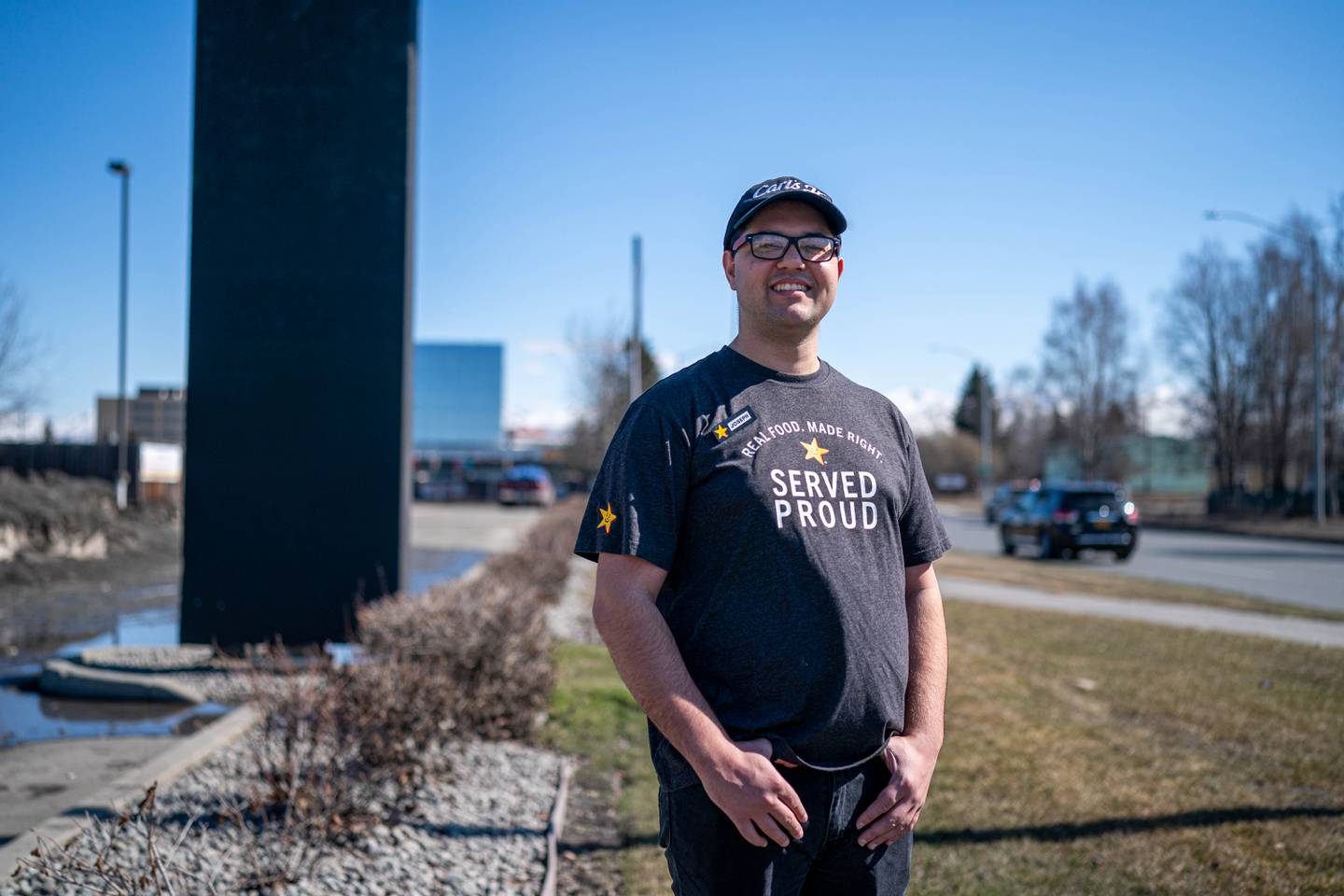 Last month, Jason Robards drove to the Carl’s Jr. drive-thru in Midtown for a burger. He made his order and then rolled up to pay.

“I just poked my hand in the window and gave the guy my card, you know? And he got pretty awkward right away,” he said.

The guy kept looking at him the way you do when you recognize someone but can’t place them. Jason has a tattoo on his hand of a “Bob-omb,” a little bomb with feet that’s a character in the Mario video games. That started a conversation.

The guy told Jason to come back to Carl’s Jr the next evening at 8, when he got off his shift.

For much of the past two years, a lot of us have been isolated from people we know, but also from the world of strangers, from small talk in line for coffee and smiles in the grocery store, and the sense of community that comes with it. That makes acts of kindness more meaningful as we ease back into the rhythms we left behind. Here’s the story of one of them.

Robards, who is 39, had pulled up to the drive-thru carrying heavy thoughts. He’d spent the pandemic at Goose Creek Correctional Center and a halfway house. He’d gotten out six months before, reentering a world totally different from the one he left, and he was still getting used to it.

Addiction led him to prison, but he’d gone through treatment inside. Being clean gave him a feeling of having potential, but reentry is a big shift, even when you’re not in recovery, and there are a thousand ways to mess it up. Coming back to a simplified pandemic life helped. He stuck close to family and reconnected with his kids. He worked odd jobs and sold sneakers online. But some days, maybe even that day, regret haunted him.

“Reentry is a struggle,” he said. “You have to deal with everything that everybody else deals with plus what you’ve done. It’s definitely tough for me.”

By the next day around 8 p.m., Jason had just about forgotten the whole drive-thru thing. He was cleaning his living room.

“I looked at my phone. … It was 8 on the money, right? … And then I remembered, oh my gosh, the guy at the drive-thru. And once I realized, I couldn’t quit thinking about going,” he said.

So he went. When he showed up, the restaurant was empty except for a woman behind the counter.

“And the lady’s like, ‘May I help you?’ and I’m like, ‘I was going through the drive-thru yesterday. This guy told me to come back?’ ” he said.

And pretty soon, the guy from the drive-thru appeared. He had his microphone headpiece on. He held a large black trash bag. Inside: a PlayStation 4 game console. He gave it to Jason and also handed him an envelope. 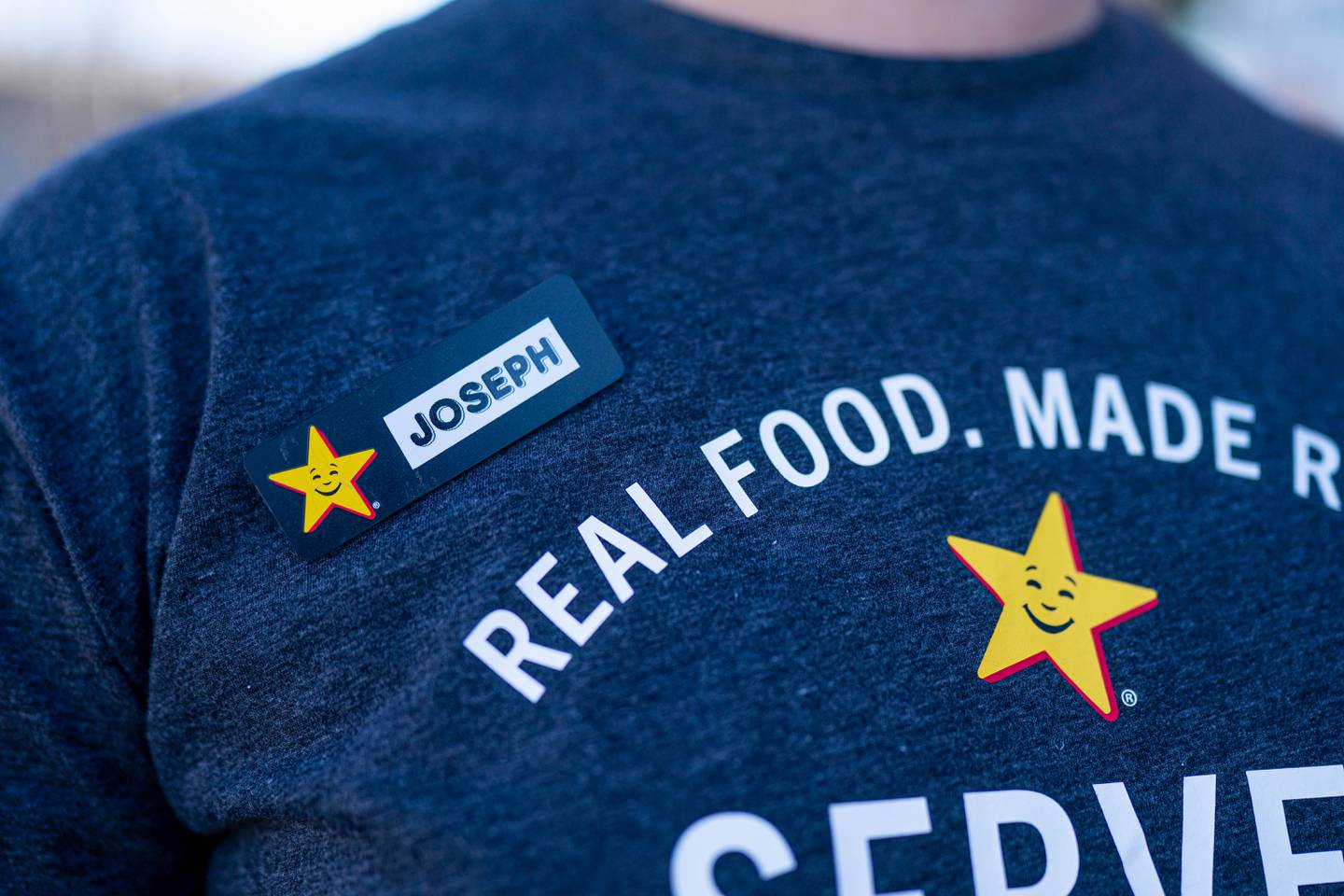 Joseph went back to work. Jason took the bag to the car. He didn’t open the envelope.

Back in the drive-thru, Joseph Rice, who is 22, had been through some heavy stuff of his own over the last couple years. He grew up in East Anchorage and spent most of the pandemic working on cars with his dad’s mechanic business. Most of his friends were online, and when it started getting dark again in November 2021, isolation swallowed him up.

“I was just done. … And one day, which was my birthday, I told God, just kill me, I don’t want to be here, and he didn’t,” Joseph said. “And for some random reason, I just kept on talking to him. For hours.”

And about three weeks later, Joseph said, he was just lying in his room, talking to God, and he felt a warm feeling come over him. He said it was the Holy Spirit. His depression eased on the spot.

“All of it went away immediately,” he said.

And that began a kind of reentry for Joseph. He felt called to be a different person. He started making videos of himself giving sermons and posting them on TikTok. The more he made an effort to connect with the world, the better he felt.

“Right now, people are more hateful, more judgmental. People just would rather treat someone bad to get … any type of advantage than to just go out and just show some kindness,” he said.

Joseph started his job at Carl’s Jr. in January. He says he sees about 170 people a day come through. Working directly with the public lit up Joseph.

“I love talking to people. I try and talk to as many people as I can at the drive-thru as long as I can. Even when I’m told like, ‘Hey, you know, I know you want to talk to people, but, like, get them through,’ ” he said. “I just love talking.”

On occasion, he hands notes of encouragement to people coming by. The thing he’s learned about putting that energy out there, he said, is that it multiplies. He sees it all the time. One person pays for the meal of the person behind them, then the next person passes it on and so on until there’s no one left waiting.

Joseph’s thinking about moving to Springfield, Oregon, and then maybe traveling the country after that and preaching. He had decided to give his video console away instead of selling it, so he was just waiting for someone to give it to. When he crossed paths with Jason and his tattoo, it felt like a sign.

“I thought this will not only help him, it will also make his day. So I thought, you know, if I can do that, then it’s worth it,” he said.

Even though Jason and Joseph were strangers, their interviews echoed each other. They’d both been through something alone that was harder than they could imagine and came back with a new idea about who they wanted to be. You never know, both men said, what a stranger might be going through. 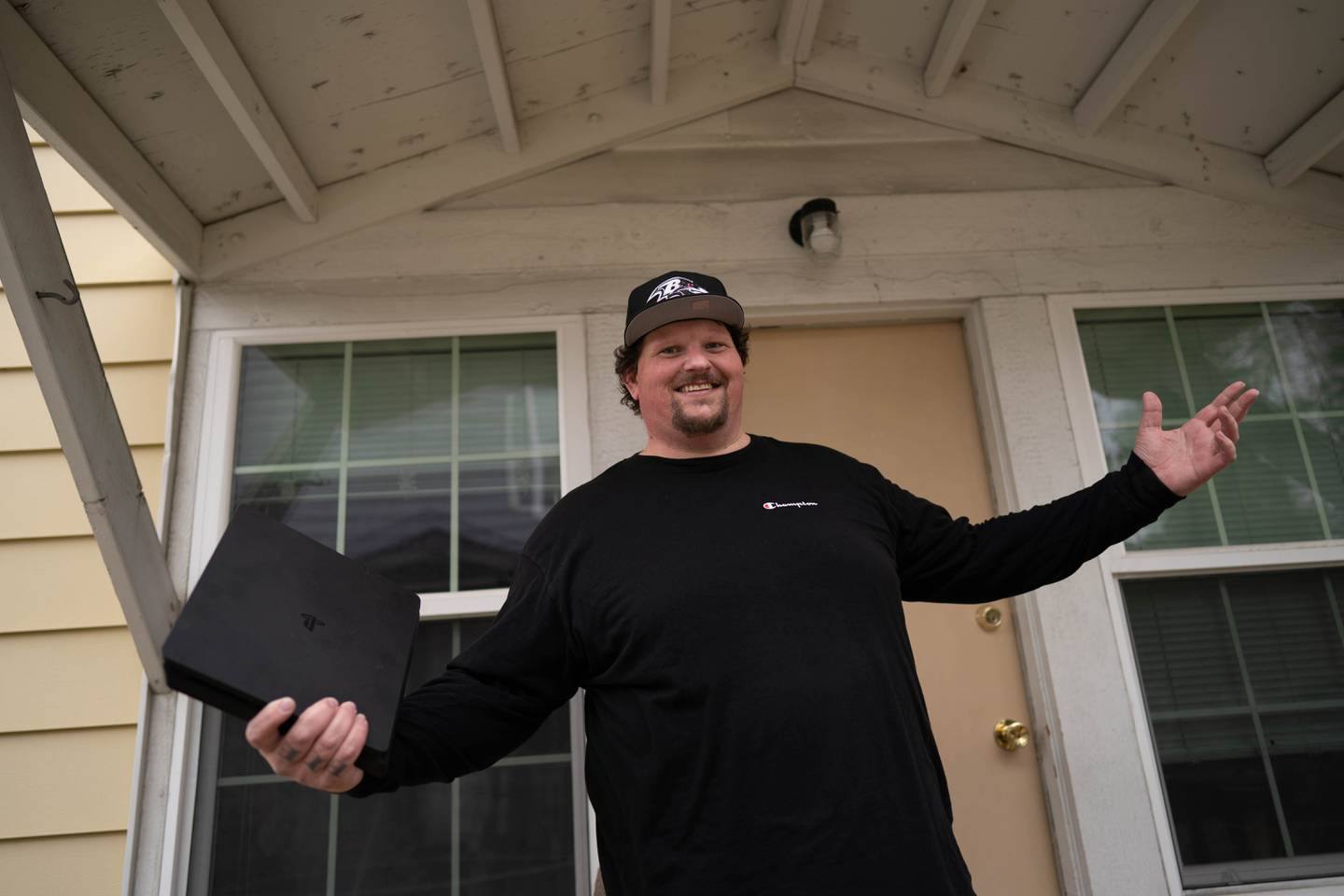 Jason Robards holds the PlayStation console given to him by Joseph Rice. (Loren Holmes / ADN)

Jason pulled into his parking place at home and sat for a moment, looking at the envelope. Then he tore it open. He found a note inside.

“This wasn’t a random encounter that we met. I’ve been wondering how I was going to get rid of my PS4. And God has brought you to me,” the note read. " … This is a sign that he wants you to be happy.”

Jason isn’t religious in the same way Joseph is, but believing in a higher power is central to his recovery. It wasn’t till the last part of the letter that he felt something inside him give way.

“It doesn’t matter what you have done,” the note read. “God loves you.”

“It was a good time in my life to have reassurance that I’m doing good, like, no matter what I’ve done in the past,” Jason said. “It was a God moment, you know?”

Joseph saw him as a person with potential.

And that’s how Jason found himself weeping in his parking place on a Wednesday night in March, with a new PS4 in the passenger seat. He still has the $40, he said, and he’s waiting to run into the right stranger to give it to.

Originally published by Anchorage Daily News on May 11, 2022