A year’s supply of rice and 15 mustards 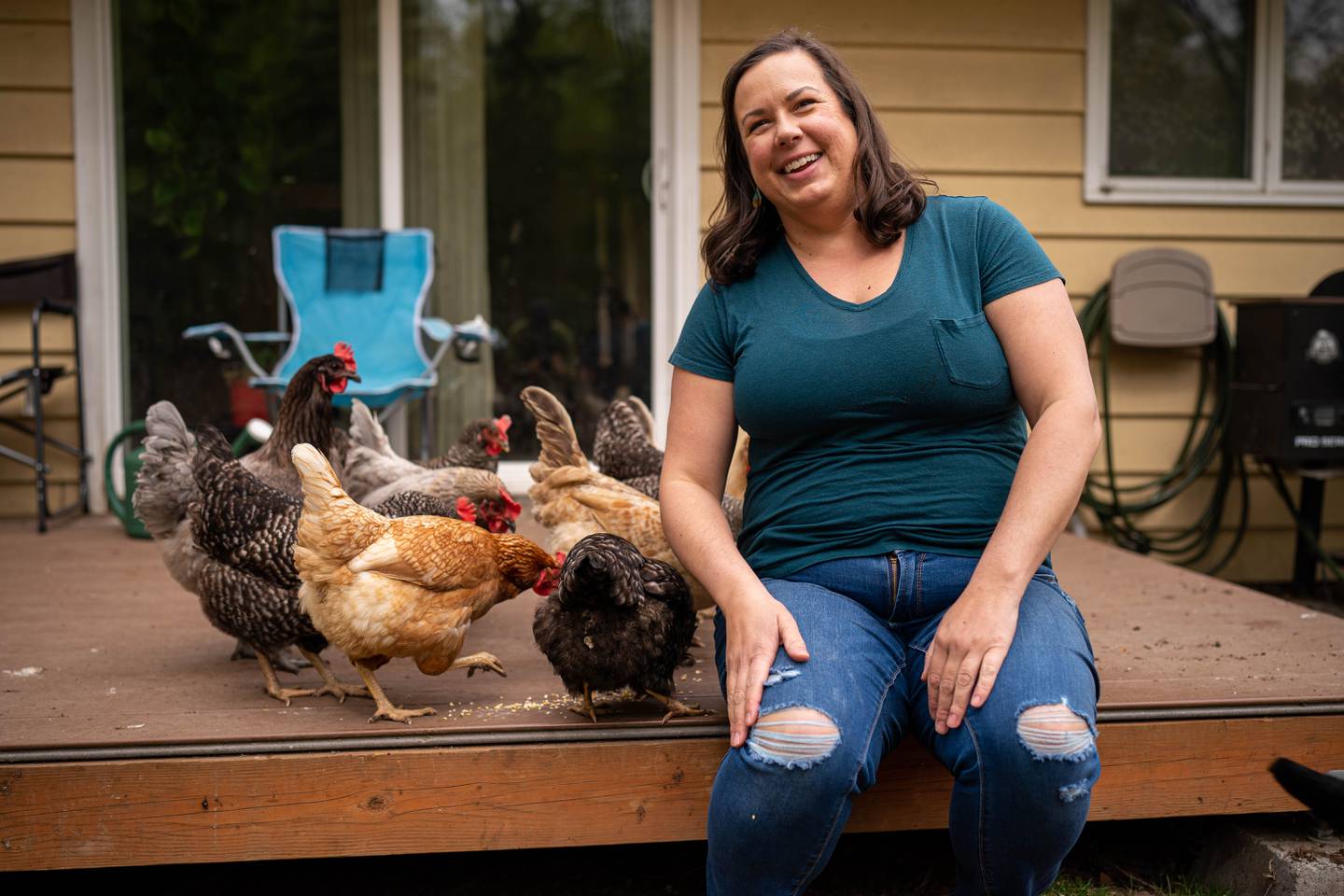 How did Ashley Waligura, a 35-year-old woman who lives alone, end up with 19 cans of black beans and another three pounds in bags in her pantry?

It started for her the way it started for a lot of us — the vaguely terrifying experience of rolling through the grocery store about two years ago and seeing a lot empty shelves.

“Everything was weird,” she said. “We suddenly couldn’t get anything we wanted when we wanted it.”

She doesn’t have family here. She was having a lot of lunches at home. It seemed logical at the time.

“I really wanted to take care of myself. It was something shelf-stable,” she said. “I got a little carried away.”

So carried away, in fact, her friends gave her the nickname “Beans.”

Many of us have gone similarly overboard at the grocery the last couple years. Everybody has their thing. Sugar-free chocolate pudding, Tasty Bites meals. Blocks of yeast. Twenty-pound bags of flour. A lot of us bought too much, not because of what we needed, but because of how we felt.

Alaskans are, by nature, provisioners, so we come by it honestly. Over-winter food storage is an ancient Indigenous tradition linked to survival. Our remoteness drives it. So do the extremely seasonal rhythms of our wild food harvest and agriculture. There’s also a built-in, stock-up habit some of us have, passed on from an older generation who still remember when winter produce came in cans that you bought by the case. But the pandemic turned all those instincts up a notch. You could say our pantries reflect our collective state of mind and the state of the world. They also tell us how we’re recovering from the pandemic years.

“I hadn’t intended on hoarding rice,” said Jerri Willcox, who works as an administrator for the federal government. “I was trying to avoid being part of paranoia. I never considered myself going over the edge. It was just one thing at a time, or one set of things at time.”

Short grain. Long grain. Basmati. Ben’s. They came in regular Amazon deliveries and she picked a bag up here and there at the store. She’s given some away now, but there’s still definitely more than 20 pounds in reserve. Two of her four children live up here, with five grandchildren. She felt this deep urge to be prepared.

“My parents were Depression-era kids and it affected them greatly, and I’m never without a good supply of food. The uncertainty of it, the worry that the world as we know it could be changing so rapidly and so drastically made me want to make sure my family was taken care of,” she said.

She’s relaxed a little now, but things still don’t feel right. So she’s holding on to a couple bags of rice.

Mary Rosenfield recently found seven containers of oatmeal in various cupboards and was a bit shocked. She and her husband were empty-nesters, but the pandemic brought their college-age kids home. Rosenfield remembers a March 2020 trip to Costco, maybe it was even before everybody started wearing masks, she had plastic gloves on, and she bought all these cleaning supplies.

“It was an existential dread, we didn’t know what was going to happen,” she said.

She suddenly had to think about cooking family meals again. So she bought peanut butter. And oatmeal. Lots of oatmeal. Her husband worked at a hospital and she was worried he’d get infected. Her children missed graduations and other important milestones.

Stocking up soothed her. Looking at her supply now reminds her how hard those days were, and how much easier it feels now.

“I just felt like oatmeal was a nutritious, comforting food,” she said. “... There was a lot of anxiety in our home.”

The kids have moved on and it’s just her and her husband again. She’ll likely make some oatmeal cookies now that she’s taken an inventory. She’s also ready to take a few bags to the food bank.

Even though all those months of empty shelves and limited staples like beans, flour and TP seemed to indicate that lots of people were stocking up, it’s hard to draw conclusions about whether people are still giving surplus to the Food Bank of Alaska, said Jenny Di Grappa, chief of philanthropy and community relations. Among the odder donation trends are people giving theme food boxes with items from other countries like Germany, she said. And, there has been a huge uptick in people donating expired food, possibly indicative of some people deep cleaning pantries.

“We were seeing larger food donations a year into the pandemic than we are now,” she said “People were saying, ‘Hey I bought $1,000 worth of food and it’s reaching expiration.’ ”

Often, she said, they encouraged people to keep their food supply if they thought they were going to eat it. They directed people to the government’s foodkeeper app, which helps people understand the shelf life of foods. But now would be a good time to donate, she said. The food bank is experiencing a big uptick in need as certain government benefits expire, and larger donations are down because of the uncertainty in the business world. 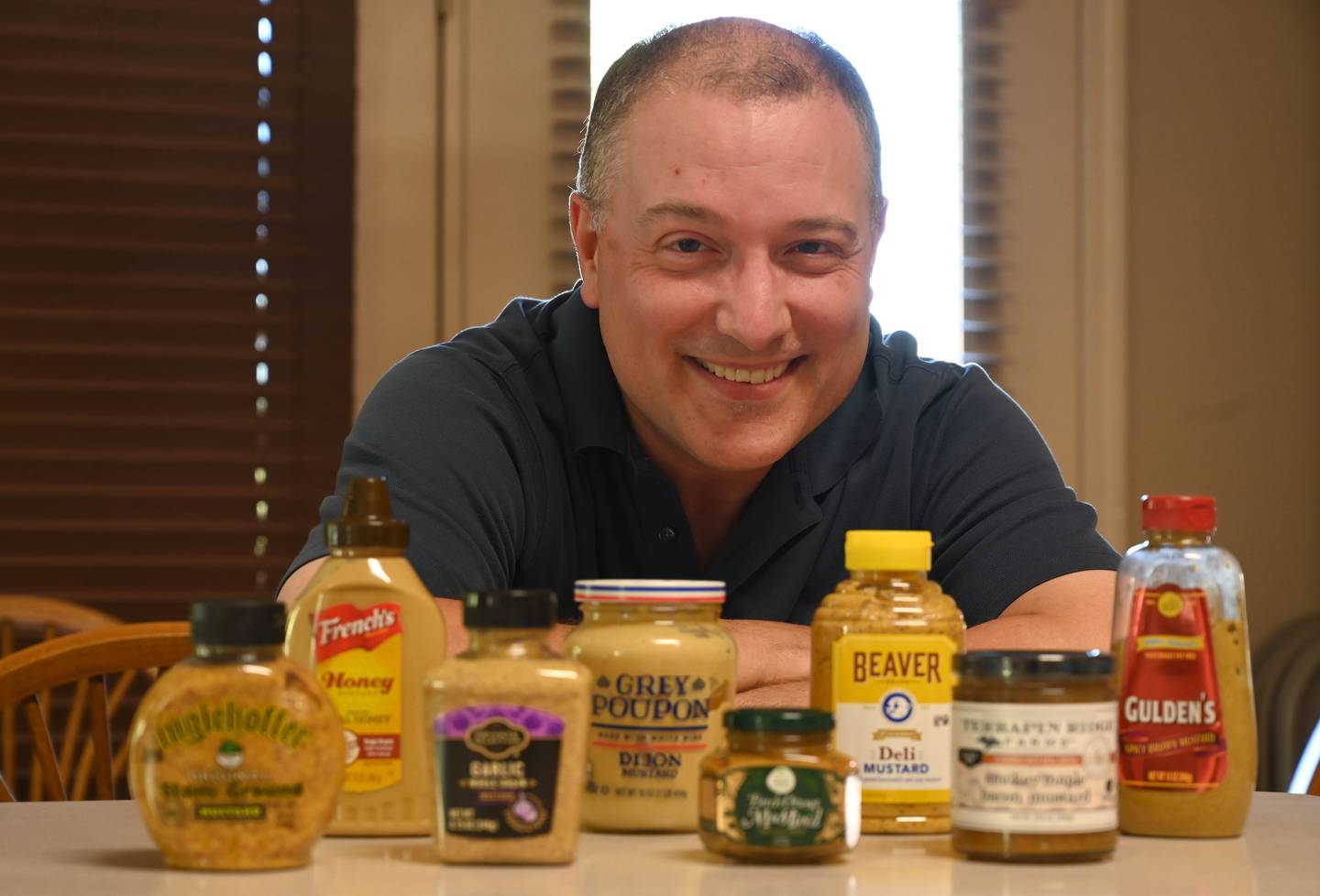 Jeff Stout is cultivating a collection of mustard. The interest began during the pandemic. Photographed May 19, 2022. (Anne Raup / ADN)

While the pandemic led some to fill pantries with emergency supplies, others, began to accumulate supplies because the pandemic gave them time to explore culinary passions. Jeff Stout, a mail carrier who lives in Wasilla, went through a home cooking and baking renaissance because they were eating out less and spending more time at home. He and his wife got so into their home kitchen, they cleared out a room in their house to make space for food items and equipment. Stout’s always been a condiment guy, but in pandemic years, he fell in love with one condiment in particular.

“I love mayo and ketchup … but those aren’t that healthy,” he said. “So I started getting into mustard.”

His collection is still growing. French’s regular and honey, Inglehoffer stone ground, smokey maple and bacon mustard, Grey Poupon, Boar’s Head, Gulden’s, Beaver deli-style, garlic mustard, birch orange mustard, a little Heinz yellow mustard that can slip in a pocket. There are presently 15 containers taking up so much fridge real estate, he might get them their own. 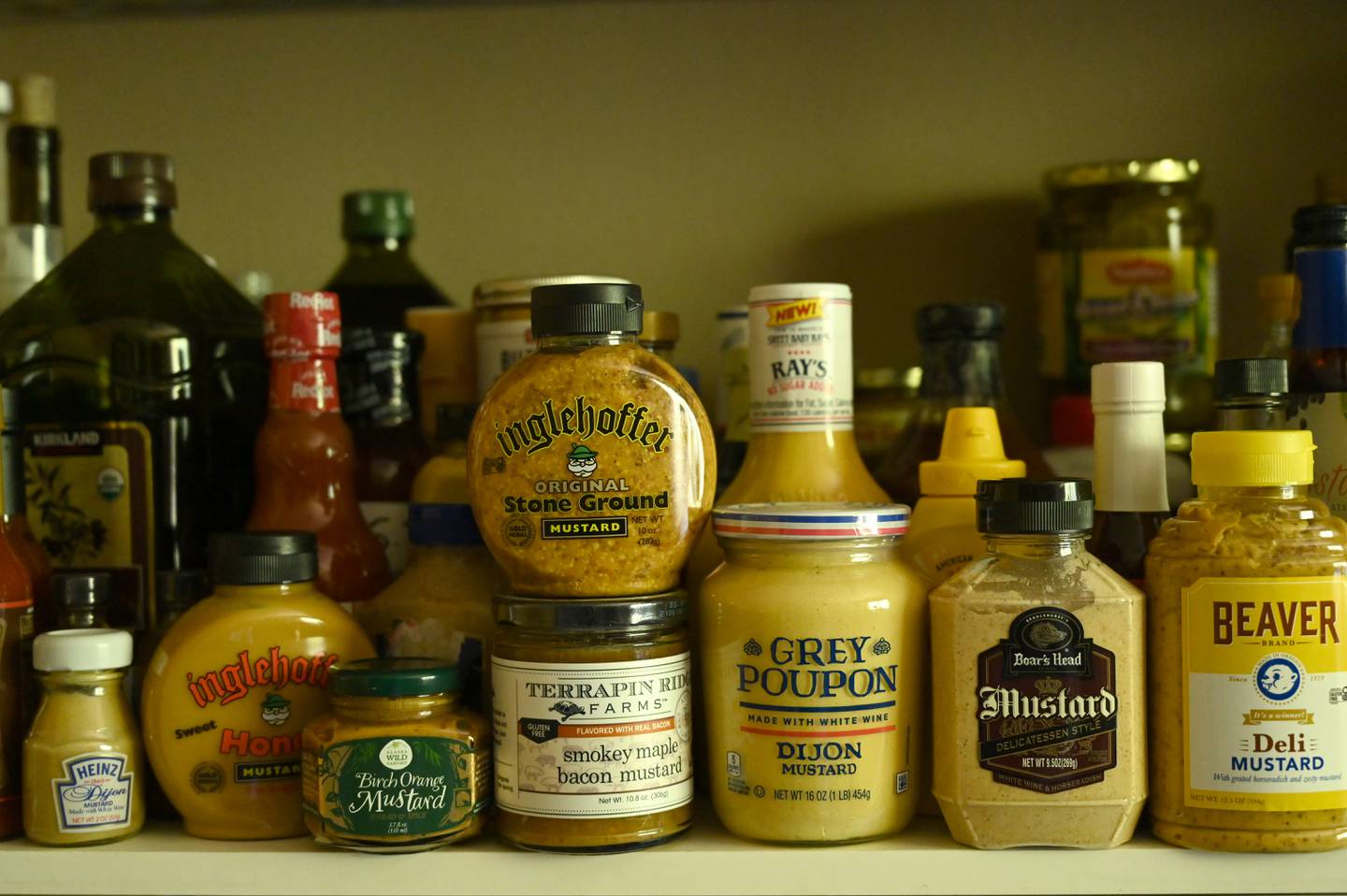 Jeff Stout has a well-stocked pantry, including his collection of mustard. (Anne Raup / ADN)

“It’s about 14 more than my girls think I should have,” he said.

Sandy Burson, a high school teacher, went deep on institutional-sized cans of baked beans. One of the pandemic grocery weirdnesses she noticed, she said, was that certain items the store brought in when lots of the shelves were empty started to be discounted as their expiration dates approached. The pandemic made all groceries feel a little more precious. Add a good deal to that? She couldn’t resist.

“Oh heck yeah! $2 a can for those beans? I put two in my cart, then I did some shopping, and then I put more in my cart. Before you know it, I had nine,” she said.

Her husband, who usually makes the beans, was a little surprised. Though at the time, she also had 17 cans of SPAM in the pantry. (She’s since unloaded those on her son.) They bring his famous barbecue beans to every potluck and church dinner. But there’s still a lot.

“We are going to need to manufacture an occasion to eat more,” she said.

She still notices supply chain problems every time she goes to the store, she said. Maybe that’s the new normal?

“The world is just changing, we’re never going to do things the way we did before,” she said.

Gina Struble started accumulating Clorox wipes early in the pandemic. She had them on Amazon order when they started selling out at local stores, so she ordered more. It felt good to have a supply to be able to give them away, even after things relaxed and nobody was wiping down groceries anymore. At last report, she still had 11 containers.

“It just felt like that one little, I don’t know, something I could actually do when the rest of the world was out of our control,” she said.

These days, she feels far differently than she used to about the pandemic’s risks. She works in health care and watches the numbers carefully. Things didn’t turn out as dire as everybody feared. She also stocked up on food, but recently she gave away four boxes from her pantry.

“I recognized that I didn’t let go of my Clorox wipes,” she said. “I had something to hold on to just in case.”

There’s still a lingering thought, she said, that we’re not out of the woods and another significant variant could appear.

For all the ways the pandemic years divided people, they also caused some of us to connect to those closest to us, to check on our neighbors and family, and to share when we had extra and knew someone was in need. 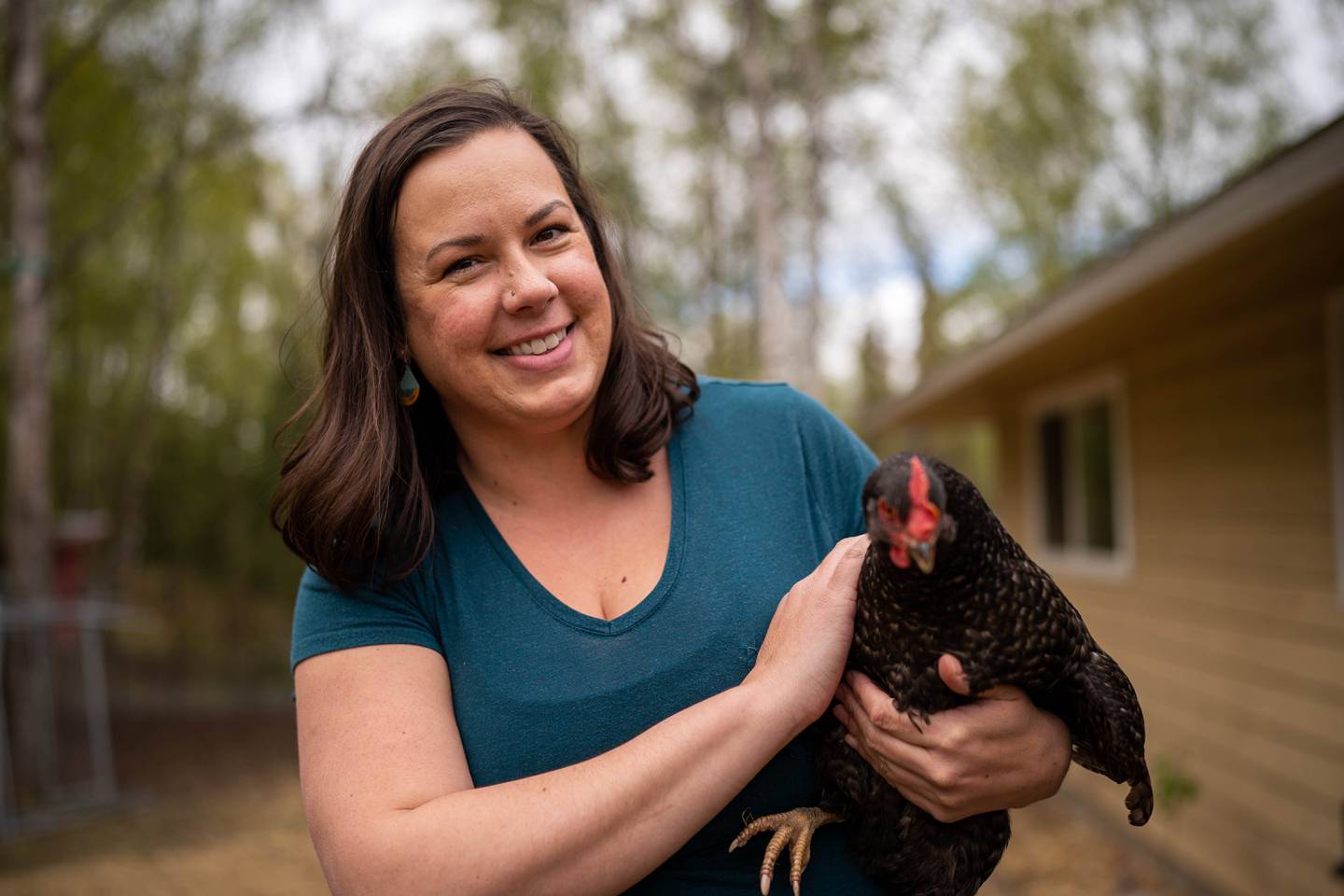 Ashley Waligura, of the many pounds of black beans, got divorced during the pandemic. Then, she moved with her dog and some chickens to Eagle River, where her neighbors introduced themselves and made her feel less alone. Now, they trade eggs and salmon and zucchini, she said. She’s eating her way through her bean supply and doesn’t feel the need to store so much.

“If I need something,” she said, “I can just go across the street and ask someone.”

Originally published by Anchorage Daily News on May 29, 2022