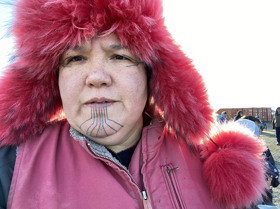 Allison Akootchook Warden is an Iñupiaq artist born in Fairbanks, Alaska, with close ties to Kaktovik. Her performance name is AKU-MATU. Her work, "siku/siku" debuted at the Arctic Arts Summit in Harstad, Norway in 2017 and in 2016 she debuted "Unipkaaġusiksuġuvik (the place of the future/ancient)" at the Anchorage Museum.  "Unipkaaġusiksuġuvik (the place of the future/ancient)" is a performative installation of an Iñupiaq ceremonial house that exists in the space between the hyper-future and the super-ancient. She has received numerous awards and has performed throughout the world. For her residency, she is focused on developing an Inuit Futurism Center (virtual, conceptual, and throughout Alaska).

From the Anchorage Museum blog

From the Anchorage Museum Store