Contemporary capitalist society possesses a phenomenon called the ETF or exchange-traded fund. A person can invest in "futures" by buying a stake in an asset they do not yet own or does not yet exist. This hinges on the bet that once the asset does functionally enter a market, its valuation will exceed the initial investment. One such class is the water commodity ETF, where one can invest in water "futures." Water is a commodity that is pitched to investors as "portfolio diversification" because of its security. This is because water, as is already understood by the most precarious communities, is becoming increasingly and alarmingly scarce. Meanwhile, in a market context, it is projected to garner increasingly higher valuation per gallon as scarcity persists and expands, leading to both profit and access for those who have laid claim to its "futures" as property.

However, this hinges on the misconception that water can be "owned," demarcated, and sold.

This design, a passive atmospheric water generator, with composite fabric, seeks to contribute to millennia of research toward the harvest of water in places where it is scarce. It is also an attempt to contribute to the pursuit of water liberation, where capitalism seeks to seize the ultimate means of production, the core of all living processes in the world, and the means for their perpetuity. Through a hydrophobic warp and a hydrophilic weft suspended angularly, each panel is intended to maximize the ambient absorption potential of the fabric of ambient moisture while aiding in the passive drip collection within an underground cistern for storage and access. 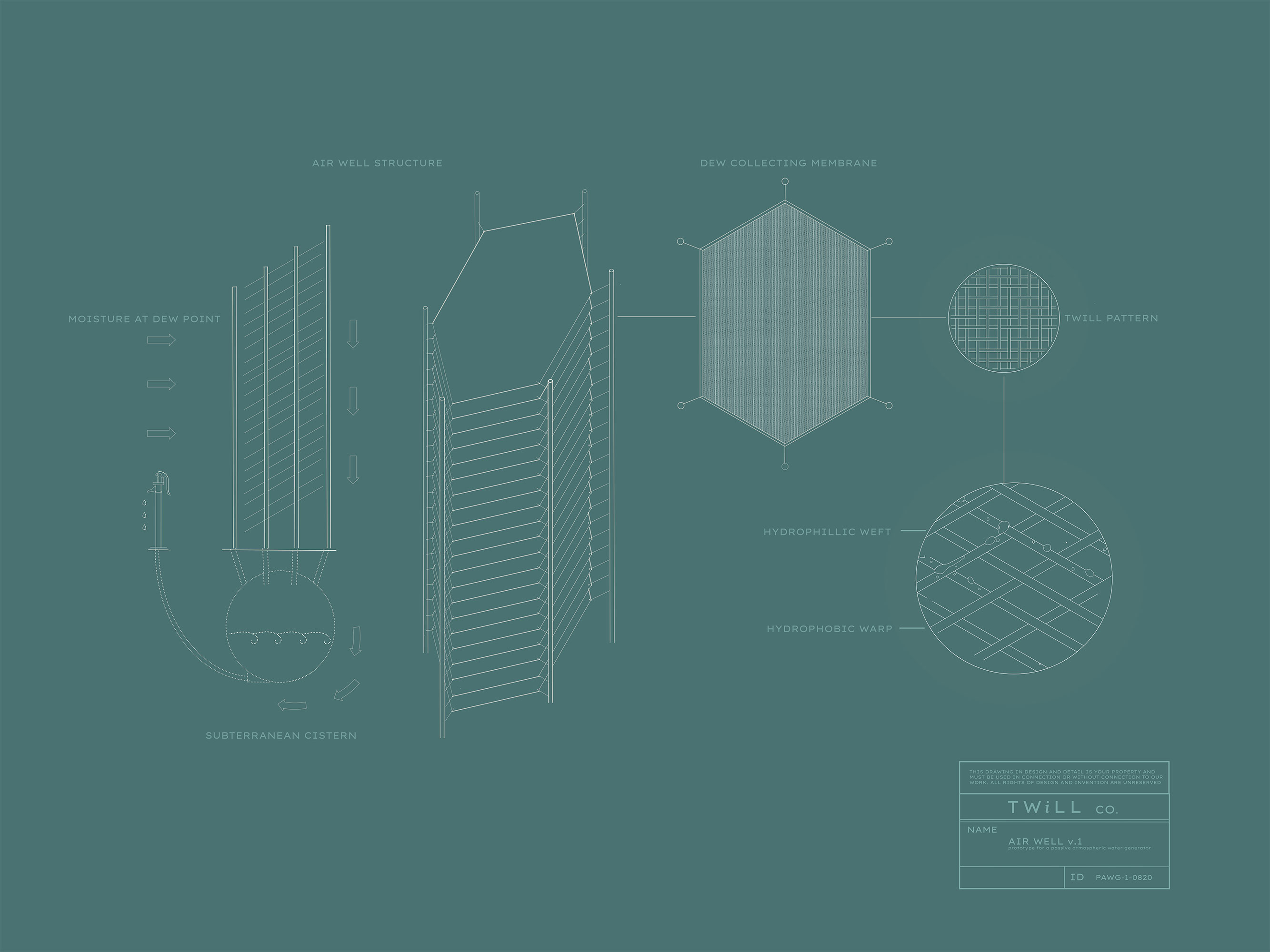 This design seeks to leverage museums' penchant for suspending objects from time through the use of conservation sciences. It attempts to consider items inviting institutions with an ethic of conservation to become stewards and collaborators by using their existing practices and schemes to tend, protect and maintain a Seed in suspended animation as long as the institution endures.

The World Seed portrayed seeks to organize a microbiome and speculate what moments before biogenesis and novel organisms' formation could look. The more World Seeds are in existence and under stewards' care, the greater the odds of successful biogenesis in a potentially inhospitable future. This iteration of the design desiccates chroococcales, early cyanobacteria capable of existing for centuries in a suspended state, housed in a mycelial casing, covered by a degradable composite containing seeds for symbiotic phyto-extractive plants, all capable of tolerating toxic and conventionally inhospitable environments for organism growth. The entire object is encased in a fully vitrified ceramic shell to repel moisture and maintain a desiccated internal state. The design contemplates which union of symbiotic organisms might create the most resilient cooperative relationships through phyto and mycoremediation. It must be exquisitely crafted for its temporal success, yet, more importantly, the Seed contemplates disruption from a state suspended animation and its inevitable failure as a formal object to be the site of its most vibrant moment of utility; becoming a trigger for the potential of self-perpetuating life and regeneration. 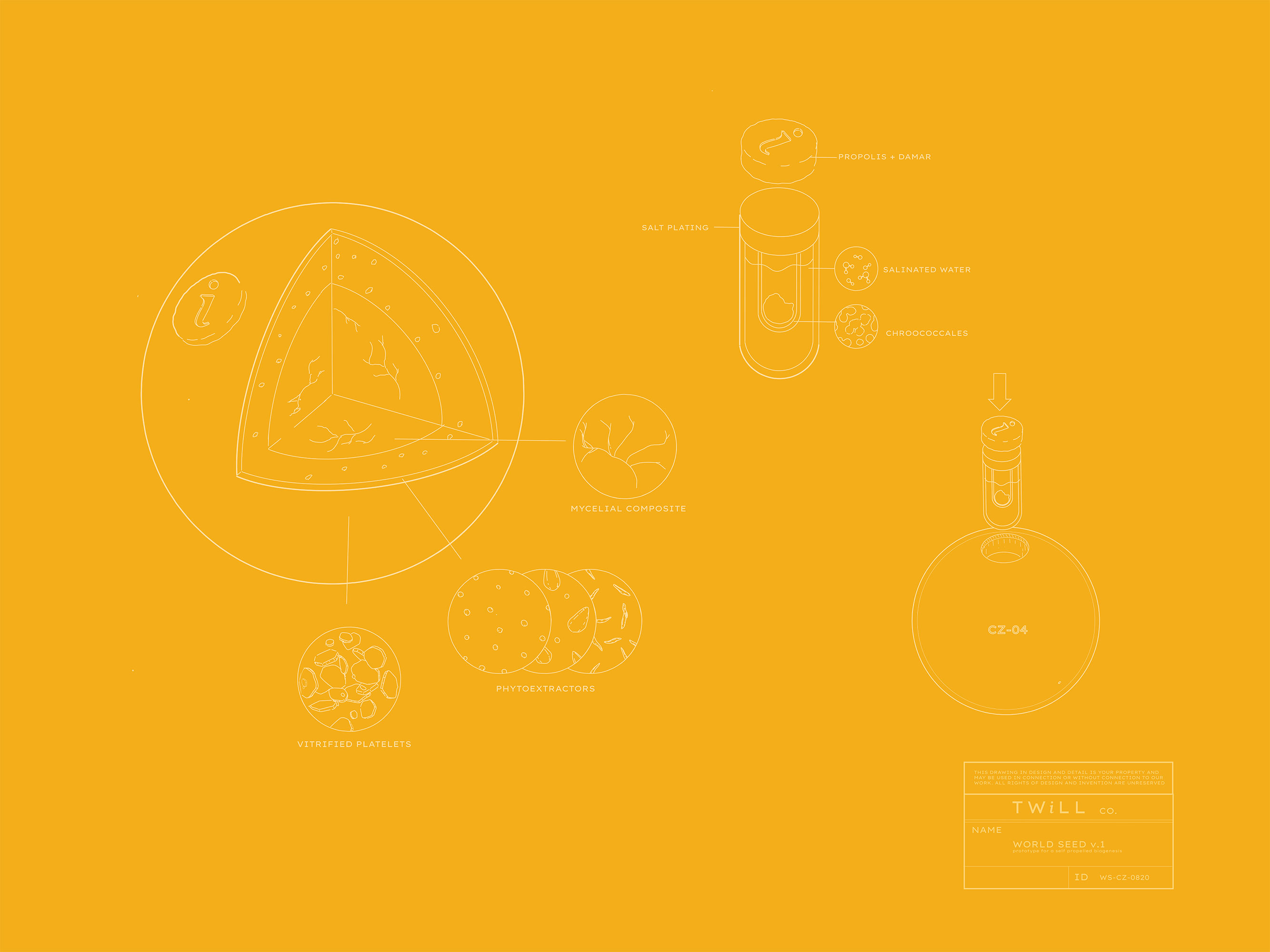 This design is informed my movements as a migrant, with over twenty years of perpetual motion and precarity. It speculates what sorts of architectures might emerge from the application of traditional crafts, the sciences, and a culture where place and sovereignty are separated from notions governing property, in a future where climate redistributes and repossesses entire regions. It also contemplates how one might lay claim to the process of migration as a perpetual collective state, as architectures intended to be enduring cannot be depended on to remain continually hospitable. It speculates a psyche acknowledging displacement as a collective truth seeks to lay claim to the state by pursuing a greater understanding of the ground beneath one's feet. Alienation is one of the greatest threats to human and ecological existence- the design is an attempt to create simple tentlike structures, each deployable, customizable, individually portable architectures, and devices, that can sustain the living process and be carried on the back of one person. The design also speculates how the sciences and humanities, might be reconfigured toward a deeper more grounding understanding of our environments, instead of their mastery; entertaining the potential existence of individual and collective sites for living, learning, and working toward a more comprehensive, grounding understanding of human-nature coexistence. 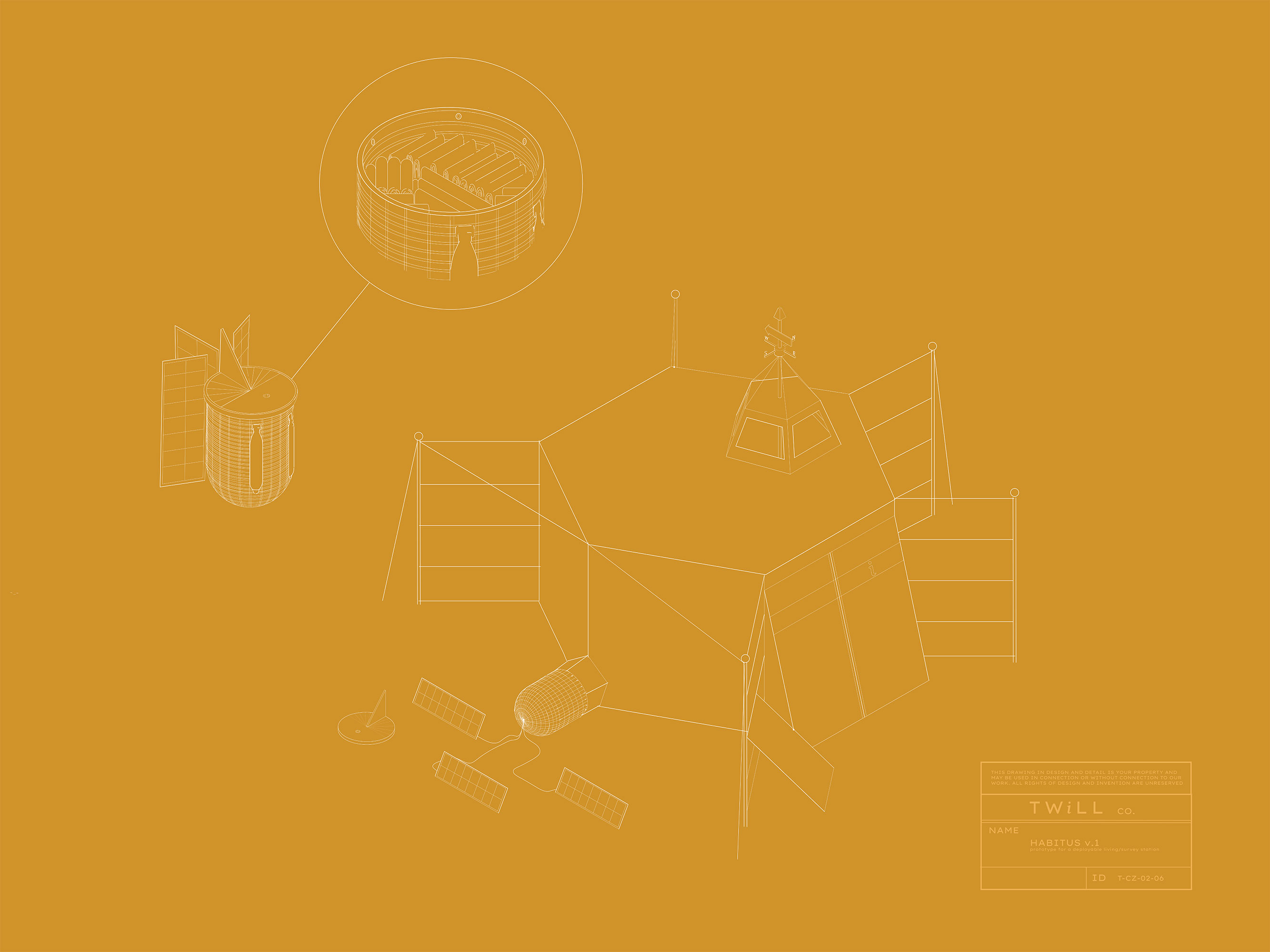