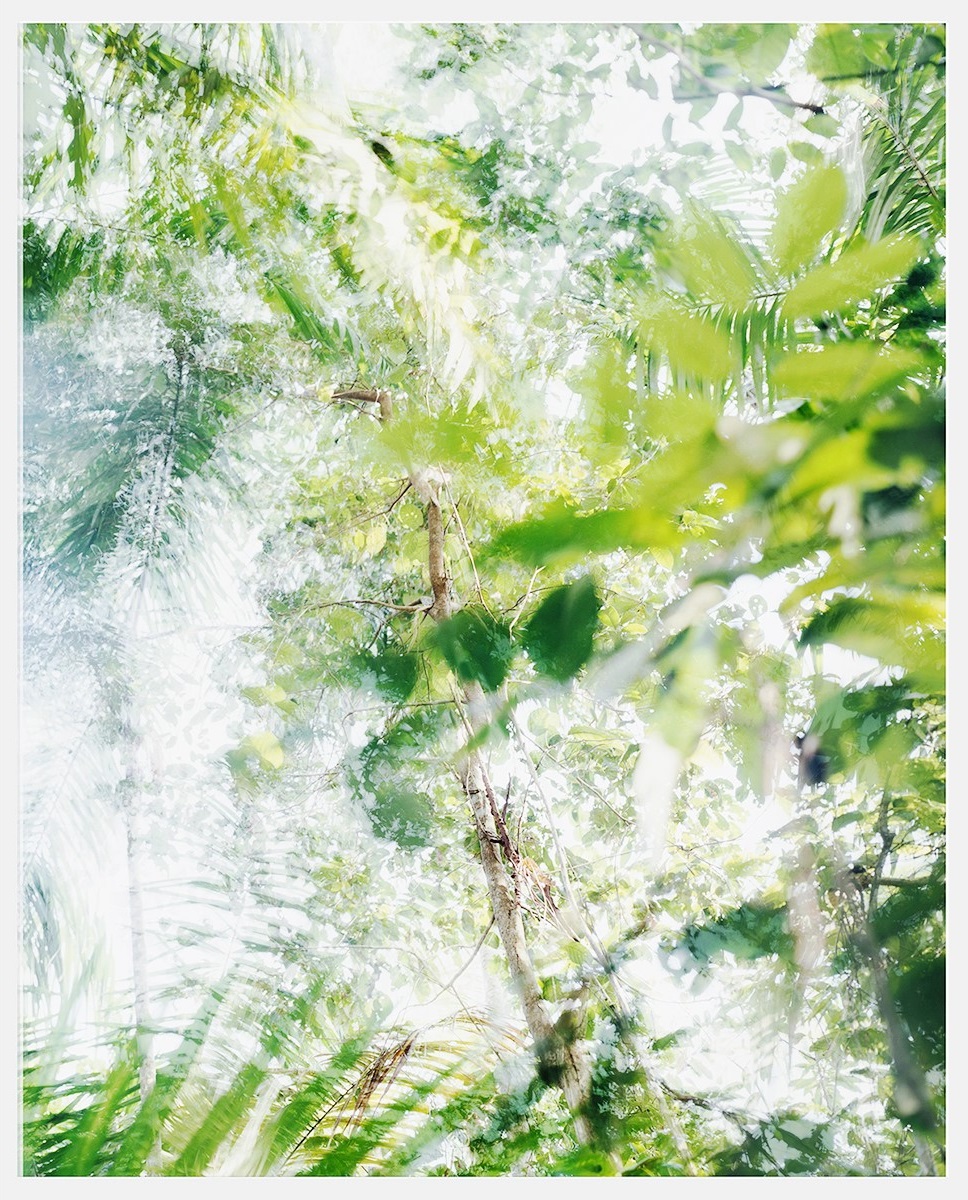 This essay examines how both[1] a (re)conceptualization of time, from a linear perspective toward one of simultaneity, can help the public better comprehend the climate crisis, and[2] the potential art and photography have to translate this shift, using the Far North and associated narratives as a site for this exploration.

We all lean into stories to find our way through the thick forest of experience to understand ourselves in relationship to the world. The structure of a singular, linear narrative anchored in the chronologic has long provided structured order to time and space. Its consistency, made up of a beginning, middle and end, with a character at its center, has been the bedrock of contemporary Western thinking for millennia. However in contemporary culture, Internet and smartphone-based cultures are loosening sequential thinking, replacing it with weblike associating that generates a sense of a semi-chaotic networks of contemporaneousness. Identity, now set against a constant and rapid flux of all-at-once-ness, is battling a culture long rooted in the steadiness of chronology.

The Far North is a site of extremes. Its many narratives are most often found in the form of familiar dichotomies. It is known as a land of: legends and facts, myths and data, perpetual darkness and endless light, and the inspiration for qualitative (poetic) and quantitative (scientific) investigations. The most dominant Western narratives have been laced with tales of survival, human ingenuity, tragedy, perseverance, failure, and a reckoning with God and spirit through journeys taken through the most formidable regions of territory and mind.

On the other hand, narratives from indigenous cultures in northern regions rooted in the Inuit Ways of Knowing (IWOK)1 (violently denied by colonialism), are ecological, sustainable, relational, cyclic, interdependent, and holistic in nature[2]. As described by Gregory Cajete PhD, scholar of Indigenous Science and Knowledge, IWOK are guided by spirituality, ethical relationship, mutualism, reciprocity, respect, restraint, a focus on harmony and an acknowledgment of interdependence[3]. They emphasize belief in the presence of a spirit in all things, as well as the existence of otherworldly or spiritual dimensions that interrelate with the material world[4]. In other words they hold space for overlapping and synchronous experiences and time scales serving as a conceptual framework for a perceptual return to simultaneity.

As the North is a key barometer for the impacts of global warming, the relational framework of IWOK reinforces the deep need for humility in the Anthropocene. These integrated primary understandings of the region amplify deference and supply a desperately needed counterpoint to those tales of the heroic (foreign) explorer, necessarily quelling the human ego established by Western thinking and its related aggressive and destructive behaviors. IWOK stories are poetic tales built out of the clarity that we are a species living within the full-layered interconnection of it all. They fully and symbiotically register the sensitive nature of Arctic systems and the understanding that the most important form of practical and spiritual intelligences is born out of working with and tending to its harsh fragility.

While our increasingly mediated ways of experiencing reality challenge and destabilize our temporal understanding of ourselves, this paradigm shift (or rather a return to the “original” paradigm) is pertinent in allowing a deeper connection to understanding the abstract complexities of climate change. Synchronousness sets the human experience, not as a singular dominant narrative, but as one of many within a range of micro (quantum) to macro (planetary) temporal scales. Synonymous with IWOK French theorist Bruno Latour emphasizes, the anthropocentric constructs of nature and culture have always been conceptually and temporally intertwined, as one cannot be defined without the other[5]. This split conceptualization has long dominated and (violently) separated humans from our true relational position as interwoven into Earth’s energetic planetary networks. This (re)integration of “Nature/Culture” suggested by Latour along with a slew of other contemporary post-humanist philosophers, is not only a (re)alignment with IWOK but also with a wide range of indigenous philosophies (as well as threads of Tibetan Buddhism, Transcendentalism and Paganism, and it is the basis of Gaia theory). Within the breadth of (re)accepting these perceptions of time and the unified concept of Nature/Culture, we can, consistent with these philosophical threads, collectively reconcile our understanding of the self as inseparable from the planetary whole and will more readily come to care for it as we care for ourselves.

The challenge now is how to bring an attentiveness to the complexity of earth systems, their intricate effects and our force within them to dominant Western culture, in order to newly comprehend an integrated Nature/Culture identity in relationship to the climate crisis. The clearest approach is first to honor and rekindle the primordial understanding (IWOK) that we exist as part of a web of ever-evolving inter-related systems. As we transition from thought patterns rooted in chronology that imply a(n arguably false sense of our) control over time (and planet) towards a de-patterning of disparate narratives that are often difficult to grasp or relate against each other, we can open ourselves up to new ways of perceiving. We can recognize the interconnectivity and interdependence of many continuously evolving perspectives, narratives and living forces, allowing an ever-expanding (versus fixed/resistant) position within it all.

For over a decade, as a visual artist I have been working predominately in the Far North. I use the factual location of the North and associated metaphors to help translate the complex role humans play within a warming planet. Each of my projects functions as its own systemic conceptual platform, and together they form a kind of “worlding;” as Heidegger deemed: a generative process of world making, world becoming and a “bringing-nearer”[6]. They also allow space for Donna Haraway’s concept of “making-kin”[7] which emphasizes redefining our relationships with multiple species and our role as one species within a multiple species world. My works offer a range of inter-connective, temporally unrooted portals to consider our intricate and complicated relationship to our planetary home and our human and non-human kin.

Photography is inherently tethered to the temporal, so is an ideal tool to allow us to comprehend simultaneity through its ability to point to both the discreteness and edgelessness of time. While my works are rooted in photographic media, their production, processes and presentation are vital to grasping their underlying conceptual content. For example, Terra Systema, made up of a collection of layered photographic prints, complicates our sense of time and transmogrifies the melt of the Greenland ice sheet and the tropical rainforest into respective circulatory and respiratory systems, scaling the planetary to the human body.

In response to the growing concern about the impacts of climate change on the Greenland ice sheet, through travels to the town and surrounding area of Kangerlussuaq, with scientists from Dartmouth College’s Institute of Arctic Studies[8], I explored the kinetic life of the ice sheet melt by using unconventional photographic techniques to conceptualize it as a circulatory system. Concentrating my camera on the accumulation and movement of water of this colossal mass of Arctic ice, the work follows a path from the icesheet until it reaches a nearby fjord. The melt starts as glistening drips that eventually cumulatively builds to an exponential force powerful enough to effect the stability of Earth’s network of ocean currents, i.e., its circulatory system.

Based at the Smithsonian Tropical Research Station[9], on the island of Barro Colorado in the Panama Canal, I used the same techniques to translate the tropical rainforest as a kinetic living, breathing planetary system, situating the viewer within the respirating motion of the canopy tracing the kinetic interplay of light and air as breath within this living system.

The photographic works Flumen (current), from the ice sheet, and Respiro (breath), from the rainforest, are made up of two photographic prints of differing exposures (sharp and soft edged). One print is overlaid onto the other, so the translucent archival vellum print on top reads as a kind of skin and allows the image on the archival inkjet print on the bottom to blend through. This enhances the spacial dimensionality of the velocity of aquatic flow and the “breath” of the forest. Combined, the print-pair generate a sensation of dimension, trace and motion as a viewer moves past the large framed pieces[10]. The full installation of Terra Systema is designed to suggest time’s edgelessness and to inspire an uncanny sense of awe through the possibility of global-scaled comprehension and the twinning of the planet with ourselves.

Many of my photographic projects offer this loose footing in time but also intentionally interrelate our fixed associations with place (Arctic/tropics) to establish an acceptance of global and synchronous narratives. By ceasing to suggest specific temporal edges, encouraging a perception of time loosened from the linear, my projects make room for the viewer to interrelate  with the planetary and understand themselves within the overwhelmingness of “the whole.” In this, simultaneous storylines and perspectives have a stage for evolving together and within each other. There is room for both “worlding" and for “making kin”[11] with all non-human life forms in new ways. With this shift comes an inevitable humility with the suggestion of relearning the self and what it means to be human within it all at this tentative threshold in our relationship to the natural world. As we come to (again) comprehend ourselves not above or outside but within the interconnectivity of Earth’s interwoven natural and manmade systems (Nature/Culture), in turn, with renewed and fervent commitment, at a moment of great urgency, we will come to collectively learn to care for it as ourselves.

Christina Seely is a visual artist and an Associate Professor of Studio Art at Dartmouth College. She is currently working on a self-designed master’s in Theological Studies at Harvard Divinity School considering art as a space of spiritual holding in conversation with science as a way to build more effective climate crisis communication. Her works Dissonance and Disturbance are exhibiting at the museum from November 5, 2021 - September 4, 2022.