Derek Boogaard, one of the National Hockey League’s most feared enforcers, died of an accidental overdose of alcohol and oxycodone in 2011. An autopsy revealed his brain to have chronic traumatic encephalopathy. “Like the mythological Icarus, he had flown too close to the sun,” said artist Michael Conti. Conti’s solo exhibition at the Anchorage Museum, Stick and Puck, uses Boogaard’s tragic story, along with photographs, sculpture and film, to examine hockey from social, cultural and gender perspectives.

The job of enforcer, an unofficial role in ice hockey, is to deter and respond to dirty or violent play by the opposition and to protect and avenge the smaller, more skilled players. “The life of an enforcer is one of broken hands, penalty minutes, missing teeth, black eyes, broken jaws and painkillers,” said Conti, a photographer and video artist based in Anchorage, Alaska.

“Hockey is the only sport where the game is stopped to let the players duke it out with bare knuckles,” said Conti. “I think there must be a primitive, cathartic human need for violence, as old as the need for art: To experience it and to watch it. This kind of activity takes its toll.”

Approaching the world of hockey not simply through the lens of a fan, but rather as a cultural observer, Conti sees many of society's "norms" and expectations played out on rinks around the North and the U.S. He has created hockey pucks with teeth and Percocet inside them and carved hockey sticks from driftwood. A mask sculpture, instead of being an example of protection, is covered in stitches. A mixed media “penalty box” depicts brain injuries.

Portraits of female hockey players represent a counterpoint to the violent aspects of the game. “Photographs of young women in hockey look to the future of the sport, and images of the experienced female players are a nod to what has already been accomplished,” said Conti.

Conti has received numerous awards for his photography and his video work has been shown at the Nam June Paik Art Center in Seoul, South Korea, and at ContainR at the Winter Olympics in Vancouver, Canada.

The Patricia B. Wolf Solo Exhibition Series is presented with generous support from the Alaska State Council on the Arts; the National Endowment for the Arts, a federal agency; and the Anchorage Museum Foundation’s Alaska Airlines Silver Anniversary Fund. 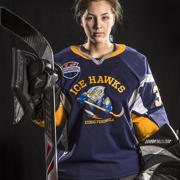 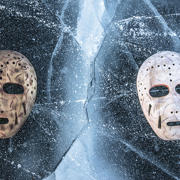 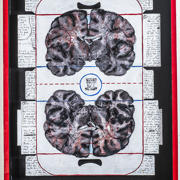 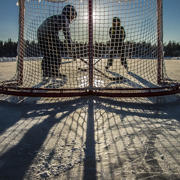 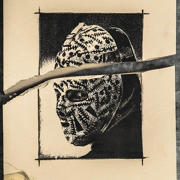 Michael Conti
mixed media on board

The Northern Light - ‘Stick and Puck’ showcases professor’s colorful side