Brian Adams is an editorial and commercial photographer based in Anchorage, Alaska, specializing in environmental portraiture. His work has been featured in both national and international publications, and his work documenting Alaska Native villages has been showcased in galleries across the United States and Europe.

For Shelter/Refuge Landforms, featured images are from Adams’ visits to forests that were burned by the Swan Lake forest fire of the summer of 2019 along the Kenai Peninsula. The remnants of that fire created prime habitat for morel mushrooms and attracted many to the burn areas of the forests to forage in 2020, including Adams. Mushrooms and fungi help break down tough debris and plant material and support tree growth. Morels have adapted to fire. The Swan Lake fire burned with a variety of intensities over the four months it was active on the Kenai Peninsula, burning hot through black spruce stands while dancing lightly around wetlands. Wildfire in Alaska’s forests creates a mosaic of different landscapes. Animals in this fire-adapted ecosystem react to smoke just as humans do, moving away and seeking shelter in safe zones like wetlands and lakes. Though some individual animals may not avoid harm, their species’ population benefits as a whole from the forest’s rebirth after fire. Regrowth of new plants has begun within the Swan Lake Fire scar. The boreal forest restarts through a process called succession. 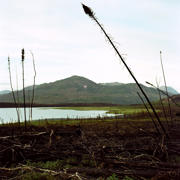 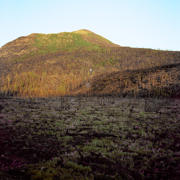 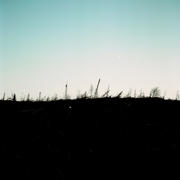 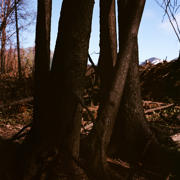 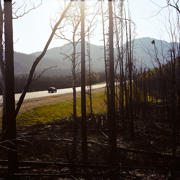