Acacia Johnson is a photographer, artist, and writer from Alaska, focused on human relationships to wilderness. A graduate of the Rhode Island School of Design, Johnson received a Fulbright grant to Canada in 2014, to overwinter on Baffin Island. Since then, she has been increasingly interested in anthropological themes in the Arctic and Antarctica. Her work is housed in collections including the Anchorage Museum and the Smithsonian Museum of American History, and has been featured by numerous publications, including National Geographic, TIME, and NPR. Johnson also works as a seasonal expedition guide and lecturer in Greenland, Svalbard, the Canadian Arctic and Antarctica, where she lectures on photography and visual representations of the Polar Regions. She has made over 55 expeditions to the Polar Regions for work and personal projects and is currently pursuing her MFA in Creative Writing at the University of Virginia.

About the Work (Artist Statement)

Across the circumpolar Arctic, sea ice forms the basis of the marine ecosystem that has sustained Indigenous cultures for millennia. In the Canadian territory of Nunavut, the Inuit people have subsisted off the land and sea for nearly 5,000 years. Today, communities navigate cultural shifts between the values of elders raised in a nomadic hunting lifestyle and younger generations growing up in modern villages. The sea ice, where it persists, remains an ever-changing landscape on which families travel together, hunt for food, and pass on traditional knowledge.

In 2014, on a Fulbright grant, I spent a winter photographing in the northern community of Ikpiarjuk, Nunavut. What began as a landscape project grew into a deep interest in Inuit culture and lasting friendships in this remote settlement. In the spring of 2018, I returned to reconnect with friends and photograph how sea ice is essential for community traditions—and for the preservation of indigenous knowledge, a critical component in global dialogues about climate change.

In the past three decades, multiyear sea ice—the thickest type that supports the marine ecosystem—has declined globally by 95 percent. Elders can no longer predict safe travel routes on thinning ice, and animal migration patterns are changing. Yet every spring, when animals migrate north and the sun never sets, Inuit children in Ikpiarjuk join their families on camping trips to ancestral hunting grounds, where they learn the hunting skills and cultural values passed down since time immemorial. Although the future of the ice is uncertain, the families I traveled with explained that maintaining a deep understanding of the land is an essential part of adapting to change.

Even in some of the harshest conditions on earth, a healthy landscape can serve as a shelter by sustaining its people, traditions, and stories. Sea Ice Stories is an effort to portray this. I am deeply grateful to the families who welcomed me into their lives, and look forward to the day when I may return. 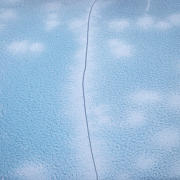 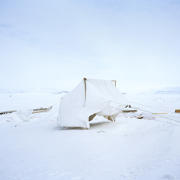 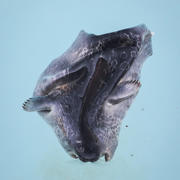 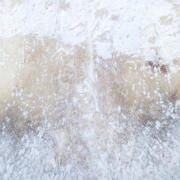 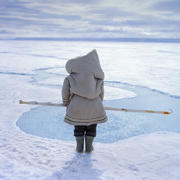 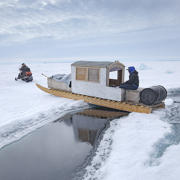 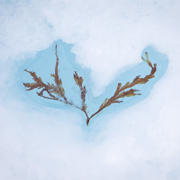 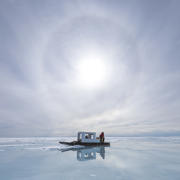 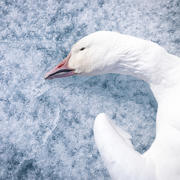 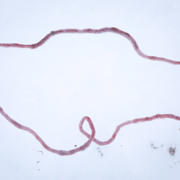 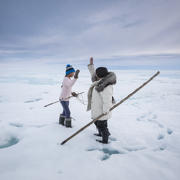 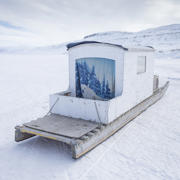 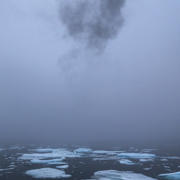 Acacia Johnson
Not The Picture You Asked For (Cruise Ship Exhaust Over Sea Ice), 2014
Nunavut, Canada