Indigenous women from throughout Alaska share stories and photos of their traditional markings. Traditional markings may vary in placement and style. Some common markings include: tavluġun (chin tattoo); iri (tattoos in the corner of the eyes); siqñiq (forehead tattoo, also meaning “sun,”); and sassuma aana (tattoos on the fingers representing the sea mother). 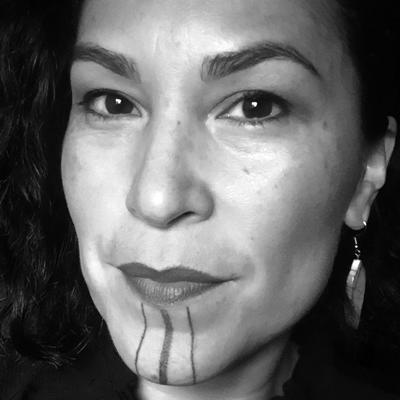 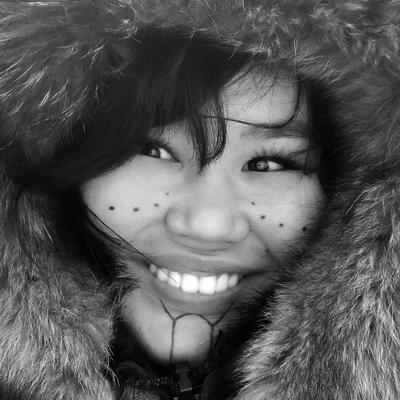 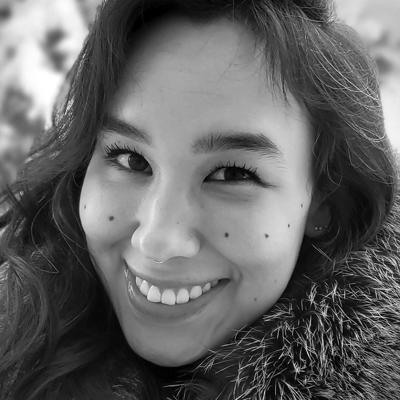 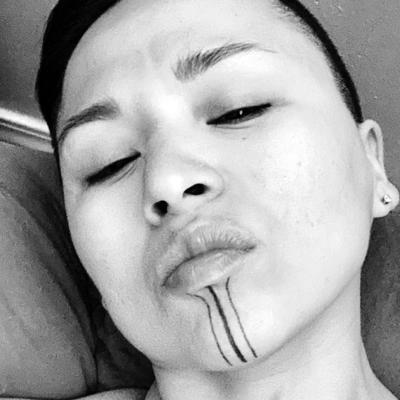 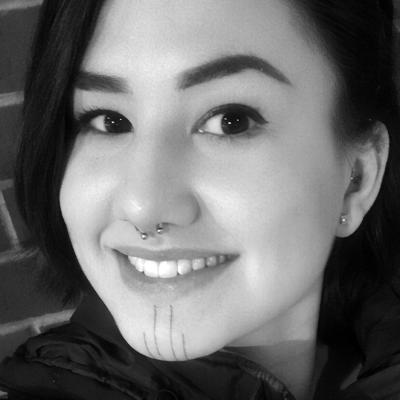 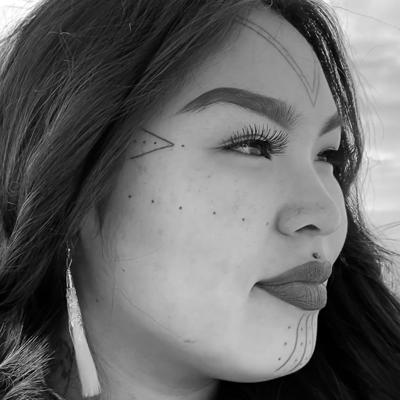 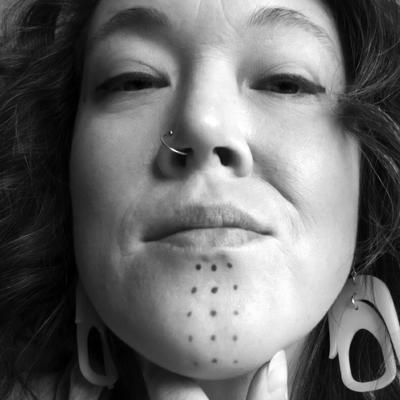 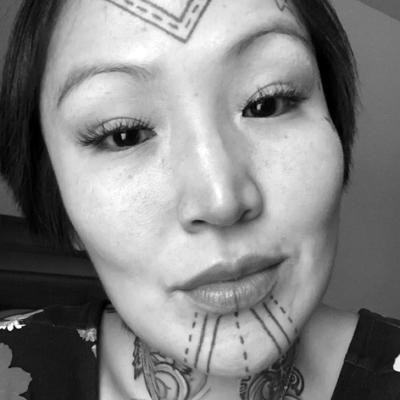 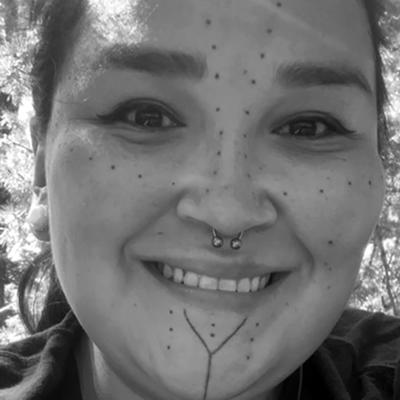 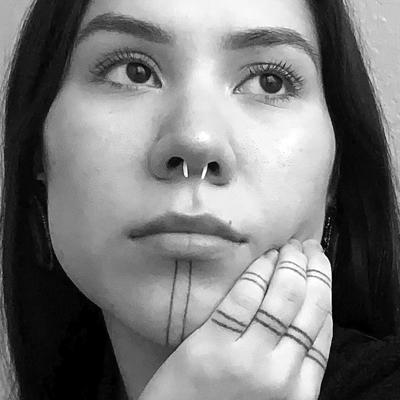 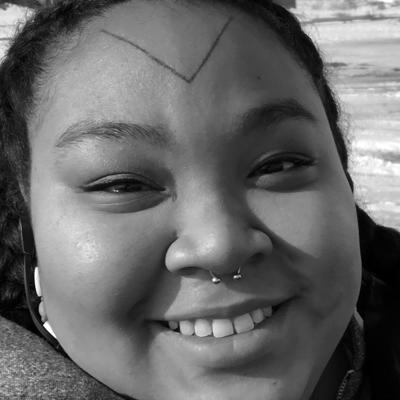 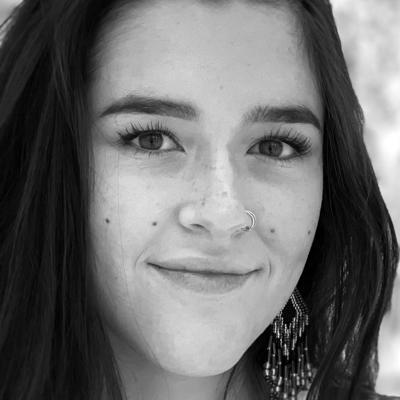 I received my tattoo from Holly Nordlum in 2018 with my mother and Sarah Whalen-Lunn present. My mother was the first in our community to give herself traditional facial tattoos back in the ‘80s. Over the years, I grew to learn more and more, and, in retrospect, understand what a bold statement my mother was making in bringing back this beautiful Gwich'in practice. For me it is a deeply personal marker, not only of my womanhood, but also of my humanity. It’s an outward reminder to the world of the great diversity of our cultures and knowledge systems. For myself, it is a reminder of the spiritual path we journey upon, and it is continuity with the generations of women who came before me.

I received my tavluġun (chin tattoo) by Holly Nordlum in May 2017. I hand poked my iqsraġun (cheek tattoo) in 2019.

Holly Nordlum did my traditional hand-poke tattoos in May 2019 at her Anchorage studio. I was going through a rough time in my life, stressing out about my career path, my identity as a Native woman, and my contributions to my community. I felt lost, like I needed a cultural grounding. I reached out to Holly Nordlum, asking her about Inuit cheek tattoos, and set up an appointment. Holly has always been an inspiration and a mentor to me as an Iñupiaq woman. My best friend from home, Margaret Alice, accompanied me. When we got there, Holly gave me a big hug, started telling me stories and joking around, and she immediately put my nerves at ease. She asked me to imagine all my stresses and anxieties leaving my body with each poke of her needle and I did. When she was finished, I felt proud, lighter and freer. Traditionally, some say that cheek tattoos were meant to ward off evil spirits and promote fertility, but for me, they're associated with my upbringing, which is when I felt most free in the world. They represent a sense of freedom I've only ever felt at home in Utqiaġvik -- freedom to explore, freedom from Western beauty ideals, and freedom from outside pressures.

Jamie Harcharek gave me my first line, and Holly Nordlum did the other two on either side of the middle line. The first tattoo I received on my chin is a representation of accomplishment --of engaging a successful college education and helping compose my first Native song, Yaraq. The anniversary of my first traditional tattoo coincides with a very significant tragedy within my family and community. My other two lines represent becoming a leader in my community. I am a city council member and the founder of the Brown Bear Dancers in Akiak. There has not been a dance group since contact in the 1800s when the missionaries first arrived. My chest tattoo is not a traditional Yupiaq tattoo. It is the tradition of our sisters of Greenland of the North. I was told that it is a representation of one who can take on great burdens. I just recently lost my mother and am the eldest, whose job it is to take care of my family.

Sarah Whalen gave this tattoo to me through traditional hand poke in January of this year. I was thinking about it for a long time. For me, it is about taking myself and my culture back after going through a hard time.

Sarah Ayaqi Whalen-Lunn gave me my tavluġun (chin tattoo) when I just had turned 20. The rest I received over time. Sarah gave me my iqsraq (cheek) markings and the six dots outside of my tavluġun for my birthday last year. My markings are sacred. They allow me to express my soul and culture to the rest of the world. They express different ways to honor my ancestors and family. When I was younger, I was ashamed of being Native. Living in the city, being Native came with negative connotations that included bullying and harassment. When I went back home, I was teased for being too much of a "city girl.” This made me feel like I did not have a place anywhere in this world. As I grew older, I began looking within my beautiful culture for myself. I started to strip away any negative emotions and trauma that I built up from my past experiences. My markings celebrate my journey of healing, protection, and self-discovery. They also serve as a reminder of how strong, beautiful, and resilient my people are. Every day I look in the mirror, and I know I am all of these things. It encourages me to not settle for less, and to carry on traditions for other lñupiat/lndigenous youth, who are on their own journey of healing and finding themselves within their culture.

Holly Nordlum and I tattooed each other's eyes in her home studio on a spring day. A few months later, I woke up and knew it was time to start my tavluġun, which we did in her home studio, as well. Just one row of dots at first. It took me about another year of actually doing the work for other women to know I needed to expand my tavluġun to the three rows of dots I wear now. There are many factors that brought about my decision to wear my traditional markings. One thing I will say is that seeing the strength of the women I was tattooing and the strong need to feel connected to my culture really urged me to wear my markings. It has changed my life and how I view the world, forever.

Everything that has happened to me in life, all the death I dealt with, all the blessings around me, I’ve come to cherish only after losing my daughter. It was my time to show my colors, my heritage, to represent my people. My decision to go tribal was my growth as a woman, where I come from and where I’m going in life.

I received my chin marking in October 2018, and my forehead and cheek markings in July 2019 from Sarah Whalen-Lunn. With these tattoos, I wanted to bring myself to a place of healing and connect to my roots as a Yup'ik woman. When I received the tattoo, it felt like all she did was reveal what had already been there. It didn’t feel like she marked me, it felt like all she did was wipe away, and they appeared. It felt like I had these my whole life, and I was just hiding them.

Sarah Whalen-Lunn was the one who gave me my tavluġun (chin tattoo) in September of 2018 and my sassuma arnaa (finger tattoos) in January 2019. My traditional tattoos are something very personal and sacred to me, and a completely different mental and spiritual process than any of the other 15 tattoos I have. I receive lots of questions about them, but I'm not always inclined to share my story with everyone who asks. Thankfully people are kind. My tattoos have been a way for me to connect to not only other Inuit people but other Indigenous groups who are reclaiming and reconnecting through the revival of traditional tattoos. My favorite memory is having my hands held by young Iñupiaq girls while they ask me about my tattoos and asked if they could get them, too. That is probably the most exciting and fulfilling part, the connections I make with other Indigenous people through my tavluġun and sassuma arnaa.

When I looked at my face, I knew they were always there. I want my nieces and nephews to boldly walk in their Yup'ik identity, so I decided to also, by getting my tattoos.

My cousin, Holly Nordlum, gave me my tattoos. I got them during my first Christmas break home from college. Being in a different state pushed me to get them younger because they reminded me of home and family. I have known since I was in high school that I would get tattoos eventually. I also have a lot of people in my life who inspired me to get them.