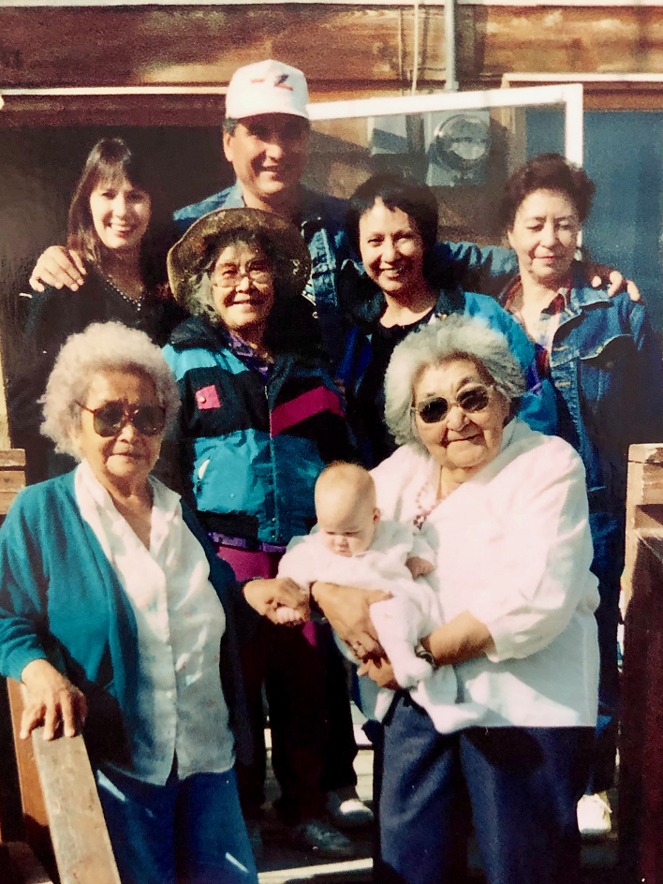 Lovelace’s artistic practice is shaped by her mediation of various worlds, by her Tlingit culture, and by her mother. “My mom was a little bit like the Muhammad Ali of Indians…she helped me to understand how special and significant it is to come from the family and the culture that I was blessed enough to be born into.” Through time spent playing cards, sipping tea, and listening to stories told by Elders, Lovelace fell in love with the Indigenous narratives that surrounded her.

It wasn’t until a chance encounter at the Anchorage Museum in her mid-20s that Lovelace found carving, which would become her principal medium. This “aha moment” occurred during a live carving demo in the atrium with master artists Dempsey Bob and Nathan Jackson. She recalls that the two men seemed to be full of joy, carving and adzing together while they talked and laughed. She wanted to a be a part of it.

The only tools available to her at that time were Western-style, flex-cut gouges. She tried to mimic the forms she saw in books on Northwest Coast art, but these tools were ill- suited to carving the deep, curvilinear shapes needed to create masks and bowls in the Tlingit style. Eventually, she was able to attend a class at the Alaska Native Heritage Center with David Boxley. There, she learned how to use traditional carving tools such as crooked knives and adzes. She worked on her first mask for over a year, painstakingly shaping it to be as thin and light as possible. 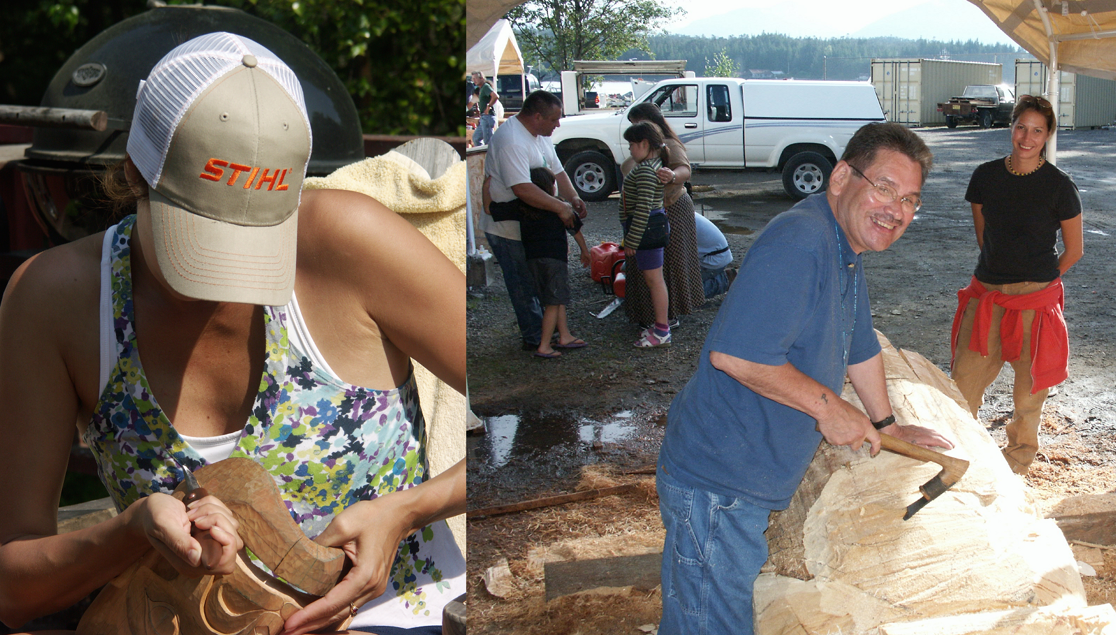 Lovelace carving mask with crooked knife and standing with Master carver Frank Perez, as he adzes in Ketchikan, Alaska.

Today, Lovelace works with a broad array of materials such as alder wood, stone, and stainless steel. She has even recently experimented with the use of fiber-optic cables. Seeing herself on a continuum that ties her to both past and future Tlingit makers, she says: “not only is it our right, but it is our responsibility to push forward and continue the narrative––not just repeat, parrot, mimic, and reproduce.” She is drawn to the power and magic she sees captured in Northwest Coast art, while also honoring and recognizing her perspective as a modern-day woman influenced by present concerns.

For example, her recent work Predator Cannibal Mask, a “supernatural modern-day myth of my own making,” is inspired by stories of her great grandfather, a tribal shaman during the first waves of colonization in British Columbia. At the same time, the piece grapples with injustices driven by 21st-century capitalism and colonialism. In her view, the predator cannibal is a supernatural force seeking to annihilate destructive impulses of all kinds. This could be anything from the killing and rape of Indigenous women, to predatory lending taking advantage of the poor. The predator cannibal “takes care of people, heals them, helps them let go of the burden of trauma…helps make people whole.” 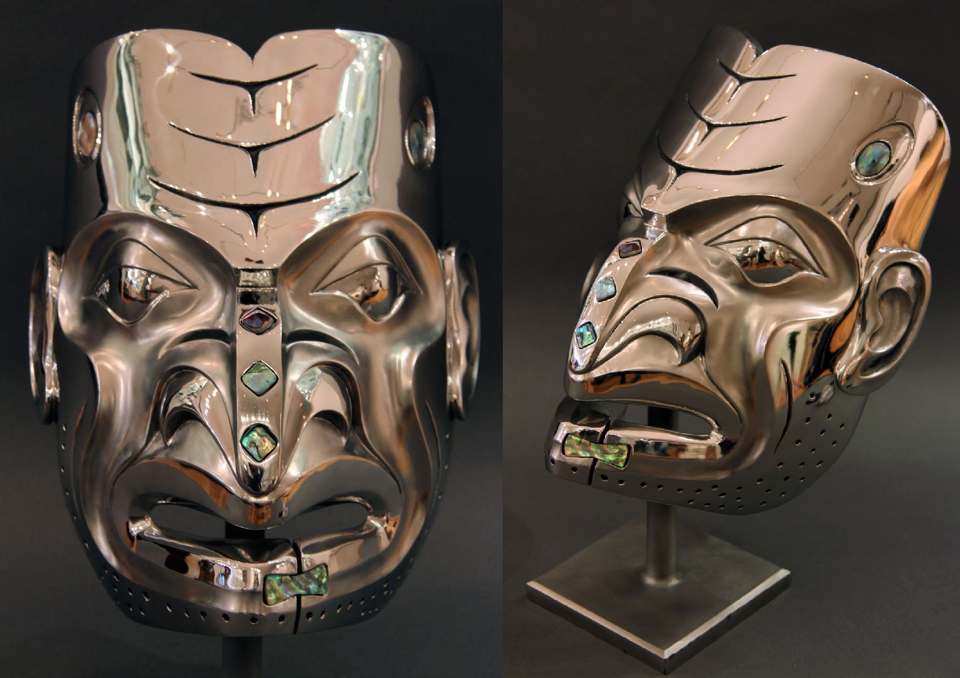 One of the most striking features of this work is the decision to cast it in stainless steel. For Lovelace, steel is the material that has most profoundly shaped our physical worlds and cultural identities over the last century. At a time when many contemporary artists are making intentionally ephemeral, anti-archival work, Lovelace wanted to create something that would likely endure for thousands of years. In many cases traditional Tlingit art made of natural materials has suffered physical degradation due to it being plundered or improperly stored. Under colonization, its physical permanence has always been under threat. Lovelace’s Predator Cannibal flips that narrative. He is a fierce warrior brimming with ancient wisdom and armed with the technology of the present. He shows a way of being that might help guide us towards a future endowed with Indigenous values of reciprocity, compassion, and respect for the natural world. Lovelace’s creation deliberately functions as a kind of superhero summoned to confront current injustices. As Lovelace wryly suggests: “Who’s to say that all the best myths and legends and all the best art has been made or told already?” 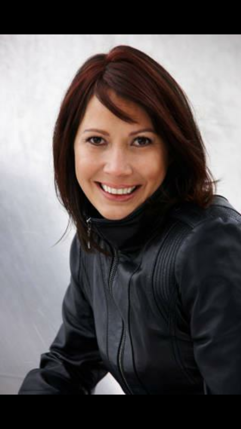 This summer, with support from The CIRI Foundation, the Anchorage Museum will be hosting three virtual artists-in-residence. Follow the museum on Facebook, Instagram and Twitter to learn more about Robin Lovelace’s artwork and process for the month of July and early August.