We are sad to say farewell to our friend, Teri Rofkar, who died last week.

One of the most recognized Tlingit weavers and basket makers on the Northwest Coast, Teri created works that capture and interpret the woven art forms of the Tlingit people. Her works include spruce root baskets and wool regalia ranging from medicine bags to robes. Using traditional styles and techniques, Teri is best known for her Raven’s Tail robes, three of which were on view in her solo exhibition at the Anchorage Museum in 2005.

Weaving in the Raven’s Tail style is an ancient art that was revived at the end of the 20th century by a few devoted and talented weavers. The weaving is not done on a loom but is done with two-and three-strand twining common in basketry. Teri said she spent about an hour on each row of weaving and from 600 to 2,000 hours on a single robe, depending on the complexity of the pattern and size of the piece. Older Raven’s Tail robes are extremely rare and only a few are found in museum collections.

The robe pictured below was one she wove commemorating the Good Friday earthquake, and its patterns and symbols evoke the story of the March 27, 1964 earthquake. It was commissioned as part of Alaska’s 1% for Art Program for a new terminal that opened in 2005 at the Ted Stevens International Airport. 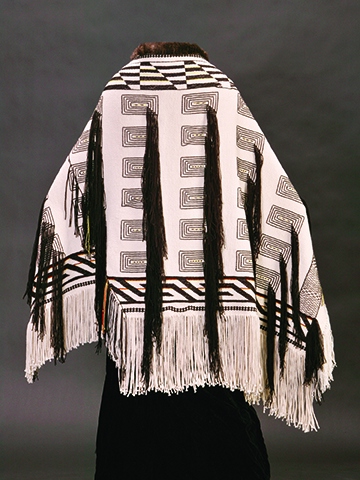