Quki/Golga Oscar on Authenticity, Clothing, and What it Means to be Yup’ik

Artist Quki/Golga Oscar was raised between his mother’s community of Kasigluk and his father’s community of Tununak, in Southwest Alaska. He grew up speaking Yup’ik and participating in subsistence activities with his family. He also learned to skin sew, weave grass baskets, and bead from his mother and grandmother. Although he describes himself as a productive child who enjoyed creating things with his hands, it wasn’t until he experienced a traditional Yup’ik ceremony in his father’s village that his identity as an artist began to take shape.

During the midwinter Messenger Feast of Tununak, people from surrounding villages gather to dance and celebrate with songs and traditional regalia. Seeing and participating in this ceremony inspired Oscar to “pursue my cultural identity and what it means to be Yup’ik.” He began experimenting with creating garments and adornments, learning through careful observation of his elders. He gradually acquired the skills necessary to create parkas, mukluks, and kuspuks, as well as beaded and quilled necklaces, headdresses, and dance fans. 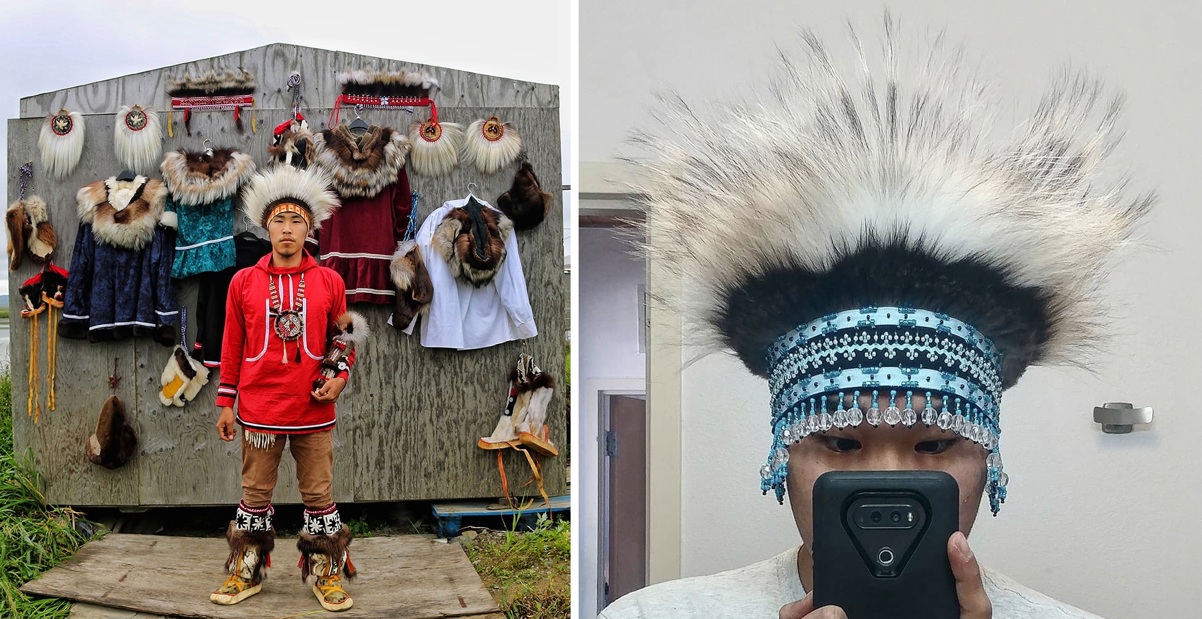 Left: The artist with some of his creations. Right: the artist modeling a Yup’ik headdress.

Oscar sees these adornments as expressions of cultural pride and Indigenous resistance to colonial forces. During the winter, instead of Western-style snow pants and boots, he “tries to wear my mukluks every day. Because it’s who I am as a Yup’ik person.” He encourages others to use these handmade garments in everyday life, too, rather than storing them away in closets for special occasions: “The more I wear my mukluks the more I notice other people wearing theirs, which really brightens up my life and my thoughts.” He notes that one of the most important pieces of advice he received was from Iñupiaq/Athabascan artist Sonya Kelliher-Combs about how things are meant to be worn. She told him that garments are made for a reason, that the animals are meant to be used. By using them, you are honoring them. It’s showing respect for the animal and what you’ve made from it, wearing it as much as you can until it wears out. Each garment that Oscar creates is imbued with these Indigenous values and ethics, expressing care for the land, and serving as an outward symbol of the beauty and resilience of Yup’ik culture. 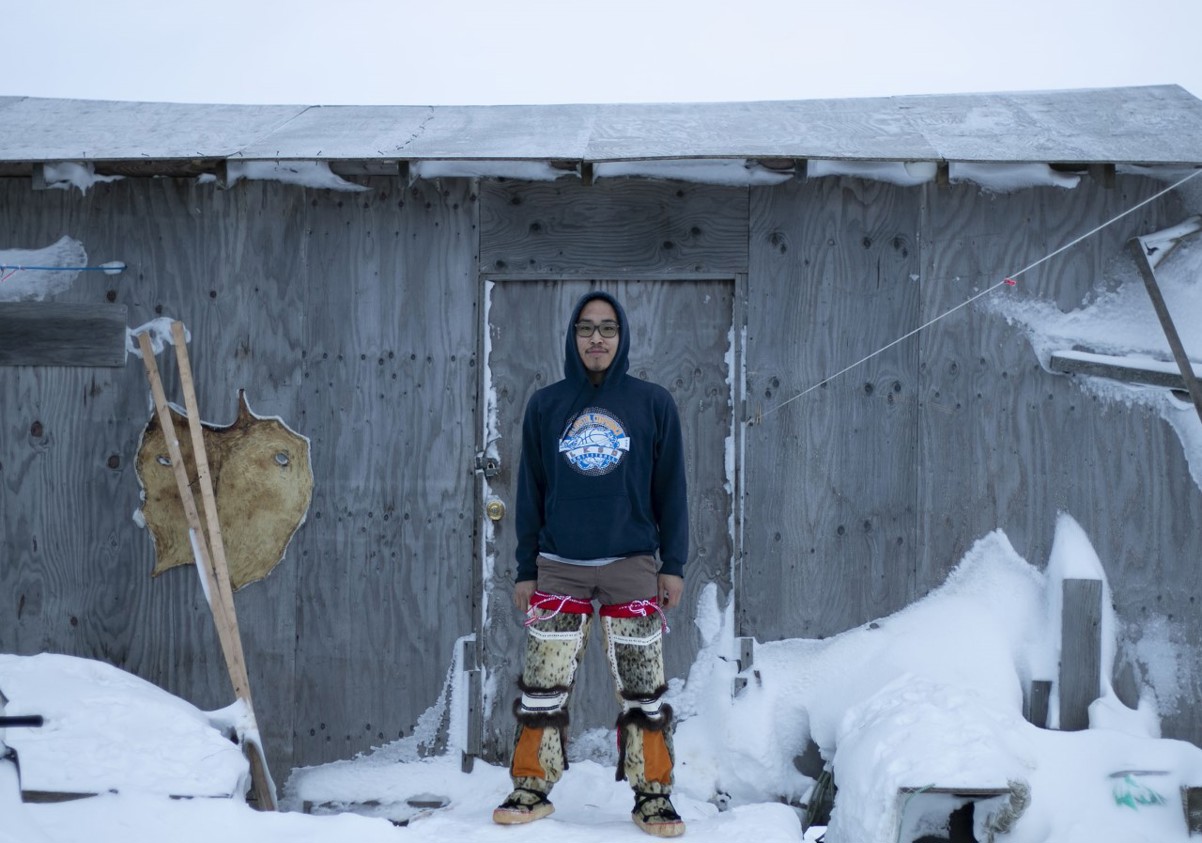 Golga Oscar in thigh-high mukluks. He developed the design through internet research and looking at books on Inuit material culture.

These ideas are further underscored by the presence of seal imagery in many of his works. Oscar feels particularly connected to the seal, which he sees sometimes in his dreams and regards as a passionate, wise animal. One of his favorite Yup’ik stories tells how seals have sod houses under the water and carefully watch how people act on the land—how they treat other people and their surroundings. Oscar says he thinks about this story when he wakes up in the morning. It reminds him to treat his surroundings with respect, because “everything on Earth is living and has a soul.” 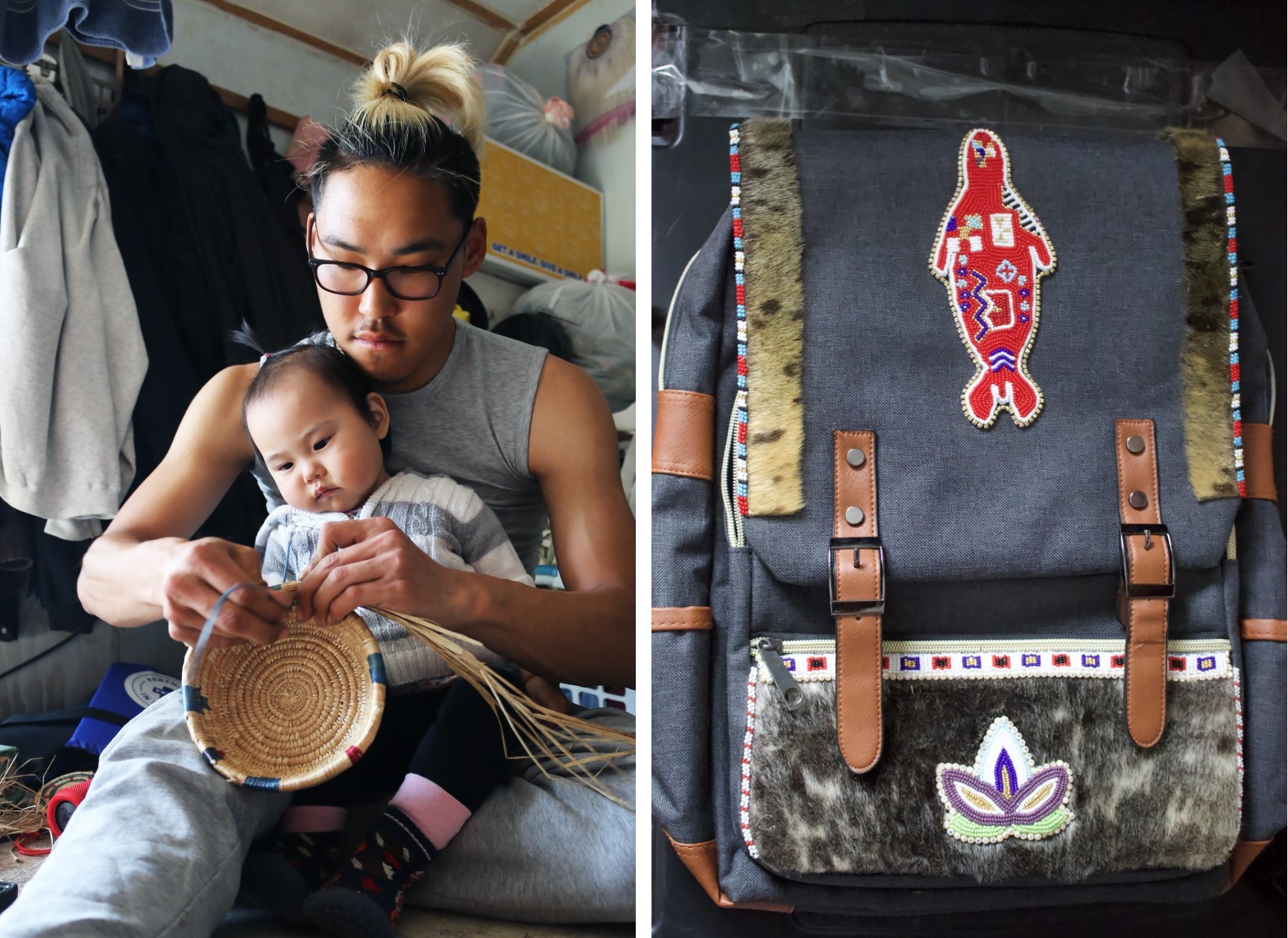 Left: the artist and his niece. Right: a backpack embellished with a beaded seal and seal fur.

Questions of identity are deeply enmeshed with Oscar’s artistic practice. As a two-spirit gay man, Oscar says that he is “humbled to experience both gender roles,” creating work that “honors both of my identities along with giving credit to my ancestors.” Although some may associate sewing and beading with ‘women’s work,’ Oscar emphasizes that this is a colonial perspective, influenced by Christian doctrines. For his ancestors, gender roles were more fluid and expansive. He emphasizes that he has been fortunate to be fully supported by his family and friends on his journey of self-discovery, and endeavors to provide this kind of support for the young people he now mentors as a teacher in the Lower Kuskokwim School District. “I share my work with them, share my journey, share my knowledge. I try to show how one can pursue their authentic identity despite colonialism.”

Header image: Quki/Golga Oscar in clothing he created and embellished.

Support for this Virtual Artist Residency has been provided, in part, by the Art Bridges Foundation. Follow along with Quki/Golga Oscar's residency for the month of June via the Anchorage Museum’s social media channels. Stay tuned for his livestream studio demo in late June, and be sure to check out his work on display this summer at the Anchorage Museum, June-August.