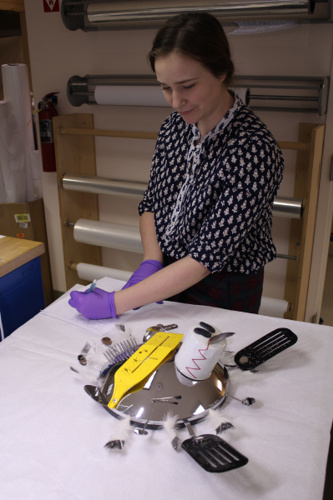 This is a mixed media piece made using found objects. Beck produced multiple pieces in this style using objects he found in his urban landscape. He often used materials he found in junk yards and second-hand stores. When writing a condition report or cleaning an object that was made using found objects, there are certain things that must be kept in mind; it is possible that any damage such as dents, scratches, rust, or cracks occurred before the component was added to the piece. If that is true, then it is an inherent element of the piece and should not necessarily be treated. In situations like these, conservators need to be detectives and comparison to previous reports and photos are their best resources. Punk Nanuk Inua is on display in the Art of the North exhibition. Give it a closer look next time you are in the new wing.