Mariza Ryce-Tovar on art, healing, and the natural world

Artist Mariza Ryce-Tovar grew up around artists and makers who nurtured her creativity and fostered a strong connection with nature. Her family, who are a mix of Mexican (Wixárika and Chichimeca) and American (Mohawk) lineages, raised her with ceremonies honoring land and relationships with the natural world. In the summers, Ryce-Tovar and her family would travel from Southern California to Montana, North Dakota, and Alberta, Canada. Her early artworks reflected the plant and animal inhabitants of these regions: flowers, eagles, horses, and buffalo.

Left: Ryce-Tovar with the two women that raised her, her mother and aunt. Right: a drawing made at age six of a teepee from ceremony with an eagle clenching lighting in its talons, a motif that appears in Ryce-Tovar’s recent illustration projects.

Ryce-Tovar notes that her upbringing, influenced by both sides of the Mexico-US border, has at times made it difficult to articulate her identity. Tribal affiliation is expressed differently in Mexico than in the US, and, through her experience of intertribal ceremonies, her cultural perspective has been shaped by diverse northern and southern influences of Indigenous Native America. Her experience taught her that many of the practices she was raised with are “all kind of the same prayer, the same communion and communication…I feel fortunate to have that as my backbone. It influences everything I make.”

Reflecting a sense of spirituality in her artwork is important to Ryce-Tovar. Mental health, self-awareness, and care for the natural world are values that she seeks to communicate and affirm. Her most recent project, a tarot deck called The Gentle Tarot, combines her interest in the natural world with her desire to make experiences of healing and self-discovery accessible to all people. The imagery of the tarot deck features Alaska flora and fauna, inspired by the seven years she spent working in biology data collection for the Alaska Department of Fish and Game in Kodiak, the Alaska Peninsula, and Unalaska. Her time in summer field camps counting salmon and living completely off-grid, in what she describes as “the most beautiful places I’ve ever seen” gave her the space to find her voice as an artist and translate that into tangible form. 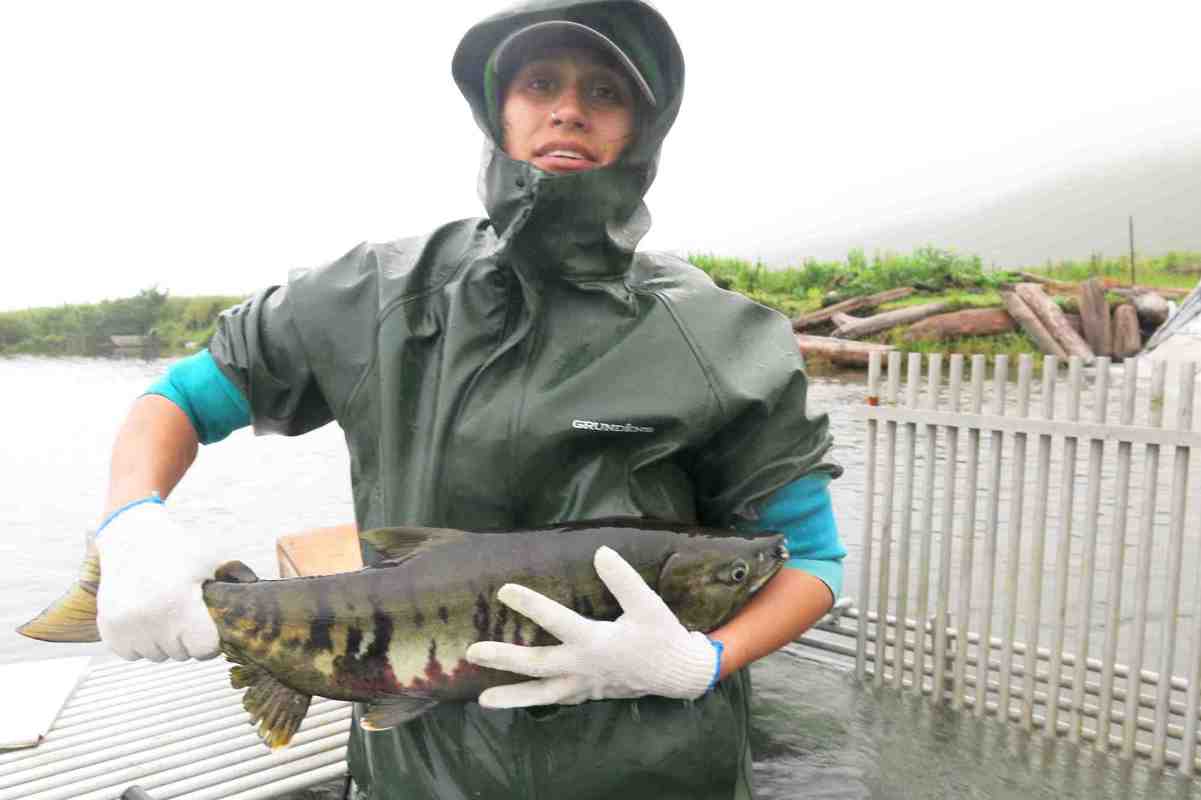 Ryce-Tovar collecting data on wild salmon for ADF&G at the Orzinski River on the Alaska Peninusla.

Ryce-Tovar decided to make a tarot deck last year after using a fellow ADF&G co-worker’s deck at field camp. She didn’t connect with imagery of the deck — it was very dark and often bloody, but she was drawn to the idea that tarot could be a tool for meditation and self-reflection. She started creating her own illustrations for each card, drawing on the surrounding Aleutian scenery. “It’s not very overt…not like the tarot deck is anti-capitalist, anti-white supremacist, anti-colonialist, but it’s guiding someone to connect with themselves, to listen to their heart, and to be true to themselves.” Although on the surface it may not sound radical, Ryce-Tovar believes this form of self-awareness offers pathways to resistance and liberation from oppressive social and political structures: “When we really believe in ourselves and we strive for our full potential we are resisting….especially Indigenous people, or others who have been oppressed…if we are able to stay true to our fire, that is our way to wholeness.” Ultimately, she believes, this is the kind of awareness we all need to cultivate in order to remember our connection to the planet and to take better care of it. 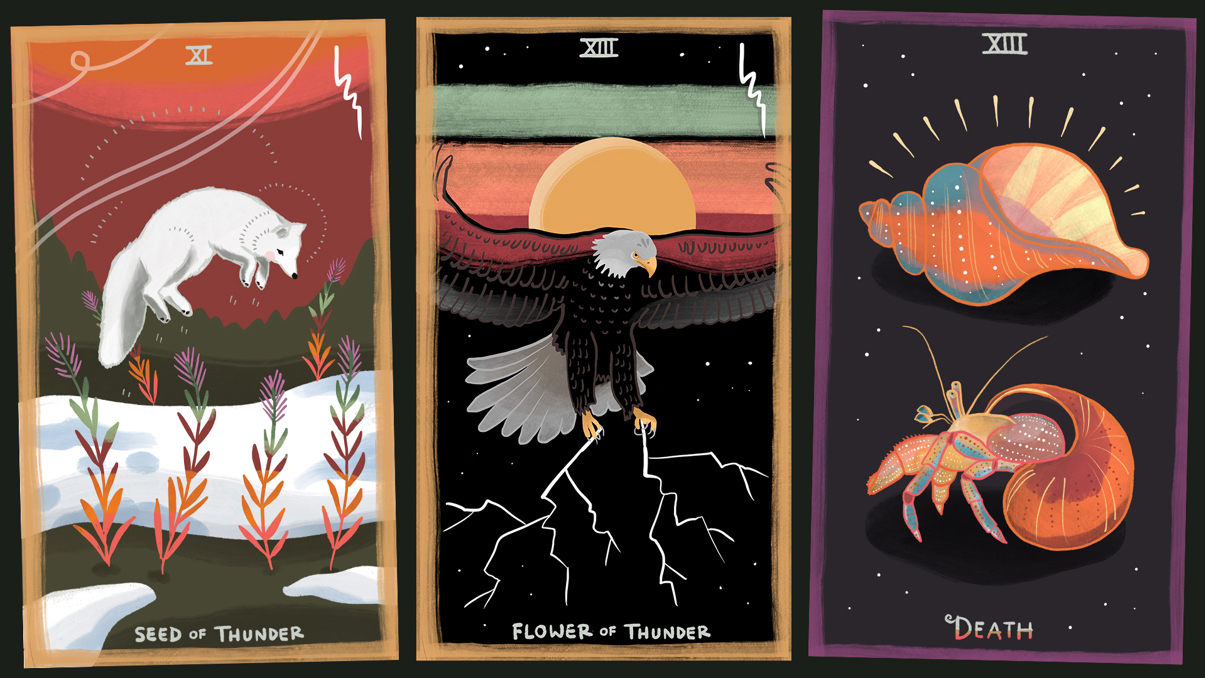 Illustrations from The Gentle Tarot

Ryce-Tovar is now working full-time as an artist based in the Homer area. She creates her work digitally, using an iPad and Procreate software. Although working on a screen is sometimes challenging for her, she says working digitally has removed barriers to getting her ideas “on paper,” and that she enjoys the freedom working in this mode offers. She is currently working on a companion deck of cards for The Gentle Tarot and exploring future projects in children’s book illustration. The pandemic, she says, helped her learn to set healthy boundaries and to prioritize her passion of art-making: “It’s easier to say ‘no’ now. Time goes by and if we don’t do what we love, time will keep on going by.” 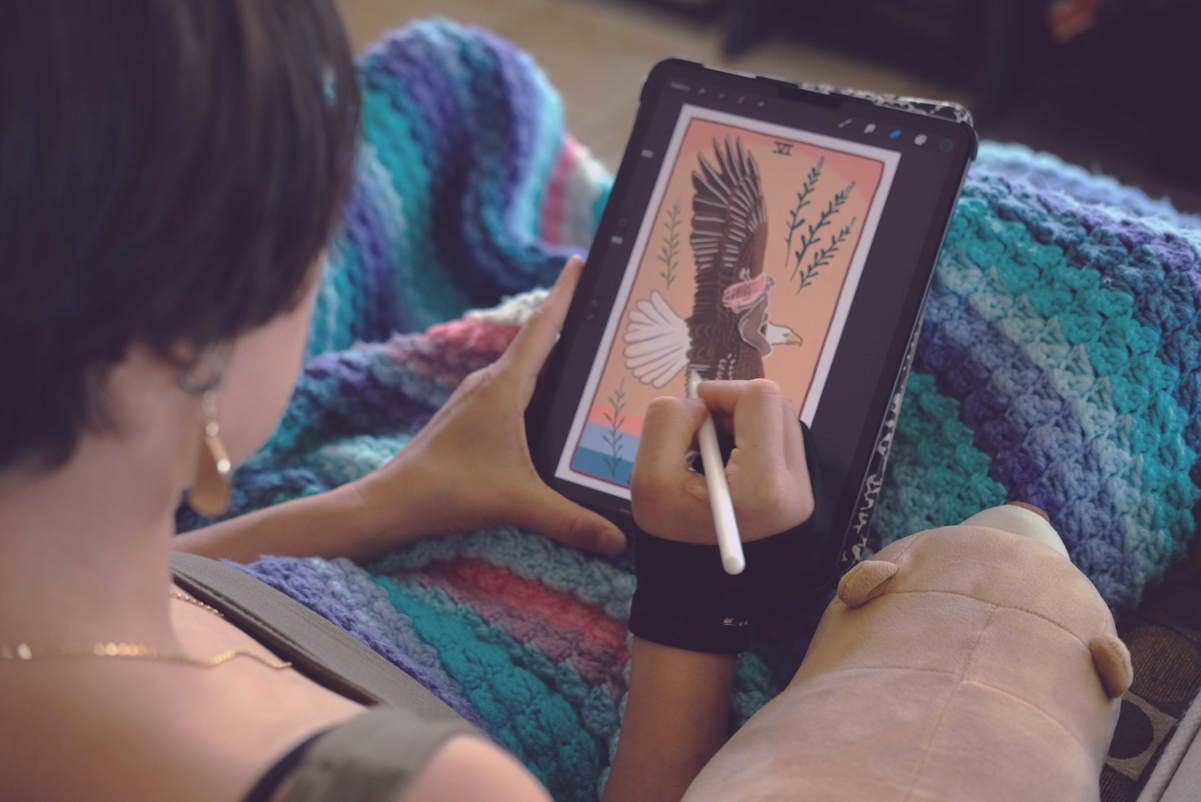 Ryce-Tovar in her studio illustrating using Procreate on the iPad.

Hero image: Artist taking a break while at work for the Alaska Department of Fish and Game in Wislow, Unalaska.