Each object on view in the upcoming Alaska exhibition tells a story – or in the case of this Alutiiq hunting hat, multiple stories, including one of conservation of cultural property and another of an unprecedented museum partnership.

This Alutiiq hat was consigned for sale in a tribal arts auction in 2004. Recognizing the cultural significance and the rarity of the hat – and its importance to the Alutiiq people – the Alutiiq Museum of Kodiak and the Anchorage Museum joined forces, mounted a fundraising effort and pooled their acquisitions resources to purchase the hat. The museums’ bid was successful, and today the hat is owned jointly by the two museums.

There are very few hats such as this known to exist. Three exist in U.S. museums, and one is in a private collection. This hat was once owned by the Rev. Andrew P. Kashevaroff, a Russian Orthodox priest and the first curator of what became the Alaska State Museum in Juneau in the early 1900s. Kashevaroff’s family was part Russian and part Alaska Native. Although owned by the family, we do not know if the hat was a family heirloom, if it was collected by Kashevaroff’s father or grandfather (both Russian American Company employees), or if Kashevaroff himself collected it while serving in various Alutiiq villages in the late 19th and early 20th centuries. Kashevaroff’s descendants brought the hat to the Alaska State Museum in the 1980s or 1990s for examination and later offered it for sale. 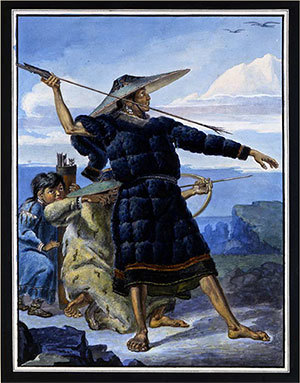 The Alutiiq region includes the islands and coastal country of southern Alaska from the Alaska Peninsula to Kodiak Island, the Kenai Peninsula, Cook Inlet and Prince William Sound. Today, more than 3,100 Alutiit live in villages, towns and cities along the central portion of the Gulf of Alaska. Others now reside outside the region but look back with pride to these Alaska shores as their true homeland.

Who used the hat?

Traditionally, Alutiiq men were brought up to hunt at sea for sea mammals from a baidarka – a very light, fast, skin-covered kayak. A variety of elaborate head gear, including woven spruce root hats, were worn while hunting in baidarkas and open boats.

Who made the hat?

Alutiiq women skillfully wove hats (and baskets) from spruce root. Weavers added dentalium shells, glass beads and bundles of sea lion whiskers, showing the owners’ skills as a hunters. Painted designs were distinctive. The design on this hat features a toothy creature that probably represented a predator spirit whose assistance was invoked by the hunter. 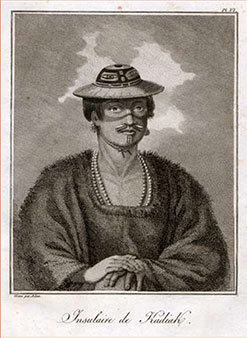 Kodiak Islander, engraving based on a drawing from the 1785-1794 Billings Expedition. Published in Martin Sauer, Voyage Dans Le Nord, Paris, 1802.

A new way of working together

Upon taking the hat into the museums’ collections, museum staff noted the hat needed some light cleaning and minor repair to help preserve it and hired a conservator. The museums worked together to develop an agreement to ensure the hat’s preservation and guide its rotation between exhibit periods in Kodiak and in Anchorage.

The joint ownership by two museums of a Native American object of great cultural significance was, at the time, without precedence. It represents a new way for Native peoples and museums to work together to preserve Native heritage and to hold the cultural treasures of indigenous peoples in their own regions.

Preservation is the protection of cultural property through activities that minimize deterioration and damage and prevent loss of informational content. The primary goal is to extend the life of cultural property and to preserve the object for future generations. Conservation is the profession that is devoted to preservation. Conservation activities include examination, documentation and treatment. These activities are often supported by research, education and collaboration with other specialists. 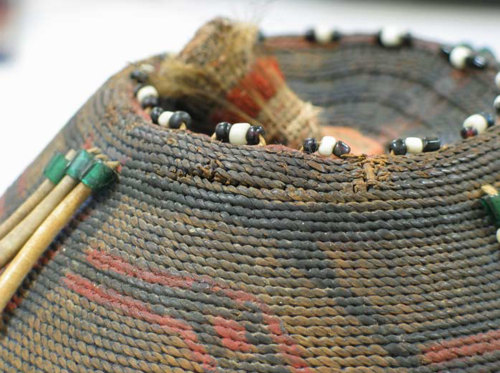 Results of the hat's initial evaluation

A tear and associated break in the spruce root basketry near the top of the hat suggested it endured an accident, possibly from a sharp object. Light cleaning and minor repairs were recommended.

Preservation plan for the hat

The treatment approach began with an evaluation of all materials in the hat. Condition issues such as extent of losses, fading and damage were assessed. Insect debris and damage to the wool were found around the hat. Overall, the hat was determined to be structurally sound.

The mystery of the tassel
Another area of conservation concern was the tassel at the top center of the hat. It consists of multiple materials – an unknown material, gut, wool, hair and thread. Before formulating a plan to stabilize and clean the tassel, the unknown material inside the tassel had to be identified. 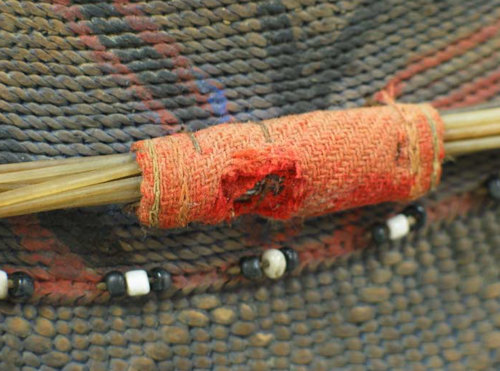 What we learned from an x-ray
The hat was taken to Providence Hospital radiology department in May 2006, and x-ray images were taken of the tassel. The images showed a fairly uniform material with lower density compared to bone. It may be wood or some other hard material that could be carved into the tassel shape. 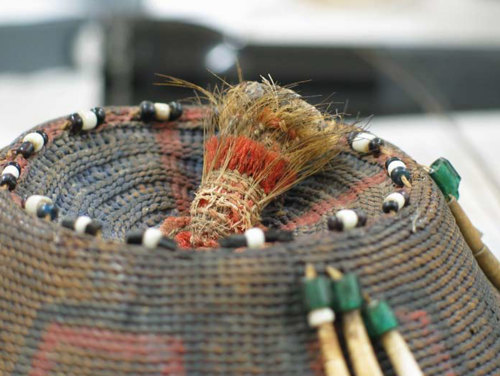 The hat will be on view for 18 months in the new Alaska exhibition which opens Sept. 15, 2017, on the museum’s second floor. After that time, it will be available for research while not on view. It will then travel to the Alutiiq Museum where it will remain for two years before returning to Anchorage.