Earthquake Repairs to the Living our Cultures Exhibition

The Anchorage Museum and the Arctic Studies Center recently hosted an expert “earthquake relief” team of collections and conservation staff from the National Museum of Natural History (NMNH) and National Museum of the American Indian (NMAI), who came to Anchorage on February 24 to prepare for repairs to the Smithsonian exhibition Living Our Cultures, Sharing Our Heritage: The First Peoples of Alaska.

Glass end-panels on three of the large exhibition cases cracked during the major earthquake that struck Anchorage on Nov. 30, 2018, and the objects they contained needed to be carefully removed and placed in temporary storage before case repairs could begin. 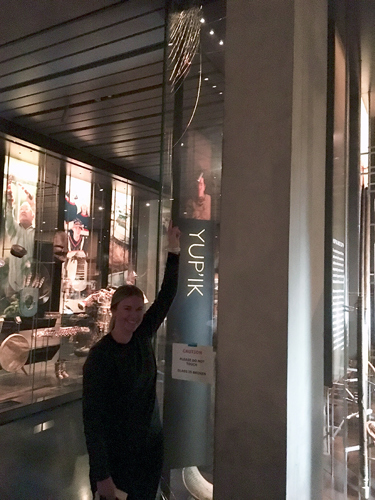 Assessing repairable cases and irreplaceable art
Kelly McHugh and Adrien Mooney from NMAI, along with Dave Rosenthal, Kim Cullen Cobb, and Allison Butler from NMNH, worked with the Anchorage Museum’s Director of Collections and Chief Conservator Monica Shah and her staff to deinstall 211 objects from the Yup’ik, St. Lawrence Island/Siberian, and Sugpiaq/Unangax^ cases and to assess all 600 objects in the exhibition for any evidence of earthquake damage. Anthropology Department chair Igor Krupnik visited to review the work in progress and to plan additional NMNH staffing commitments needed to complete the project.

The Smithsonian team flew back to Washington DC on March 3 at the end of a very productive week and returned to Anchorage in early April to reinstall the objects. In the interim, exhibition fabricators KubikMaltbie removed and replaced the broken glass panels – each weighing about 1500 lbs. – using specialized tools and lift equipment.

The gallery, which had been closed since Nov. 30, reopened April 13, in time for the first spring visitors and to welcome the Smithsonian National Board when it meets in Alaska during July 21-26.

Anchorage-wide damage but a surprisingly good outcome
The magnitude (Mw) 7.1 earthquake on Nov. 30 was an unsettling event, even for Alaskans used to frequent earth tremors, and caused great concern for the safety of the irreplaceable Alaska Native heritage art that is displayed in Living Our Cultures.

Anchorage and surrounding areas experienced 30 to 60 seconds of severe ground shaking followed minutes later by a strong Mw 5.7 aftershock. The strength, proximity of the epicenter (about 10 miles north of the city) and relatively shallow depth of the earthquake accounted for the nearly $100M in damage it caused to local roads, the Anchorage airport, schools, public buildings, and homes.

Fortunately, no buildings collapsed, no lives were lost, and there were surprisingly few injuries. Post-quake settling will continue for months and has caused swarms of aftershocks. From December through February the U.S. Geological Survey’s Alaska Earthquake Center recorded over 350 perceptible tremors in the Mw 3.0-5.0 range.

Newer additions to the building, including the 2010 wing that houses the Arctic Studies Center, stood up exceptionally well due to modern seismic building codes that were adopted after the devastating Mw 9.2 Alaska earthquake of 1964 (152 times stronger than the November 2018 event). Nonetheless, swaying of the building caused the exhibition cases in Living Our Cultures to torque slightly in an east-west direction which caused the glass breakage.

Engineering helped save objects from damage
Most importantly, no Smithsonian objects were damaged, which is a great tribute to the extensive seismic engineering that went into design of both the cases and the pole-and-bracket support system on which the objects are mounted.

Recognizing that Anchorage is an area of “high seismic vulnerability” with over 40,000 detectable earthquakes per year and occasional very large ones, exhibition designers Ralph Appelbaum, Inc. case builders ClickNetherfield, and KubikMaltbie produced cases that are suspended from steel beams in the ceiling of the gallery and only partially anchored to the floor, allowing all but the glass panels on the ends of the cases to move independently and thus to not be damaged by opposing motions of the two levels. Because of this design, cracking was limited to end panels only, and only a few of those.

Inside the suspended cases, which weigh several tons each, the vertical support rods are tensioned and cross-braced to dampen out vibrations and to minimize shaking of the fragile objects. Extra-strong steel, brass, and plexiglass mounts were crafted to securely but softly grip and support each item. Very heavy objects such as stone lamps or large pieces like fur parkas required special attention to the strength and stability of the mounting system.

Coming through unscathed
The system has been “tested” periodically by earthquakes since it was installed in 2010, including three local temblors greater than Mw 5.0 and a relatively distant Mw 7.1 in January 2016 (epicenter 165 miles SW of Anchorage). None of these events caused any damage to the Living Our Cultures objects or cases.

During the Nov. 30, 2018, quake, peak ground acceleration at the museum was measured at .27 g (g = gravitational acceleration) by the USGS, higher than in previous events but still well below the 1.0 g design specification used in designing the cases. Other than a Yup’ik hunting visor that partially escaped its mount but did not fall, and a Haida mask that shed an easily replaced feather, the entire exhibit collection came through unscathed. We may conclude that the Living Our Cultures exhibition has passed its most severe seismic test to date with flying colors, and that it could in fact withstand much more.

Fortunately, the outlook for recurrence of a truly massive “great earthquake” like the one in 1964 is six to eight centuries in the future, according to paleo-seismological studies of earthquake cycles in southern Alaska.

Restoration complete
Following the great work accomplished by the Smithsonian conservation team, members of the Smithsonian Council for Arctic Studies (SCAS) toured the gallery with ASC-Alaska Director Aron Crowell and Monica Shah to learn more about the restoration project. The SCAS is a dedicated friends circle that has contributed substantially to Arctic Studies Center public programs and educational outreach.

Peter Michalski, Morgan Christen, and Douglas Veltre joined the tour along with visiting ethnologist Koji Deriha (Hokkai-Gakuen University) who has comparative experience of earthquake impacts to museums in Japan. All were pleased to see the great care that the Smithsonian and Anchorage Museum have taken to prepare for natural disasters and to preserve their precious cultural collections.