When this Yup’ik fish skin bag came off display from the former Alaska Gallery we noted there was a significant amount of damage and debris from a previous insect infestation. Insects are attracted to protein-based materials, including fish skin, as a source of food. The bottom of the bag had a layer of frass (insect excrement) and loose scales that had been detached by the insects’ grazing. After receiving object cleaning training, we gently brushed the loose frass from the interior and exterior into a low-suction vacuum. The hose was covered in a fine netting to catch the detached scales so they could be collected and saved for later scientific analysis. The bag is so large it required two people and multiple days to clean, but now it is in good condition and safe in storage and ready for future exhibition. 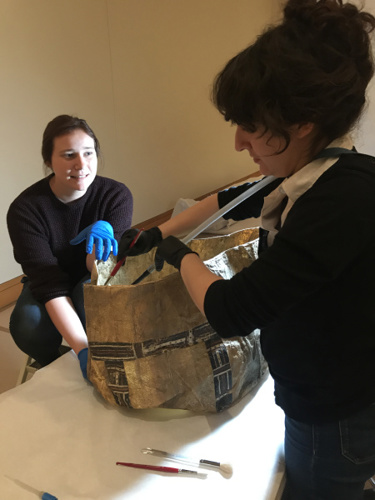